A conch shell believed to have been used as an instrument by prehistoric people 18,000 years ago was tried out by a French horn player, and was found to still be capable of creating music, numerous sources reported.

Archaeologists originally found the seashell inside a French cave with prehistoric paintings in 1931, and it was believed to be a ceremonial cup with a hole that was caused by accidental damage, NPR reported.

Shellabrate: A large conch shell overlooked in a museum for decades is now thought to be the oldest known seashell instrument. Researchers estimate it to be around 18,000 years old. A French horn player got the shell to produce C, C sharp and D notes. https://t.co/2uH3gVFEmt #odd

But 80 years later, archaeologists from the University of Toulouse recently determined that the shell being kept at the National History Museum of Toulouse was actually modified thousands of years ago to serve as a wind instrument, their findings, published in Science Advances, explain. A French horn player was invited to play it, and was able to produce clear C, C sharp and D notes, according to the Associated Press.

The archaeologists were initially worried that any pressure could damage the shell, so they only asked the musician to produce a few notes. (RELATED: Police Recover 500-Year-Old Stolen Leonardo Da Vinci Painting Of Jesus In Italy)

“For me, it was a big emotion,” Carole Fritz, a prehistoric art specialist, said about the moment the musician blew into the shell, according to NPR. “A big emotion and a big stress.”

Fritz and her colleagues say that the pointy end of the shell was deliberately punctured, and they found remnants of a brown substance that they believe was a resin or wax used to attach a mouthpiece, according to NPR. There were also two other holes drilled in parts of the shell that would allow for a tube to come straight down from the mouthpiece into the interior. 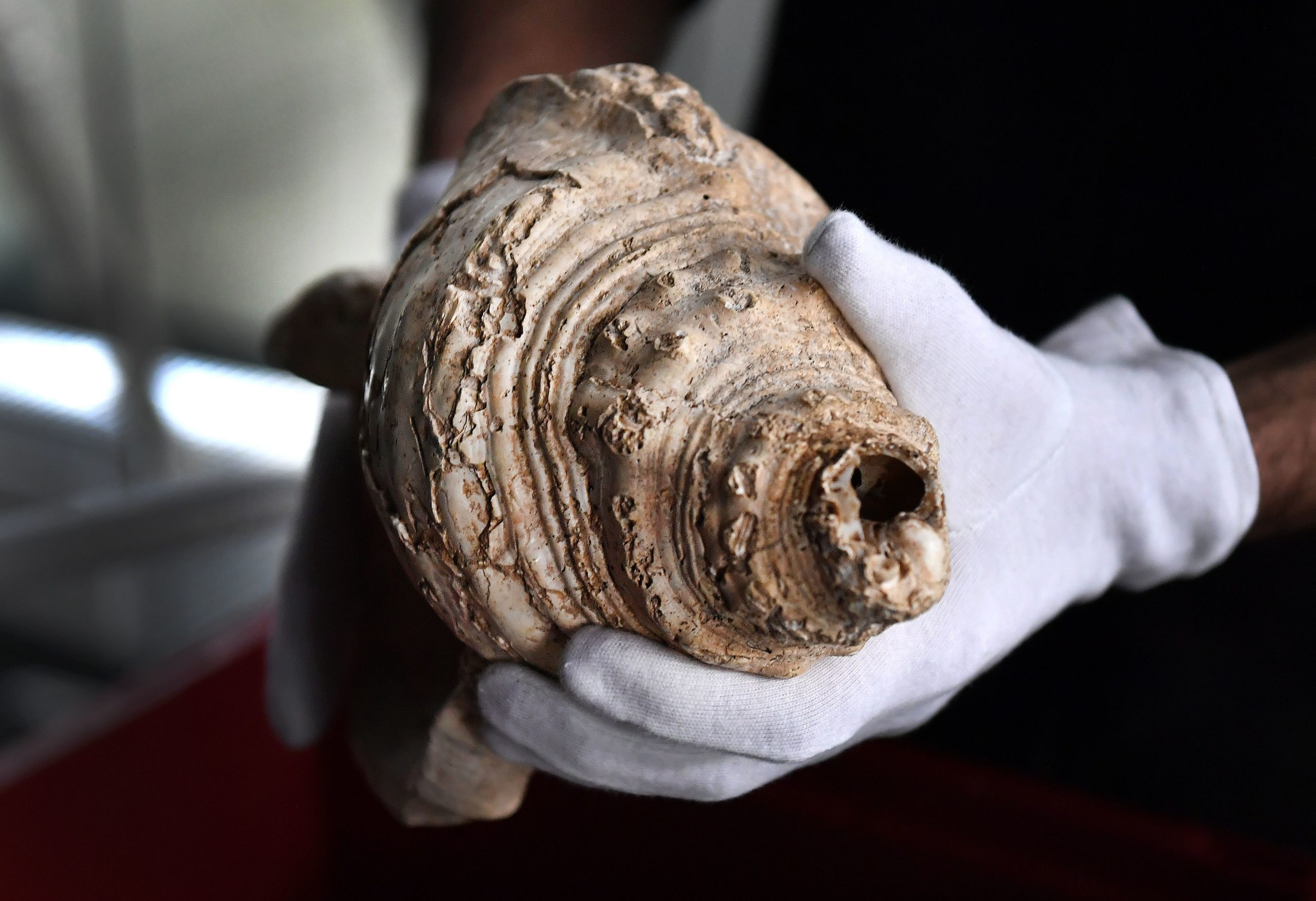 Guillaume Fleury, who works at the Museum of Natural History, shows a Charonia lampas trumpet shell, which was first found in 1931 in an archaeological dig at the mouth of the Marsoulas Cave, on February 10, 2021 at the museum in Toulouse. (Photo by GEORGES GOBET/AFP via Getty Images)

The archaeologists estimate that the shell is 18,000 years old. The shell found in the cave is the oldest known example of a conch shell used as a musical instrument, after a conch shell dating back 6,000 years was previously found in Syria, according to the AP. Conch shells were used as parts of musical and ceremonial traditions in Ancient Greece, Japan, India, and Peru.

It wasn’t until a recent inventory at the museum that researchers noticed the small holes in the shell. A tiny medical camera placed inside the shell found red pigment matching a decorative pattern found on the Marsoulas cave wall. Because Marsoulas is not near an ocean, experts believe prehistoric people must have moved around or used trading networks to obtain the shell, according to the AP. 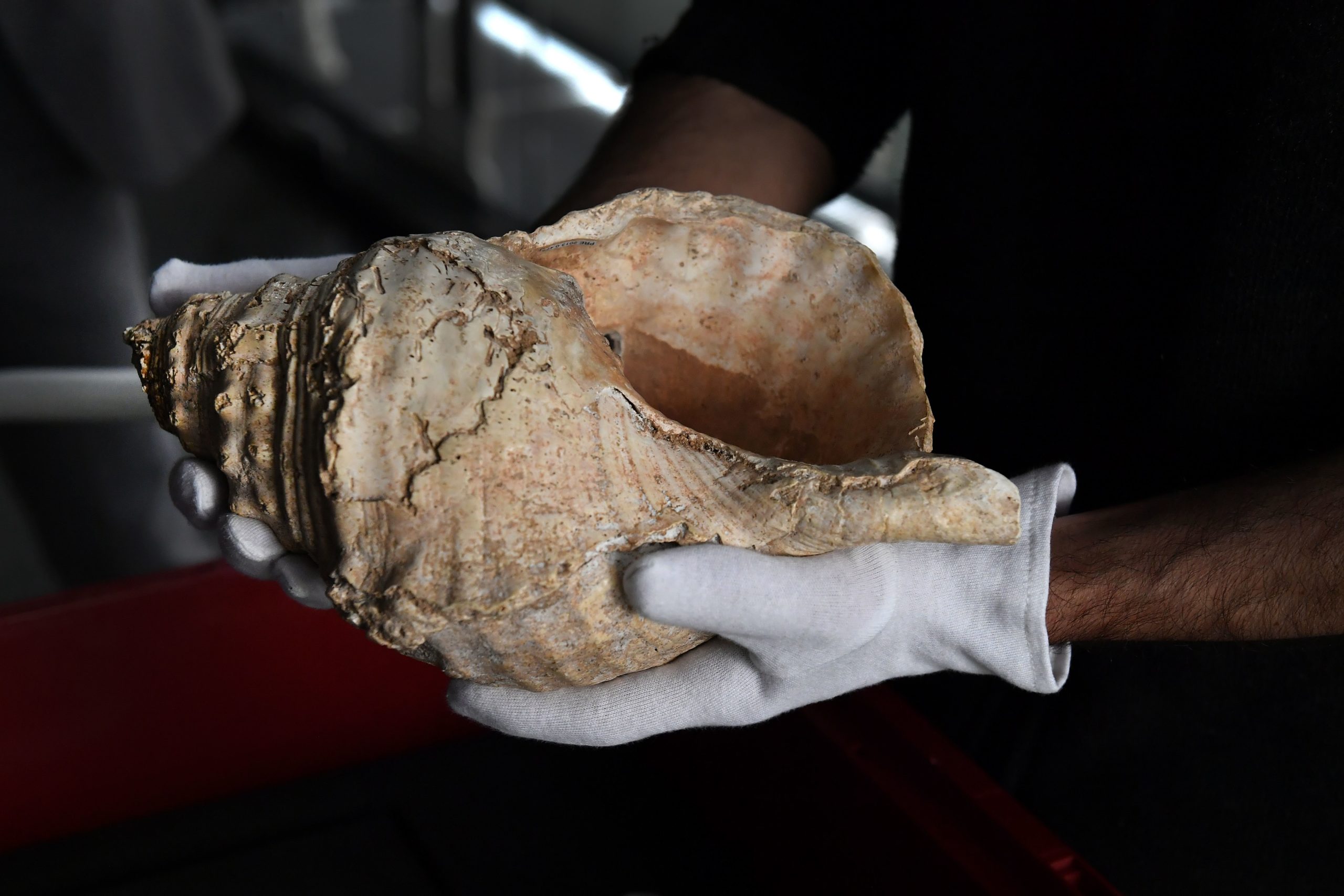 “What makes conch shells so interesting is that the spiral cavity formed by nature is perfectly adept at resonating musically,” Rasoul Morteza, a composer in Montreal who has studied conch shell acoustics, told the AP.

The archaeologists hope that after studying the shell’s range of notes, it will be possible to hear it played inside the cave where it was found.