2017 Video Of Ahmaud Arbery Encounter With Police Released, Shows One Officer Trying To Taze Him

A newly released video from November 2017 shows an encounter captured in body camera footage between Ahmaud Arbery and police who attempted to stun him after confronting Arbery while sitting in a car alone at a park, the Guardian reported.

The video shows a Glynn County police officer in Georgia patrolling an area he says is known for drug activity, and suspects Arbery of using marijuana, according to the video released by the Guardian.

The Guardian has released new footage of a 2017 encounter between Georgia police and Ahmaud Arbery in a Brunswick park known for drug activity. Arbery said he was rapping in the park. https://t.co/fuRI3GH3u5 pic.twitter.com/la8ZkYPiAe

Arbery tells the officer he didn’t have drugs and that he was rapping in his car during his day off from work at Blue Beacon Truck Wash. Arbery refused to let the officer search his car.

As the officer is checking Arbery’s ID with a dispatcher, Arbery begins questioning the officer about why he’s being stopped, and the incident escalates as Arbery approaches the officer, and the officer checks him for weapons. Arbery is unarmed. 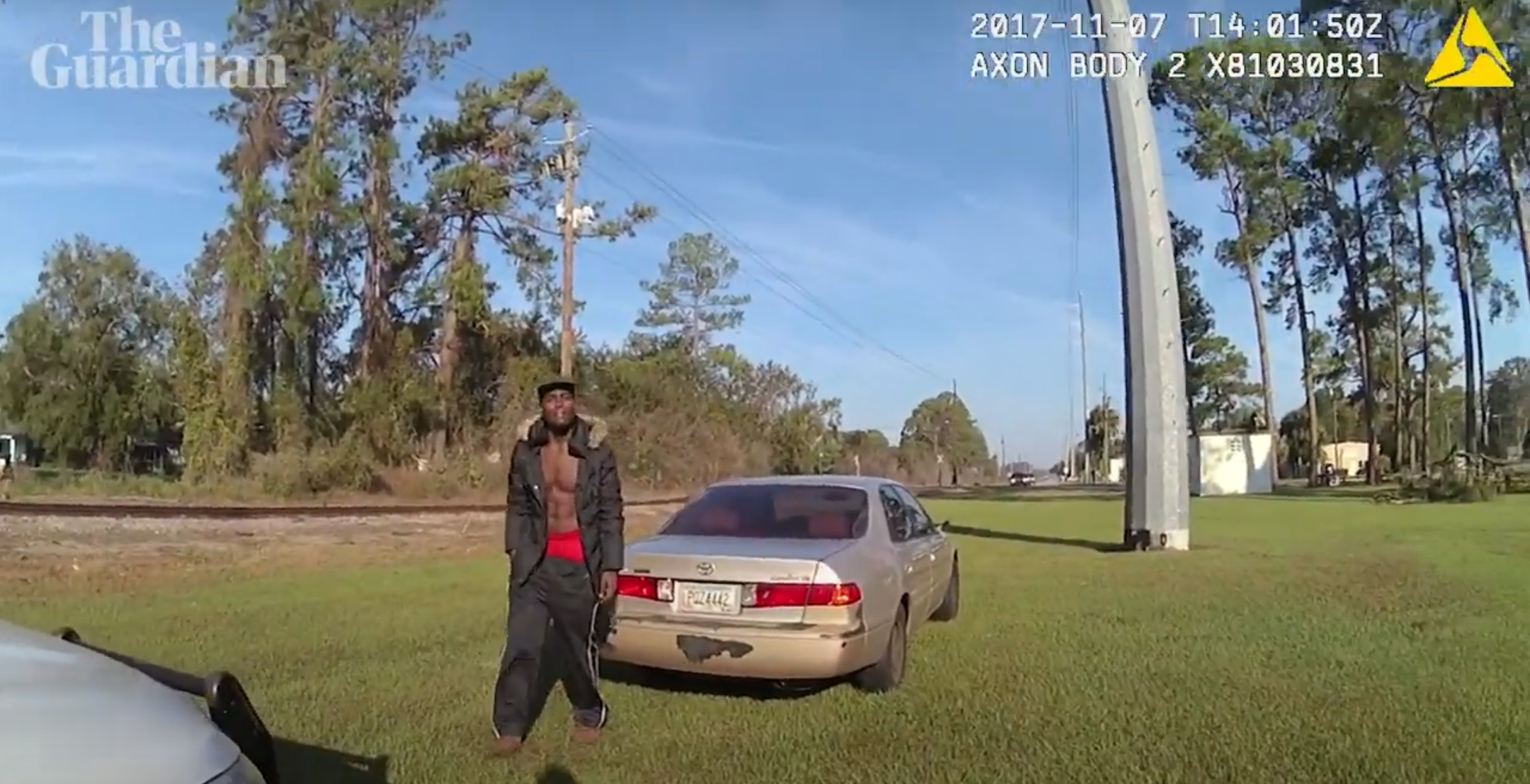 Ahmaud Arbery and his car during the 2017 incident with police. Screenshot/The Guardian

The officer, Michael Kanago, later wrote in his report that he felt threatened by Arbery and saw “veins were popping from [Arbery’s] chest, which made me feel that he was becoming enraged and may turn physically violent towards me,” according to the Guardian. Kanago requested help from a second officer.

After telling Arbery he’s checking for criminal activity, Arbery says “criminal activity? I’m in a fucking park. I work.” The second officer, David Haney, arrives and tells Arbery to remove his hands from his pockets, to which Arbery complies. Haney attempts to tase Arbery, but according to Kanago’s report, the taser malfunctions.

Arbery gets on the ground and follows the officer’s instructions.

Kanago tells Arbery that his intention was to check for gang and drug activity in the area and that when Arbery began getting “jumpy,” he became suspicious.

“I get one day off a week… I’m up early in the morning trying to chill,” Arbery says while he’s on the ground. “I’m just so aggravated because I work hard, six days a week.” 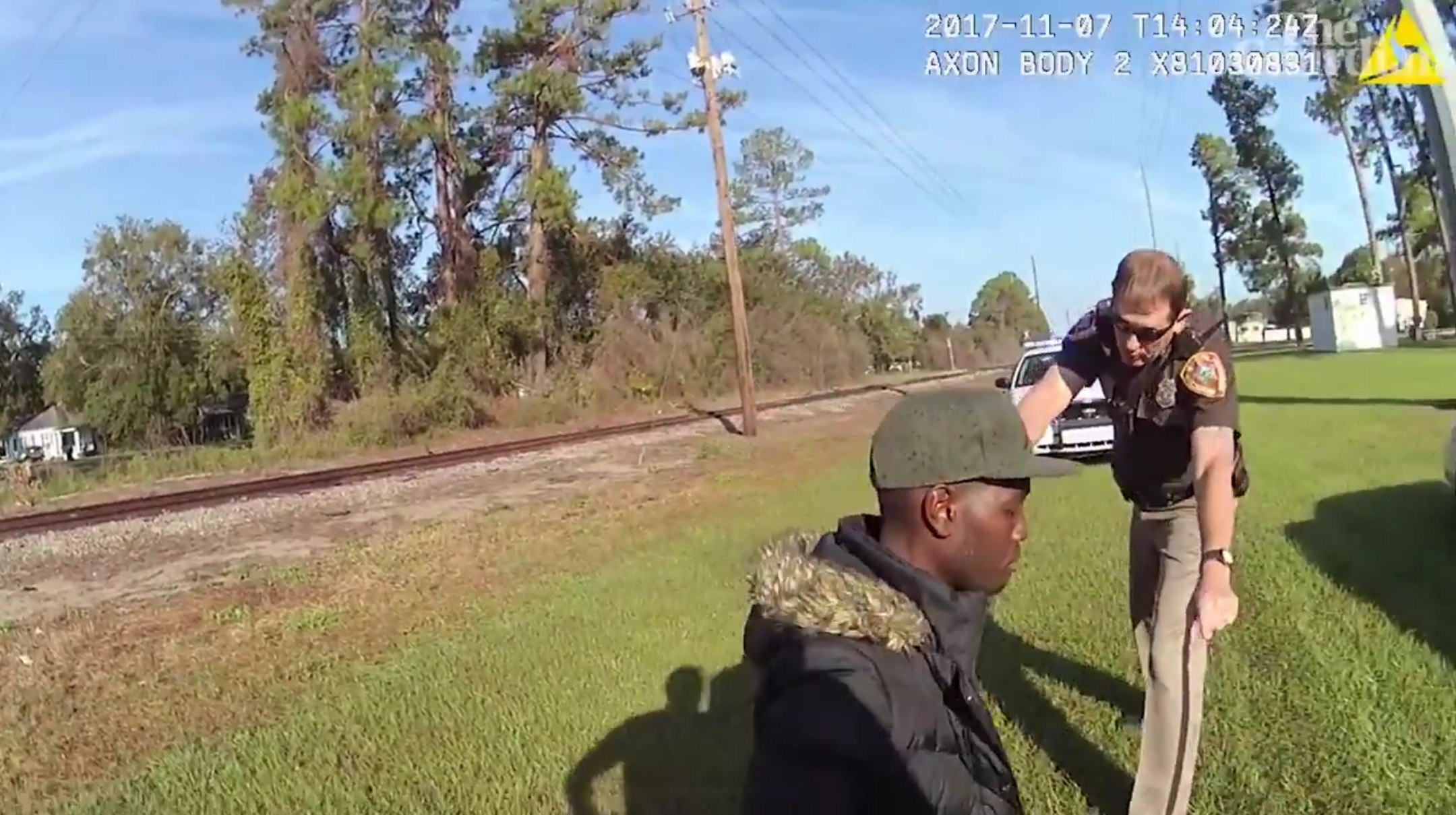 Police officer brandishing a taser while Ahmaud Arbery is on the ground. (Screenshot/The Guardian)

Kanago asks if Arbery would give him permission to check his vehicle after seeing a plastic material, and says it’s okay if it’s marijuana. Arbery continues to refuse, and the officer says he’s good to go, but that his license is suspended so he can’t drive the car.

“He’s sitting in his car wearing a big heavy coat,” one of the officers says. “Yeah, it’s hot as hell out here,” Kanago responds.

The officers deliberate over whether to investigate the car after smelling marijuana and vaguely seeing marijuana in the vehicle.

The attorneys representing the Arbery family told the Guardian there was “no justifiable reason” for threatening Arbery with a taser in the 2017 incident.

“This appears to be just a glimpse into the kind of scrutiny Ahmaud Arbery faced not only by this police department, but ultimately regular citizens like the McMichaels and their posse, pretending to be police officers.”

Arbery’s previous encounter with police was in 2013, when he was placed on probation for carrying a gun at a high school basketball game. He was later charged in 2018 with shoplifting and violating probation, according to the Atlanta Journal Constitution.