25,000 Troops Deployed To Crack Down On Deadly Riots In South Africa

The South African government deployed 25,000 troops Thursday to help handle violent rioting, which erupted in the city in the aftermath of former President Jacob Zuma’s imprisonment, the Associated Press reported.

Thousands of soldiers were already on the streets by Thursday morning aiding law enforcement, the government said, in what is one of the largest deployments of soldiers since the end of white minority rule in the country, according to the AP.

Protests over the former president’s imprisonment, the result of his refusal to testify at an inquiry investigating corruption allegations during his time in office, soon spiraled into looting sprees throughout the Gauteng and KwaZulu-Natal provinces, the AP reported. Several people have died from stampedes during the looting of stores.

At least 117 people have died from the rioting, while more than 2,200 have been arrested for theft and vandalism, Khumbudzo Ntshavheni, acting minister in the presidency, said Thursday, the AP reported.

“These are not demonstrations. This is economic sabotage and we are investigating with a view to apprehending the instigators,” Ntshavheni said at a briefing Thursday, the AP reported.

Volunteer groups have worked to pick up shattered glass and debris from the various shops that were hit by the looting in Johannesburg’s Soweto, Alexandra and Vosloorus areas, the AP reported. 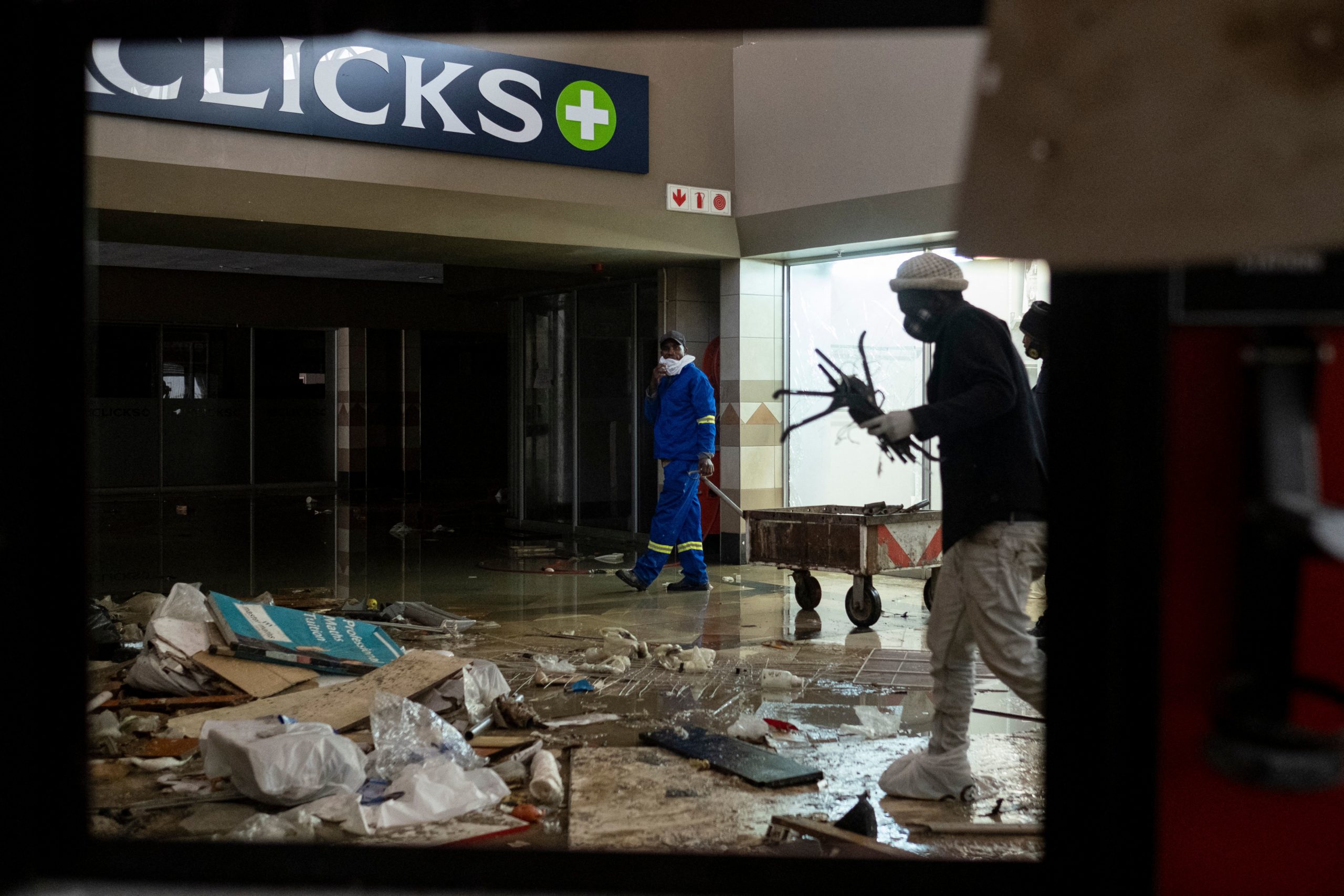 Soweto community members salvage usable objects from the floor in the aftermath of continuous looting and destruction at the Jabulani mall in Soweto on July 15, 2021. (Photo by EMMANUEL CROSET/AFP via Getty Images)

“I spoke to some of the guys who are unemployed in my area to come and help. The mayor supported us with transport to get here. We came here with two buses,” George Moswetsa, a resident of Vosloorus in eastern Johannesburg who was aiding the clean-up efforts of a mall that had been ransacked, told the AP.

Authorities said patrols were able to bring stability to the Gauteng province, but attacks on shops continued in KwaZulu-Natal on Thursday, with factories and warehouses subjected to arson attacks, the AP reported. (RELATED: Herd Of Wild Elephants Trample Suspected Poacher To Death)

More than 10,000 rounds of ammunition were discovered by police in Durban on Wednesday night, which Minister of Police Bheki Cele said belonged to individuals attempting to spark more violence in the province. William Gumede, a South African analyst, told the AP the continued chaos in the region seems to be part of a coordinated plan.

“The arson, the looting and then the burning of malls, the burning of warehouses, I mean, that indicates a really strategic destruction of the economy of KwaZulu-Natal,” Gumede said. “There’s a whole lot of organization behind that.”

The best path for South Africa to take is to prosecute the perpetrators, Gumede said, as it is essential to “restore the rule of law” and “prevent impunity.”