A power struggle has broken out in Armenia after the military called for Prime Minister Nikol Pashinyan to step down in the latest challenge to his leadership since he signed a ceasefire that paused fighting in Nagorno-Karabakh. 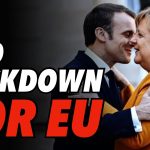