Because of “ISIS” and the Turkish attacks, Moscow warns of escalating tension east of the Syrian Euphrates 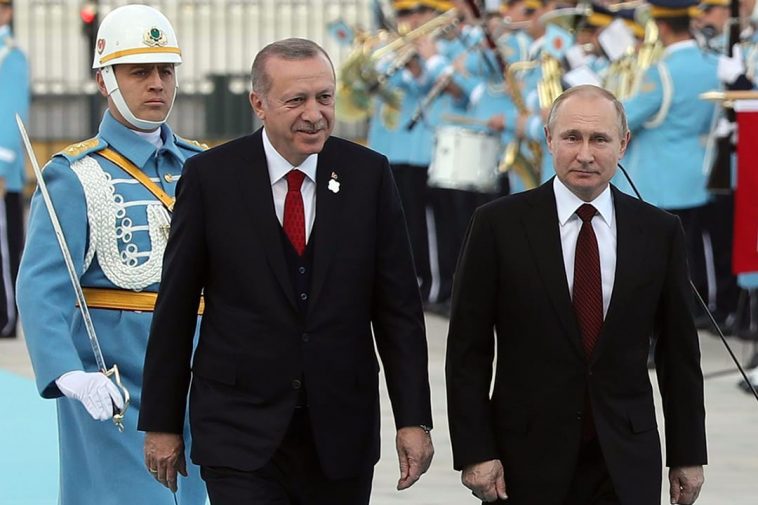 The President of Turkey Recep Tayyip Erdogan and his Russian counterpart Russia’s Vladimir Putin (R) review the honour guard at the Presidential Complex in Ankara on April 3, 2018.
President Vladimir Putin arrived for a visit to Russia’s increasingly close partner Turkey aimed at launching the construction of a nuclear power plant and coordinating policy on the war in Syria. / AFP PHOTO / ADEM ALTAN

The Russian Foreign Ministry warned of the escalation of tension in the eastern Euphrates region in Syria, in light of the resumption of the activities of the militants of the “ISIS” organization, and the continuing clashes between the “SDF” on the one hand and the armed factions supported by Turkey on the other hand, amid the continuous attacks committed by the latter on the region.

The Russian Deputy Foreign Minister, Sergey Vershinin, said, “The field situation in Syria is stable, but it is still complicated with the return of tensions in the areas outside the control of the Syrian state, which are Idlib, eastern Euphrates and Al-Tanf.”

“Vershinin” indicated that the areas east of the Euphrates are witnessing an escalation of tension in light of the resurgence of “ISIS” activity, and the continuing clashes between the “SDF” and tribal alliances, as well as between them and the factions loyal to Turkey along the borders of the “Operation Peace Spring” and in the vicinity of Medina. Ain Issa. ”

The Russian Air Force participates in the ongoing battles between the Syrian army and the militants of the terrorist organization “ISIS” in the various axes of the Badia, especially in the Aleppo-Hama-Raqqa triangle, noting that the archaeological and peaceful areas in Hama countryside have also recently witnessed an increase in the number of attacks carried out by ISIS terrorists.

Yesterday, the countryside of Hama witnessed the targeting of ISIS militants, passenger buses, and fuel tanks in the “Wadi Al-Atheeb” area on the Athria-Salamiyah road, which led to 9 civilian casualties and 4 others injured.