Blaming Each Other for Backing Terrorism

The two sides of the Gulf Cooperation Council (GCC)’s Qatar rift are far from reconciling as both accuse the other of supporting terrorism, reports Giorgio Cafiero.

The Gulf Crisis between Qatar and its neighbors (Saudi Arabia, Bahrain and the UAE) is no closer to being settled than when it erupted in May 2017. The differences — including displeasure by the Saudi-led faction with Qatar’s relations with Iran, its pro-Muslim Brotherhood stance and its alleged support of terrorism — have only heated after a controversial new documentary aired by Qatar government-ownedAl Jazeera Arabic last month that accuses Bahrain of coordinating with terrorists.
The 52-minute film, “Playing with Fire,” makes extremely serious accusations about the Bahraini royal family’s alleged ties with Salafist-jihadist terrorists. It claims to expose recordings and communications that prove that the Bahraini kingdom recruited Al-Qaeda terrorists to establish a cell to carry out targeted assassinations of key figures within the country’s Shi’a opposition. According to “Playing with Fire,” King Hamad Bin Isa al-Khalifa authorized the operation, even intervening with Riyadh to release Mohammed Saleh, an Al-Qaeda commander, from a Saudi prison. 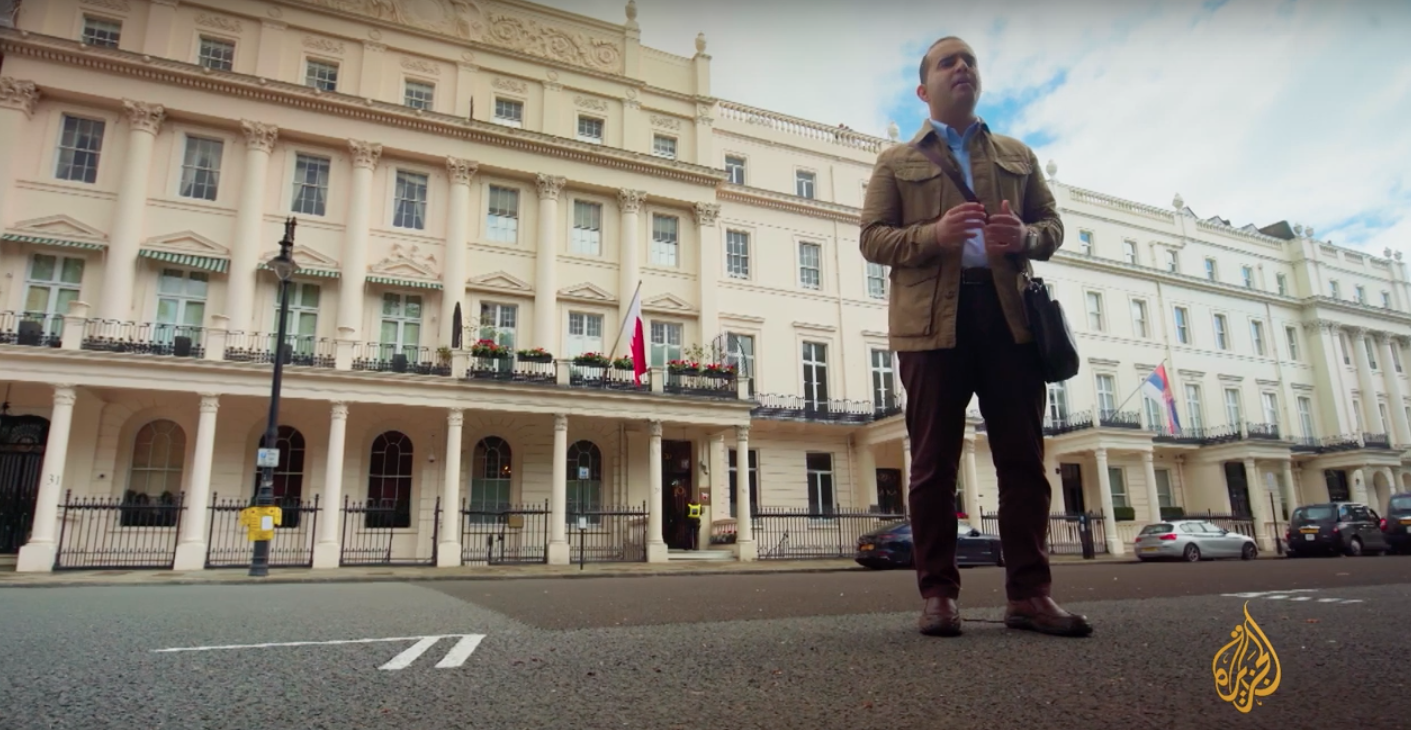 Still from “Playing with Fire.”

The documentary alleges that Bahraini intelligence officials and Al-Qaeda coordinated acts of terrorism in the southeastern Iranian province of Sistan Baluchistan. According to Al Jazeera’s conclusions, in 2006, Bahraini intelligence officials recruited Hosham Baluchi, the ex-leader of Ansar al-Forghan, whom the Iranians later killed in 2015, for such terror operations in Iran’s restive areas near Pakistan.

Predictably, the government of Bahrain had harsh words for Qatar and its state-owned pan-Arab network. Bahraini Foreign Minister Khaled bin Ahmed said  the documentary was merely a “new episode in a series of conspiracies from a rogue state against the Kingdom of Bahrain, and against the stability of the entire region.” Packed with “lies and fallacies against the state Bahrain,” the documentary’s allegations have no basis in fact, asserted Bahrain’s chief diplomat. He went further, doubling down on the narratives that drove Manama and other Arab capitals to begin blockading Qatar in 2017, stating that Doha “has become the biggest threat to the Gulf Cooperation Council.”

Mohamed Mubarak, a Bahraini journalist based in the United Kingdom, spoke to RT and fired back against Al Jazeera Arabic’s documentary. He claimed that in 2006 Bahraini authorities instead captured a group of extremists and that the video footage of Al-Qaeda commander Saleh used in the documentary was fabricated in order to “blackmail” Bahrain’s rulers.  Mubarak claimed that “Bahrain is a spearhead in combating terrorism [which has joined] the international coalition in fighting ISIS, either in Syria or Iraq.” For Qatar to level such accusations against Bahrain was “paradoxical and ironic” given Al Jazeera’s history of providing a platform for Al-Qaeda members and sympathizers, Mubarak said.

Al Qaeda in the Arabian Peninsula (AQAP) also delivered an official response to the documentary. The terrorist group released a statement denying such links with the Bahraini state. The Al-Qaeda franchise asserted that such accusations of a secret agreement between the Al Khalifas and Al-Qaeda operatives illustrated how GCC member-states remain “keen to persuade their master Trump of who is the most loyal of his devoted workers in the war against the mujahideen.”

There have been accusations for years about the Arabian Peninsula’s monarchies making backdoor deals with Al-Qaeda and other Salafist-jihadist factions, often within the framework of utilizing these Sunni extremists to push back against Iranian/Shi’a influence in the region.

In the Yemeni civil war, numerous media sources, including the Associated Press, have alleged coordination between the Saudi/Emirati-led coalition and AQAP. This reporting from Yemen claimed that Riyadh and Abu Dhabi cut “secret deals with al-Qaida fighters, paying some to leave key cities and towns and letting others retreat with weapons, equipment and wads of looted cash … hundreds more were recruited to join the coalition itself.”

There are several pieces of evidence showing that both sides in the GCC dispute were seen by Western intelligence to be supporting terrorist groups in the earlier stages of the Syrian war. A leaked memo, published in October 2016 by WikiLeaks, which was sent as an attachment in an email from Hillary Clinton, said: “We need to use our diplomatic and more traditional intelligence assets to bring pressure on the governments of Qatar and Saudi Arabia, which are providing clandestine financial and logistic support to Isis and other radical groups in the region.”

A declassified document from the U.S. Defense Intelligence Agency predicted in August  2012 the rise of the Islamic State and said that the U.S. and European and Gulf Arab allies were supporting the establishment of a salafist principality in eastern Syria, which the document predicted, two years in advance, would give rise to an “Islamic State.” The document said:

“Western countries, the Gulf states and Turkey are supporting these efforts” by Syrian “opposition forces” to “control the eastern areas (Hasaka and Der Zor), adjacent to Western Iraqi provinces (Mosul and Anbar)  … there is the possibility of establishing a declared or undeclared Salafist Principality in eastern Syria (Hasaka and Der Zor), and this is exactly what the supporting powers to the opposition want, in order to isolate the Syrian regime, which is considered the strategic depth of the Shia expansion (Iraq and Iran).”

Then U.S. Vice President Joe Biden told a Harvard University audience in 2015 that, “Our biggest problem is our allies,” naming Saudi Arabia, Turkey and the UAE. “What did they do? They poured hundreds of millions of dollars and tens of thousands of tons of weapons into anyone who would fight against [Syrian President Bashar al-] Assad, except that the people who were being supplied were [Jabhat] al-Nusra and Al-Qaida and the extremist elements of jihadis coming from other parts of the world.” Biden later went on an apology tour of the region, after complaints from the UAE, and he tried to withdraw his remarks.

Ironically, a main justification for the 26-month blockade of Qatar, imposed by half of the Saudi-led GCC’s member-states and Egypt, has been Doha’s alleged support for Al-Qaeda and other groups, from Islamic State to Lebanese Hezbollah.

Traditional dhows in front of the West Bay skyline as seen from the Corniche, in Doha, Qatar. (StellarD, CC BY-SA 4.0, Wikimedia Commons)

In the past, before the ongoing GCC crisis, all Arab Gulf monarchies essentially joined a collective effort to fortress each other from such accusations made by Western politicians, think tanks and media.

Notwithstanding major differences between each GCC member, these six states largely operated as one family in the sense that they defended each other in discourse surrounding such alleged ties between royal families of Arabian sheikdoms and terrorist organizations such as Al-Qaeda.

In the aftermath of the Sept. 11 terrorist attacks, in which all but one of the 19 hijackers came from countries that are currently blockading Qatar (15 Saudis, two Emiratis, and one Egyptian), nearly all in the GCC had to bend over backwards to demonstrate to Washington and other Western governments that Gulf regimes were fully on board with America’s “war on terror.”

In the current era, however, there is mudslinging and finger pointing within the GCC as the war of narratives rages on. Which Gulf states maintain tacit relations with nefarious terror outfits that target the Arab monarchies’ chief ally —the U.S. — and which of these GCC members are truly committed to working with the West in this struggle against extremism?

Until or unless the Gulf dispute is resolved, these questions and their answers will continue to be framed by the blockading states in a way to portray Qatar as the pariah state, while Doha will use its media outlets such as Al Jazeera Arabic to counter such narratives and turn the accusations around against its GCC accusers.

If you enjoyed this original article, please consider making a donation to Consortium News so we can bring you more stories like this one.