Let us demonstrate some insanity: What would you say if I told you that the CDC is uncertain that masks provide any protection at all from the coronavirus?

Does that sound crazy to you? We finally see President Trump wearing a mask here and there, and his opponents Joe Biden and Kamala Harris look like bad renditions of Old West bandits as they campaign for President (not Vice President, but President and handler).

Well, watch this presentation by Tucker Carlson. You will also see that the coronavirus is being connected to climate change of all things and that there is indeed an enormous power play making use of this very mild pandemic disease. Tucker notes the CDC doubt at timestamp 7:00. See for yourself.

In recent months as the COVID-19 / coronavirus pandemic event became the story of 2020, a great number of rather conspiratorial-sounding posts and prophecies have been circulating across social media. Particularly in the Eastern Orthodox world, monastic after monastic, and with a fair sprinkling of comments attributed to modern saints of the twentieth century, have been quoted saying that, to paraphrase, the time is coming when the powerful of this world, the Antichrist, will seize control, causing everybody to be marked. Without that mark, no one will be able to eat or conduct commerce. The mark is associated with the number 666, the Number of the Beast as foretold in the Apocalypse (Revelation of St John), the last book of the Bible.

It should be understood that in the Orthodox Christian world, we are also repeatedly told not to conclusively try to determine if this or that moment is the fulfillment of any of the events foretold in that book. Yet the saints of the modern times, foreseeing the developments we seem to have come to now, have been quoted hither and yon. (I cannot speak to what the believers in the Roman Catholic Church are being told, if anything, or the Protestants, and that is why I am picking out the Eastern Orthodox tradition, since I belong to it and know it the best. Hopefully a writer from either of those traditions will supplement this piece with their own observations.)

I am skeptical of any conspiracy theory by definition. Perhaps this is wise and perhaps it is not, but the prevailing view I try to hold is that the world is a much more boring place than to be a mass of some number of conspiracies like the Illuminati at work, or the Bilderbergers, of the secret Seven, or Five, or whatever it is, Zionists and so on. It seems absurd to me for anyone to actually want to try to control the world, because in the words of the Psalmist, King David “when [the prince’s] breath departs he returns to his earth; on that very day all his plans perish. (Psalm 145:4 LXX)

All that being said, it looks like this conspiracy is quite real. In the United States, the American people have been cowed by a largely ephemeral disease into self-isolation and restrictions, financially with job losses, socially with ever-changing restrictions on gathering together (except for destructive and deadly rioting), inability to worship God according to one’s tradition (churches are closed or with sharply restricted attendance – if they follow the law), travel and so on.

These restrictions and controls, all justified by “irrefutable science” (even though what that irrefutable science actually is changes almost by the hour), and the inclination of our people to believe what they are told rather than think for themselves, is pushing the nation to a truly explosive point. Remember years ago when that Russian geopolitical professor predicted the US would split into six nations? It seemed absurd then, but what about now?

Tucker Carlson examines the shifting narrative and its goals for people. That goal appears to be nothing less than control of the masses by a fickle power. That power is not God, it is science, but it is not even good science. It is quackery. The World Health Organization got this virus wrong over and over, perhaps deliberately but they presume to be the authority by which the rest of the world will receive its marching orders.

What is worse, it appears to be very well organized by those with a lot of power. Here is an example:

With the facebook screen of the photo removed, we see this: 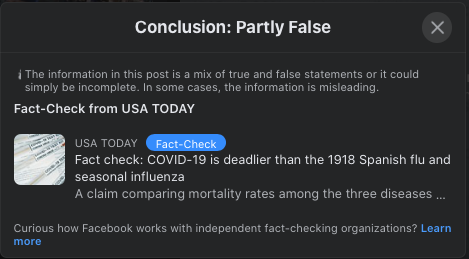