Rutte presented Trump with an American flag that was on the first U.S. ship to land in Normandy as part of the D-Day invasion that occurred on June 6, 1944 during World War II. The bullet-riddled flag was purchased at an auction three years ago by Dutch collector Bert Kreuk, who later felt compelled to return the flag to the U.S. (RELATED: Here Are The Best Photos From The D-Day Memorial In Normandy) 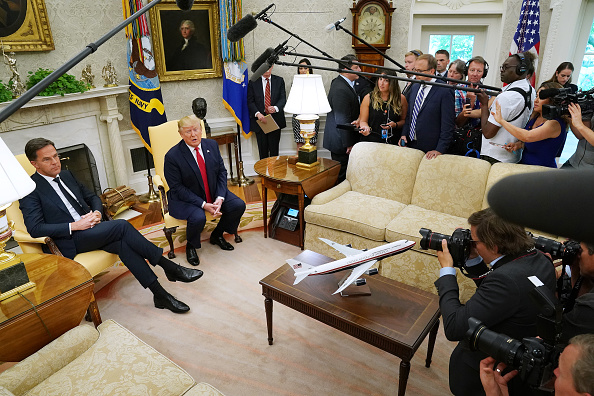 Before coming into Kreuk’s possession, the flag had been owned by Lt. Howard Vander Beek, who had commanded the ship during the invasion. Beek held onto the flag until he passed away in 2015.

Earlier this year, the U.S. and other allied nations celebrated the 75th anniversary of the successful D-Day invasion, returning to Normandy, France for the commemoration. (RELATED: 7 Minutes To Live: The Extraordinary Story Of D-Day Veteran Andy Andrews)

“Before the war, many had never ventured beyond their own community,” the president said at the time. “Now, they had come to offer their lives halfway across the world.”