Another company has come out with Betsy Ross flag-era sneakers, in a direct counter to Nike who recalled their flag-themed kicks when former NFL quarterback Colin Kaepernick said the design was reminiscent of the slave era. While other companies are likely concerned with making a profit off of a massive political statement, there’s a small time company that is 100 percent American owned and operated with a very different mission at hand. PrintedKicks, is a proudly Pro-Trump,Pro-Police, and Pro Military company, so it should come as no shock that they felt pretty opinionated about the Betsy Ross sneakers being removed so close to the 4th of July.

I spoke with PrintedKicks’ CEO and founder at length about the issue since PrintedKicks already sells really cool Trump sneakers (see here) and I wanted to see if they had any comments or plans revolving around the Betsy Ross controversy. He revealed that sneakers were in the works, but unlike other companies mass producing shoes in China for huge profits off of hard-working conservatives, I have been promised that 100 percent (not a single penny less) of the profit that PrintedKicks makes off the sale of these stylish Betsy Ross sneakers, will go to support a charity that helps veterans suffering from PTSD. In summarizing his remarks, the CEO stated that while he realizes there is demand for Betsy Ross Flag-themed Sneakers and that he is proud his company prints and embroiders its products in the USA, he wanted his company to give back to the country that has given us all so much. 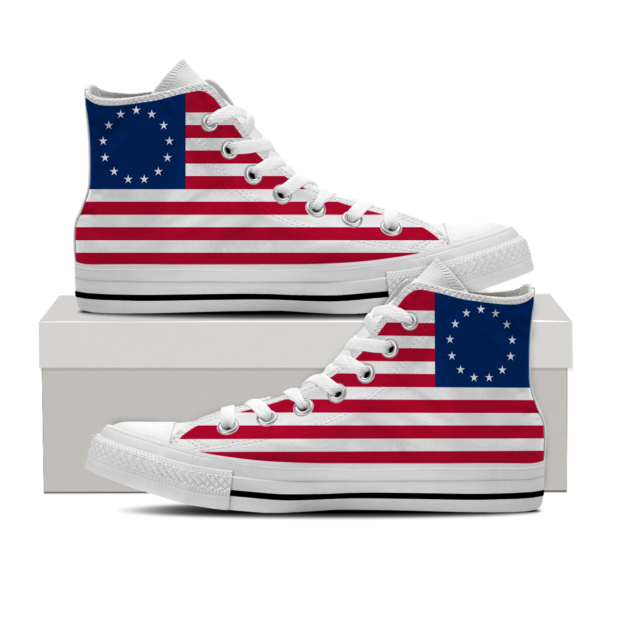 These sneakers look stunning and all profit will go towards a charity supporting veterans suffering from PTSD. Also save 20 percent off the entire store when you use the promo code ‘Merica’ at checkout!

Personally, I think these sneakers look like are better quality ( I owe the Trump sneakers) than the Nike knockoffs that everybody else is pushing out, which is unsurprising given the better quality of American craftsmanship in general. I have already ordered three pairs for myself and friends, and personally I can’t think of a better way to stick it to the anti-american complainers in our lives than to buy sneakers  with the original Betsy Ross flag design (that everybody is saying is offensive), from an All-American company (while most companies operate in China), on sale for 4th of July, and with all proceeds supporting medical care for the veterans who proudly served our country.

Truly what a great day to be an American. Happy 4th of July everyone!

If you love this company’s commitment to America, be sure to check out other products they have on sale as right now you can save 20 percent off on most items you order when you use the promo code ‘Merica’ at checkout

Have a suggestion for a cool product or great deal that you think Daily Caller readers need to know about? Email the Daily Dealer at dealer@dailycaller.com.

The Daily Caller is devoted to showing you things that you’ll like or find interesting. We do have partnerships with affiliates, so The Daily Caller may get a small share of the revenue from any purchase.