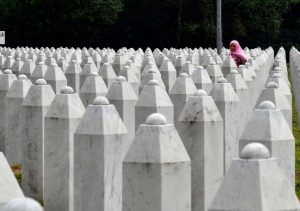 claimed that the number of Bosniaks killed was considerably smaller.

After many years of search, a list of slightly more than 2,000 bodies of the Bosniaks found in and around of Srebrenica was delivered to the International Court in Hague. This number also includes the victims made in the three years of intensive fighting. Also, a list of about 5,000 Bosniaks who were reported missing was submitted to the Court. The Court in Hague accused the Serb leaders in Bosnia and Herzegovina, Radovan Karadžić and Ratko Mladić, to have ordered the killings of captured Bosniaks. If that was true, then the Serbian Republic is a criminal creation and, as such, does not deserve to exist. On the other hand, this order would be crazy and counterproductive because the whole world watched them. Radovan Karadžić and Ratko Mladić are still responsible for this act because they led the army of which they did not have enough control.

The Norwegian film directors Ola Flyum and David Habdich investigated the massacre in Srebrenica and created a documentary film “A Town Betrayed.” Among other things, the movie at 28:10 presents the statement of the former Srebrenica police chief Hakija Meholjić, who together with other Bosnian delegates, attended the meeting with President of Bosnia and Herzegovina Alija Izetbegović in Sarajevo, before the massacre in Srebrenica happened. In the movie, Hakija Meholjić reports what Alija Izetbegović said at this meeting. He said: “President Clinton proposed, if the Četniks (Serbs) enter Srebrenica and slaughter 5,000 Muslims, there will be military intervention by NATO forces on the Serb positions throughout Bosnia and Herzegovina. What do you think about that?”

The offer assumed the Bosnian military forces withdrew from Srebrenica, leaving Muslims to be killed by the Serb forces. This is something that happened even though different versions of it exist. But how did President Clinton know in advance that the Serb forces would do such a crime? The Serbs have never committed anything similar on such a scale in their whole history. President Clinton might have known that the massacre would happen only if his people had arranged it. Most likely, America had its agents in the Serb forces who made the killings occurred while the Serbian Army General Ratko Mladić was in Belgrade.