The coronavirus pandemic has thrown into stark relief many American companies’ reliance on China, where critical supply chains were outsourced due to low cost and low regulation.

About 50% of China exports to the U.S. are exports by wholly foreign owned companies or joint ventures with Americans, according to Forbes, underscoring China’s role as a manufacturer of cheap American consumer goods.

While 40% of American companies began relocating some of their supply chains out of China in 2019 as a response to the trade war, some companies remain reliant on China for their business. Of U.S. companies with operations in China, 87% expected the outbreak to negatively affect revenue, according to a American Chamber of Commerce in Shanghai survey.

Here is a list of American companies that depend on China for much of their business.

Nike: Nike closed about half its stores in China in response to the coronavirus, and remaining stores report lower-than-expected retail traffic, according to Market Watch. Nike produces about 25% of its global footwear in China, according to the Wall Street Journal. Total sales in Greater China, excluding currency impact, were at $1.85 billion according to reported quarterly earnings in December 2019, which grew 23% according to CNBC.

Nike said it would review its supply chain in China following reports in 2020 that Uyghur Muslims were detained and sent to factories producing athletic gear. 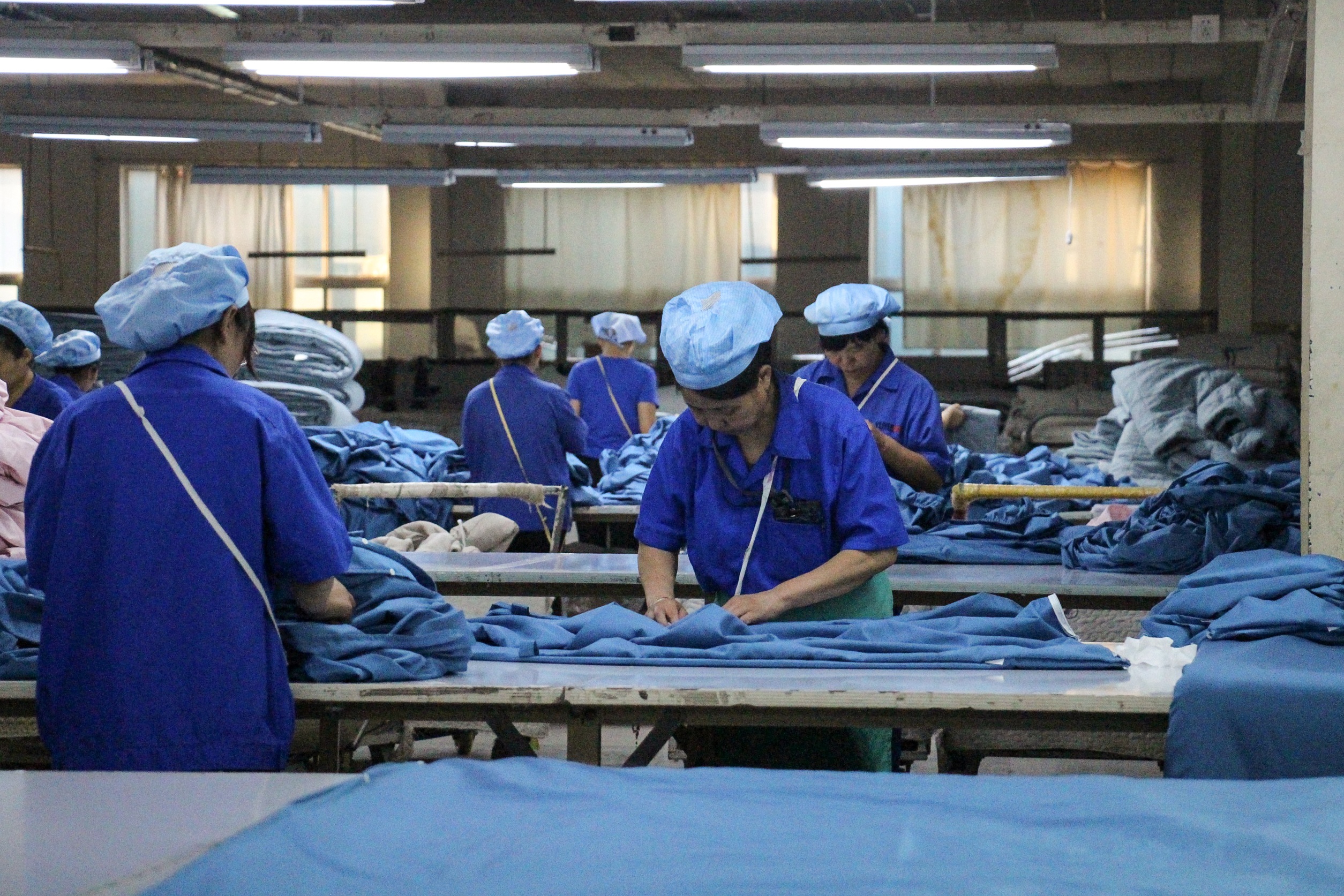 This photo taken on August 29, 2019 shows workers producing cloth that will be exported to the US at a textile factory in Binzhou, China’s eastern Shandong province. (STR/AFP via Getty Images)

Starbucks: Starbucks was among the top American companies with significant business in China, and aims to have 6,000 stores in the country by 2022. In March, the company announced it would invest $130 million in China to open a state-of-the-art roasting facility in 2022 as part of its new Coffee Innovation Park, according to Manufacturing Global. Starbucks also announced it would buy the remaining 50% share of its East China business from its joint venture partners for nearly $1.3 billion, its biggest ever acquisition, Reuters reported in 2017.

Tesla: Tesla opened its newest auto production factory in China last year and was working to increase production of some parts at its Shanghai factory, according to a Reuters report from March 2020 based on a Chinese government document. Tesla was planning to add production capacity for parts such as battery packs, electric motors, and motor controllers. At the end of 2019, Tesla said it imported about 70% for parts used in its China plant, but wanted to keep its full China supply chain domestic by the end of 2020. 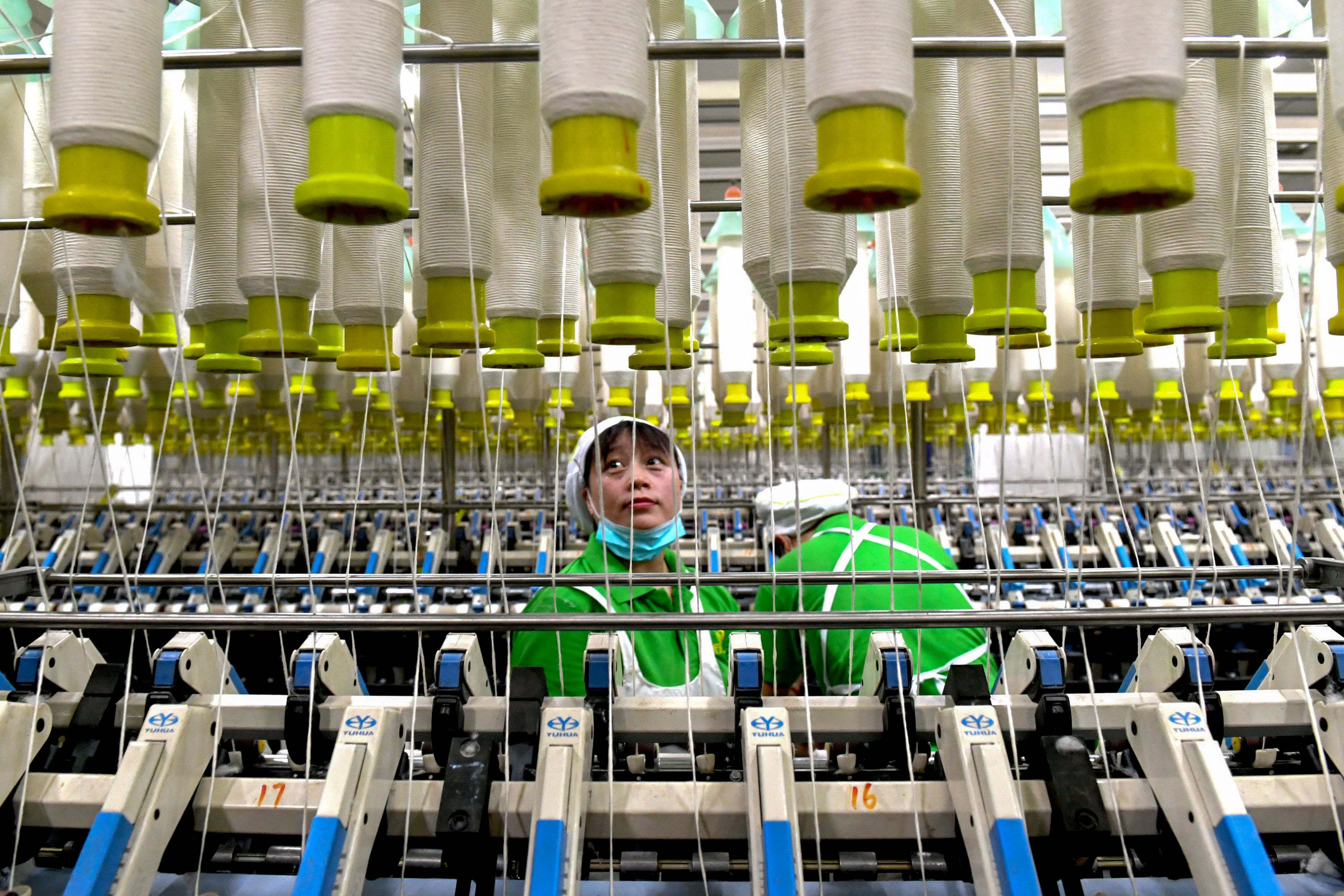 An employee works in a textile factory in Xiayi county in Shangqiu in China’s central Henan province. (STR/AFP via Getty Images)

General Motors: GM is among the American automotive companies to be the most severely impacted by the coronavirus pandemic, USA Today reported, due to the way its supply chain is constructed. GM sells more cars in China than it does in the U.S., and the company has a joint venture assembly plant with SAIC Motor Corp. in Wuhan, where nearly 6,000 people are employed. The Wuhan plant is only one of GM and its joint ventures’ 15 assembly plants in China, according to USA Today.

Apple: China is where most of Apple’s supply chain is located, and the company warned retail employees in early March to brace for a shortage of replacement iPhones due to supply constraints caused by the pandemic, according to Business Insider. Following trade-war tariffs on Chinese exports, Apple was reportedly talking with suppliers about a “fundamental restructuring” of its supply chain in 2019, asking suppliers to price out the cost of moving 15-30% of production out of China, according to Nikkei Asian Review. About a fifth of Apple’s total sales are recorded in China, while on the manufacturing side, its supply chain accounts for three million jobs in the country, according to the Wall Street Journal.

Wal-Mart: Wal-Mart sources a great majority of its merchandise from China, and announced plans to invest $1.2 billion in distribution centers in China over the next two decades, according to CNN Business in 2019. “Walmart continues to increase investment in supply-chain logistics in order to … provide our Chinese customers with great fresh products, and improve our service,” Ryan McDaniel, senior vice president of supply chain for Walmart China, said in the statement to CNN. The company already invested $102 million in building a distribution center for perishables in China, and partnered with Chinese tech firm JD.com in 2016. It also invested more than $300 million in a Chinese delivery firm Dada-JD Daojia, CNN Business reported.

As of January 2019, Wal-Mart had 443 stores in China, including its subsidiary Sam’s Club. The company brought in $10.7 billion through its China operations in 2018. 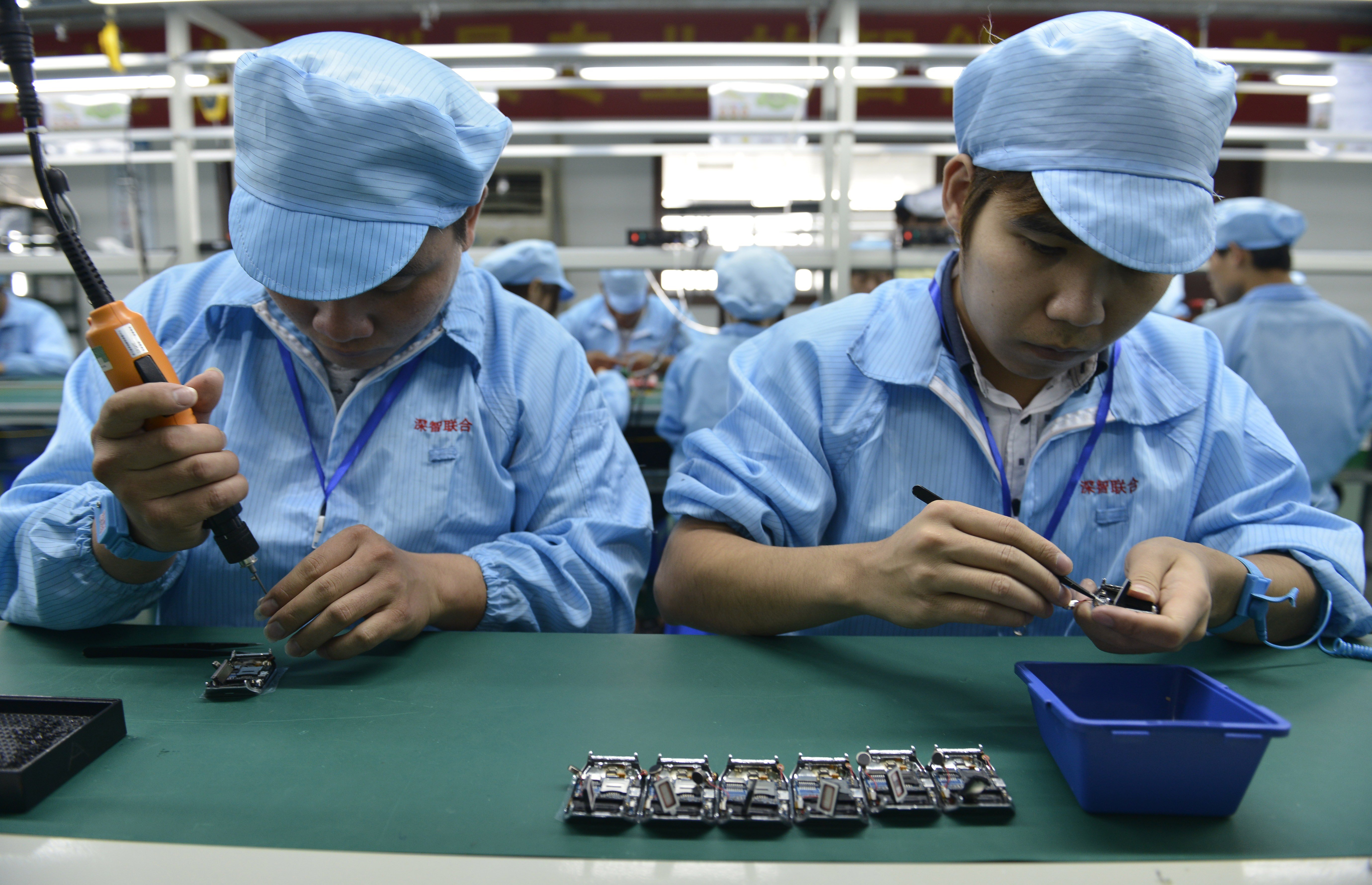 This picture taken on April 22, 2015 shows Chinese workers assembling a cheaper local alternative to the Apple Watch in a factory producing thousands every day in Shenzhen, in southern China’s Guangdong province. (STR/AFP via Getty Images)

Procter & Gamble: Procter & Gamble accesses 387 suppliers in China that ship to the company globally more than 9,000 different materials, “impacting approximately 17,600 different finished product items,” Jon Moeller, the groups CFO and COO said at an industry conference in 2020 according to Forbes. The company makes everything from toilet paper to detergent, and depends on China for the materials necessary to make many of their products. The company makes more than 90% of what it sells in the U.S., but relies on China for the components that no one in the U.S. makes, according to CNN.

P&G was building a $500 million West Virginia plant that would support 1,800 jobs, however some of the plant’s infrastructure — pipes, tanks, and containers — are produced in China. (RELATED: US Must Take Back Pharma Production From China)