Hong Kong police cracked down on protesters Sunday when they fired a warning gunshot and used new water cannon trucks for the first time to disperse crowds.

Police were pushing back against protesters who were attacking officers with sticks and rods in the Tsuen Wan district — 36 of whom police arrested, including a 12-year-old, according to The Associated Press.

One officer fired his gun into the air as a group of protesters charged toward him and five other officers, beating them with rods and umbrellas, The Wall Street Journal reported.

A Hong Kong police spokeswoman has described an officer firing a warning shot into the sky during clashes with anti-government protesters as “valiant” and “restrained” pic.twitter.com/24OrJqfMrN

“Pointing the gun at the sky was the best option under a situation with no other choice,” Senior Superintendent Yolanda Yu Hoi-kwan told reporters early Monday. Yu said officers’ lives were in danger and the gun was fired into the air to prevent injuries.

Yu said 15 officers were injured Sunday and added that radical demonstrators “say they are protesters, but their actions have far left the bounds of acceptable or rational behavior,” according to WSJ.

Hard-line demonstrators scattered bamboo sticks and put up traffic barriers on a main street to block police. Officers first put up warning flags in an attempt to disperse the crowd and then resorted to tear gas, which protesters responded to by throwing bricks and Molotov cocktails. 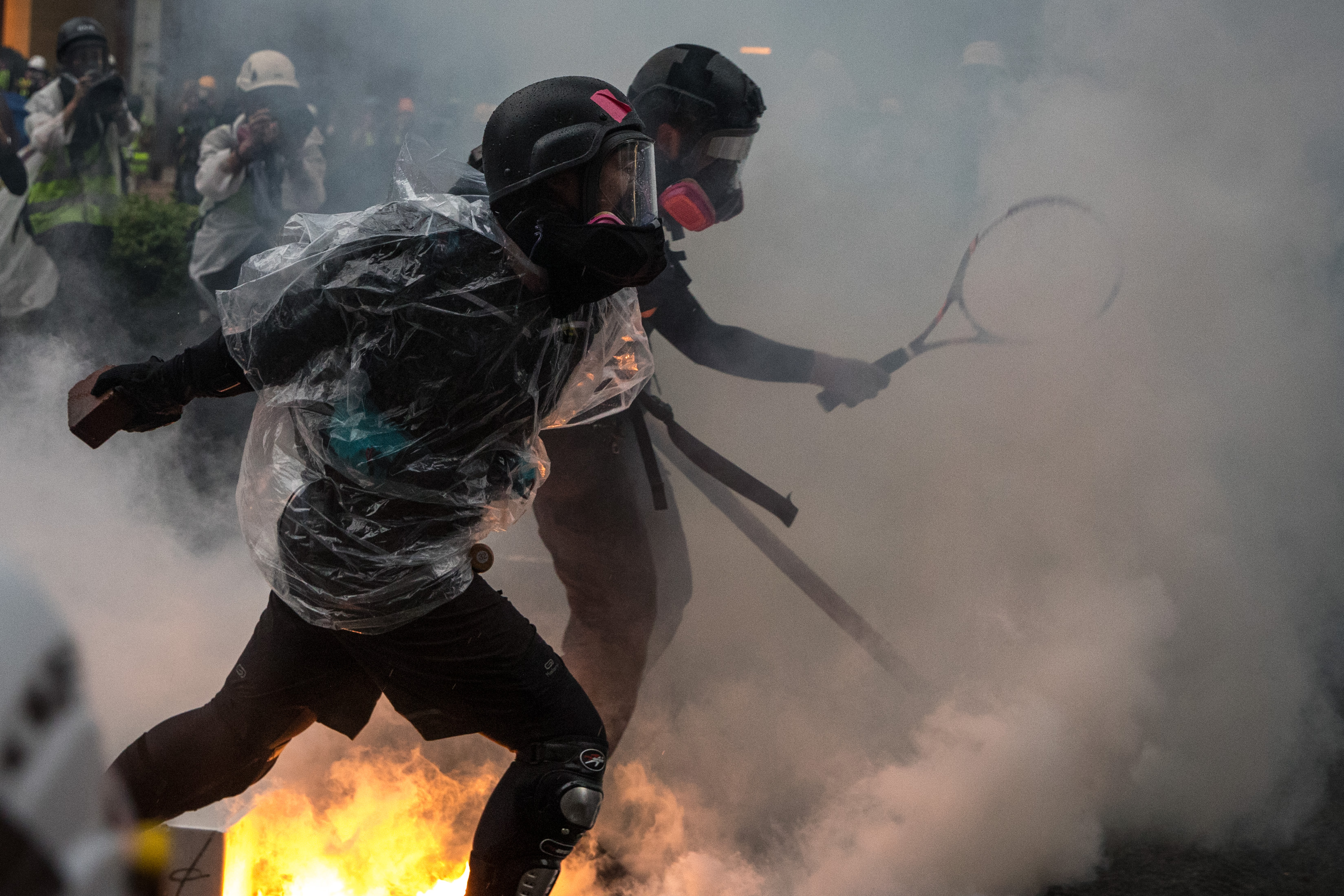 Protesters clash with police after an anti-government rally in Tsuen Wan district on Aug. 25, 2019 in Hong Kong, China. (Photo by Chris McGrath/Getty Images)

Police also brought out never-before-used water cannon trucks and a number of police vehicles with flashing lights. They fired a water cannon once to thin the street congestion, AP reported.

Some protesters argue that the more violent demonstrations are more effective than the peaceful demonstration. (RELATED: Protesters Forced Hong Kong International Airport To Cancel Most Flights)

“The escalation you’re seeing now is just a product of our government’s indifference toward the people of Hong Kong,” protester Rory Wong told AP.

There have also been reports of police allegedly making random arrests. Managing editor of Human Events Ian Miles Cheong said on Twitter Monday, “Police in Hong Kong are randomly arresting unarmed citizens. They will ‘disappear’ in mainland China once extradited. Understand why protesters are terrified for each other and fighting back.”

Police in Hong Kong are randomly arresting unarmed citizens. They will “disappear” in mainland Chinahttps://dailycaller.com/2019/08/21/simon-cheng-detained-china/ once extradited. Understand why protesters are terrified for each other and fighting back. pic.twitter.com/6fB49N07AP

Sunday’s police crackdown came amid Hong Kong’s ongoing extradition bill demonstrations that have seen a combination of peaceful and violent activity. More than 1.7 million people took part in a peaceful demonstration on Aug. 18, though smaller protests that took place weeks before saw violent tactics used by both police and protesters.

Hong Kong leader Carrie Lam met with more than a dozen politicians and academics in Hong Kong Saturday, many of whom urged her to respond to protester’s demands, according to WSJ.

“The real question is what is she waiting for?” lawyer and author of a book on dissent in Hong Kong Antony Dapiran told WSJ. “It’s been almost three months. The basic demands haven’t changed. None of the facts have changed except her sitting around hemming and hawing. She can talk all she wants, but if she doesn’t do anything then what’s the point?”