Indonesian Airplane Vanishes With 62 Passengers On Board, Crash Feared

An Indonesian Boeing 737 jetliner is believed to have crashed into the sea Saturday after air traffic control in Jakarta lost contact moments after takeoff, according to Indonesia’s National Transportation Safety Committee.

The aircraft, operated by Jakarta-based Sriwijaya Air, took off from Jakarta’s Soekarno–Hatta International Airport around 2:36 p.m. Western Indonesia Time (2:36 a.m. ET), after being delayed by roughly 56 minutes, according to FlightRadar24’s flight tracking data.

This is what we know about Sriwijaya Air flight #SJ182 based on ADS-B data.

It was raining at Soekarno-Hatta International Airport at the time of take-off, according to Al Jazeera.

En route to Pontianak, on the island of Borneo, and set to arrive at 3:15 p.m. local time, the airliner climbed to approximately 10,000 feet as it crossed the West Javanese coast minutes after takeoff. Moments later, it steeply plunged to 8,125 feet and then to 125 feet before losing contact with air traffic control; it is feared to have crashed.

There were 62 people on the airplane, according to local media, as reported by Bloomberg.

Indonesia’s search and rescue agency, Basarnas, has discovered some debris, according to Bloomberg. But Basarnas has yet to confirm if it belongs to the Sriwijaya Air Flight SJ182, the organization’s deputy head for operations, Bambang Suryo Aji, announced at a Saturday evening press briefing.

As part of the investigation, Indonesia’s National Transportation Safety Committee will examine the debris, reported CNN. 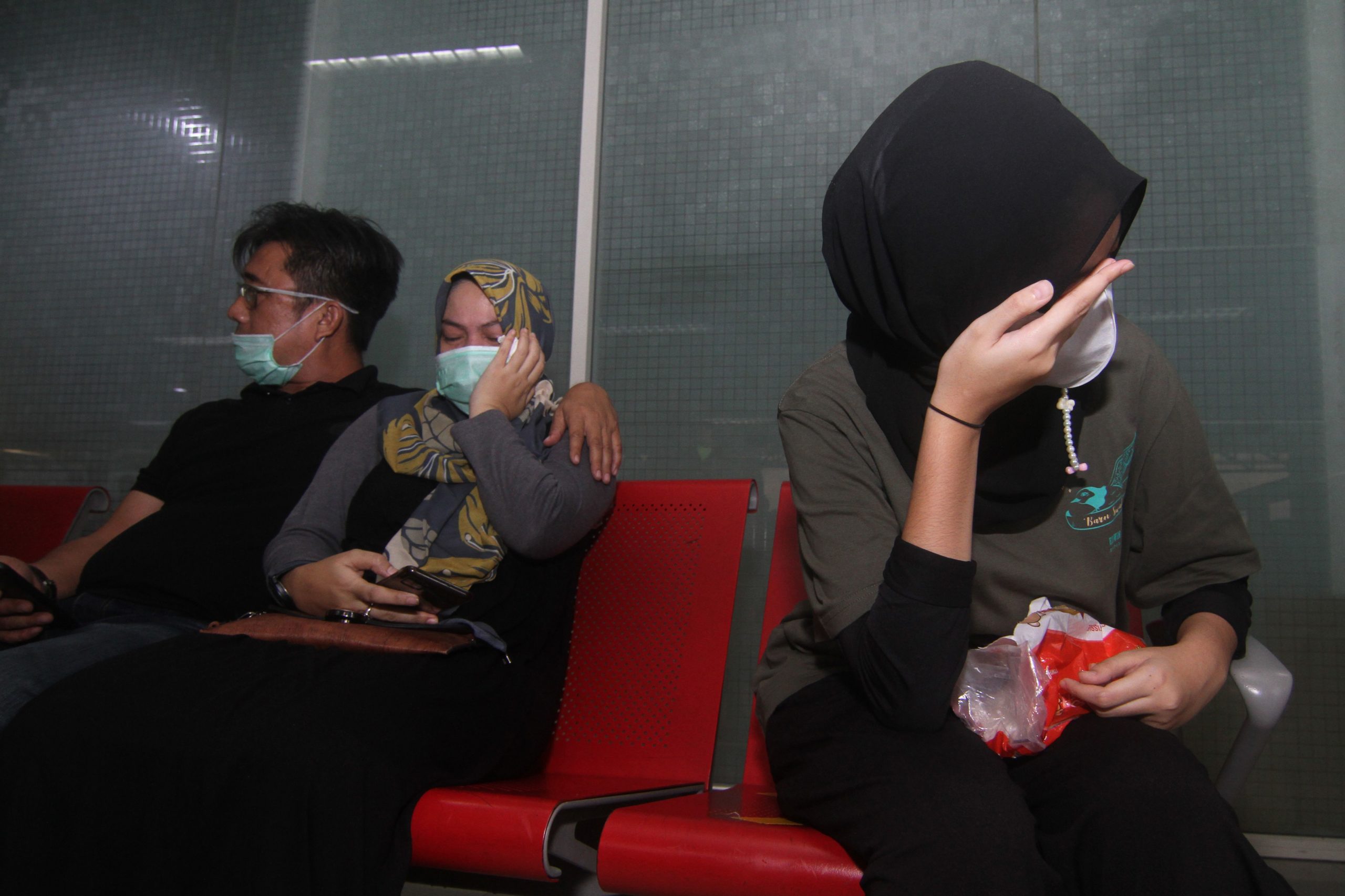 Relatives of passengers on board missing Sriwijaya Air flight SJY182 wait for news at the Supadio airport in Pontianak on Indonesia’s Borneo island on January 9, 2021, after contact with the aircraft was lost shortly after take-off from Jakarta. (Photo by LOUIS ANDERSON/AFP via Getty Images)

“We found some cables, a piece of jeans, and pieces of metal on the water,” a local security official told CNN Indonesia.

Furthermore, the Indonesian Navy has ascertained the coordinates of the area where the 737 went missing. They have been sent to “all Navy vessels in the area,” Navy official Abdul Rasyid said, according to Singapore-based The Straits Times.

No radio beacon signal had been detected from the missing plane, CBS News reported. Basarnas is investigating why the plane’s emergency locator transmitter ( ELT) was not transmitting a signal that could confirm if the plane had crashed.

“The satellite system owned by neighboring Australia also did not pick up on the ELT signal from the missing plane,” said Aji.

Sriwijaya Air President Director Jefferson Irwin Jauwena said in a news conference that the missing plane was airworthy and had flown to Pontianak and Pangkal Pinang city on the same day, according to CBS News.

“Maintenance report said everything went well and airworthy,” he said, further adding that the aircraft was delayed due to bad weather, not because of damage.

“We are aware of media reports from Jakarta, and are closely monitoring the situation,” Boeing spokeswoman Zoe Leong said, according to Bloomberg. (RELATED: Boeing Knew About Warning Light Problem A Year Before Fatal Crash, But Kept Info To Itself)

Boeing tweeted later in the day that their “thoughts are with the crew, passengers, and their families,” and that they are in contact with Sriwijaya Air, “ready to support them during this difficult time.”

We are aware of media reports from Jakarta regarding Sriwijaya Air flight SJ-182. Our thoughts are with the crew, passengers, and their families. We are in contact with our airline customer and stand ready to support them during this difficult time.

Sriwijaya Air said that it was “in contact with various related parties to get more detailed information” about the incident, adding that they will “immediately issue an official statement” when more information was clear, CNN reported.

A Lion Air-operated Boeing 737 MAX 8 plunged into the Java Sea in 2018 just minutes after taking flight, killing everyone on board.

Aviation incidents are not uncommon in Indonesia, a country with a poor air-safety record, according to reporting from CNN.

This is a developing story.