‘Sounds like one of John’s tweets’: McAfee’s doubtful widow shares PHOTO of his alleged suicide note

‘Sounds like one of John’s tweets’: McAfee’s doubtful widow shares PHOTO of his alleged suicide note

Posting a picture of John McAfee’s alleged suicide note, his widow Janice argued it sounded more like a draft tweet. She continues to doubt the official explanation by the Spanish authorities that McAfee hanged himself in prison. “This note does not sound anything like someone who has no hope and is contemplating ending their life. 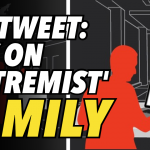