A military plane carrying 96 passengers crashed Sunday in the southern Philippines after missing the runway, killing 47 military personnel, along with three civilians on the ground, and injuring 49 others.

Maj. Gen. Edgard Arevalo, a spokesman for the Philippine military, confirmed the deaths in a Monday news conference, according to Reuters. Philippine defense secretary Delfin Lorenzana said in a tweet he has ordered a full investigation “as soon as the rescue and recovery operation is completed.”

I have ordered a full investigation to get to the bottom of the C-130 incident, as soon as the rescue and recovery operation is completed.

I ask everyone to join us in praying for the the pilots, crew, passengers of the ill-fated C-130 aircraft as well as their families.

The Lockheed C-130 transport aircraft was carrying recently graduated Philippine Air Force troops to Jolo island in Sulu province for counter-insurgency operations against Islamist militants associated with Abu Sayyaf and other groups, according to Reuters.

“They were supposed to join us in our fight against terrorism,” Sulu military commander Maj. Gen. William Gonzales said in a statement, according to The Associated Press (AP). The Philippine government has been fighting Abu Sayyaf and other militant groups in the Muslim-majority Sulu province for decades.

Philippine joint chiefs chairman Cirilito Sobejana told reporters Sunday the plane was supposed to land at Jolo airport but “missed the runway trying to regain power” and instead crashed in the nearby town of Patikul, according to The New York Times. 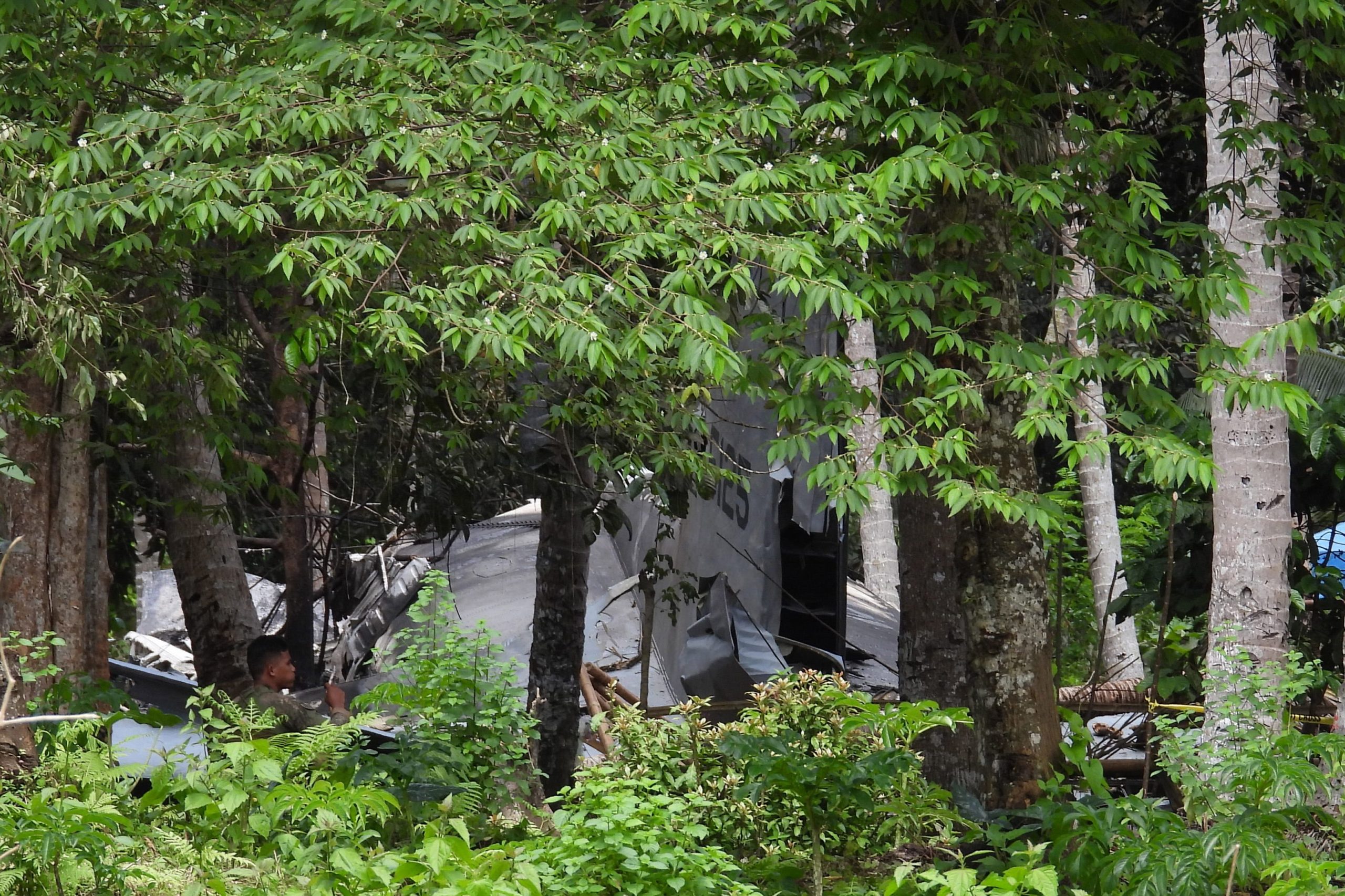 A Philippine soldier keeps watch near wreckage of a Philippine Air Force C-130 transport aircraft, which crashed July 4 and killed 50 people after it overshot the runway in Jolo town, Sulu province, on July 5, 2021 (Nickee Butlangan/AFP via Getty Images)

Joint Task Force Sulu said in a statement to CNN Philippines that witness accounts indicate a number of soldiers jumped out before the aircraft crashed and burst into flames. Both soldiers and civilians conducted a search and rescue operation as those injured were taken to a nearby hospital. Officials said there was no evidence the plane was brought down by insurgents. (RELATED: Military Jet Crash Leaves 2 Dead)

“We are determined to find out what really transpired in this very tragic incident, because according to available information the aircraft followed the specified protocols,” Arevalo said during Monday’s news conference.

The incident is the Philippine military’s worst air disaster and the fourth such crash in the country this year, according to The AP. A newly acquired Black Hawk Utility helicopter crashed during a night flight training in late June, killing three pilots and three crew members, CNN Philippines reported.