‘One Size Doesn’t Fit All’: Rural Americans Concerned About Their Communities Due To Coronavirus Shutdowns

The nationwide coronavirus lockdowns are revealing a disconnect between urban and rural counties, where viral outbreaks have not been of comparable size or speed but precautionary measures have generally been the same.

Many residents of rural counties are growing impatient with statewide restrictions that often make sense in urban centers, but may not in smaller, rural populations.

Isolated rural areas could also experience a larger, delayed outbreak when gradual reopening is eventually allowed. The prospect of economic devastation mixed with state overreach and the possibility of a delayed wave of infections have many rural Americans concerned.

New York city, the U.S. coronavirus epicenter, has approximately 28,000 residents per square mile. Subway trains are often tightly packed. Parks and playgrounds are usually busy. Apartment buildings, where multiple roommates often live in close quarters, are active at most hours of the day.

Density creates the conditions for virus transmission to spread rapidly, the New York Times reported. The virus reportedly flourishes in a densely-populated area such as New York or New Orleans, then spreads more slowly to rural areas. 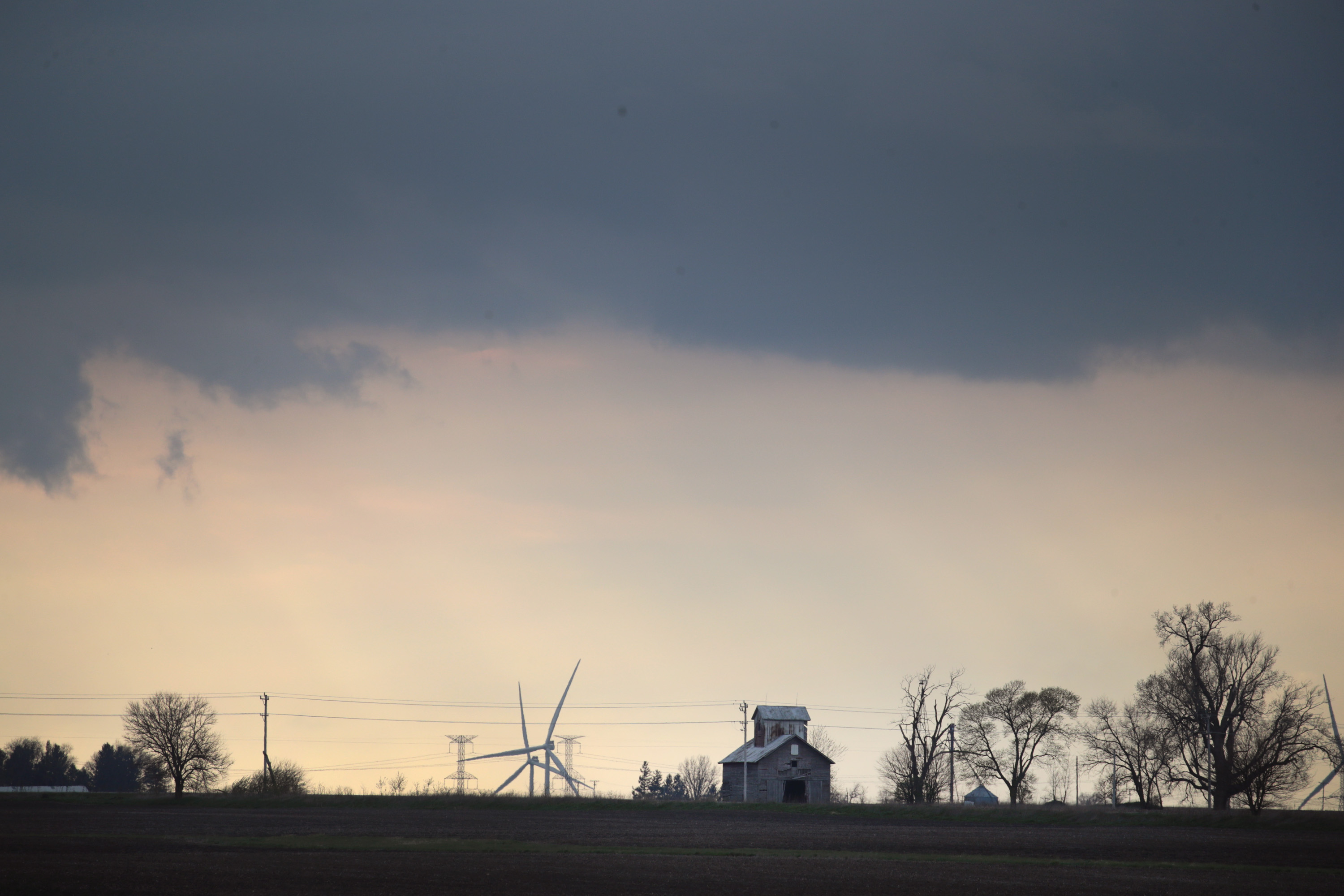 Rain clouds move over a farm on April 23, 2020 near Dwight, Illinois. Mild, dry weather has farmers in the state scrambling to get their fields planted. (Photo by Scott Olson/Getty Images)

Michael Wright is from Vermilion County, Illinois, where there have been 30 positive cases of coronavirus and one death. Wright told the Daily Caller it doesn’t make sense to many people in rural Illinois to close down the whole state due to the large number of cases in Chicago. There have been 94,191 total coronavirus cases in Illinois. Chicago alone accounts for 36,339 of those.

“Many of us feel that for counties like ours, this lockdown is unnecessary now,” he said. “In the beginning we were perfectly willing to follow the orders to protect our healthcare system and not overwhelm it, it’s something we were all glad to do.” 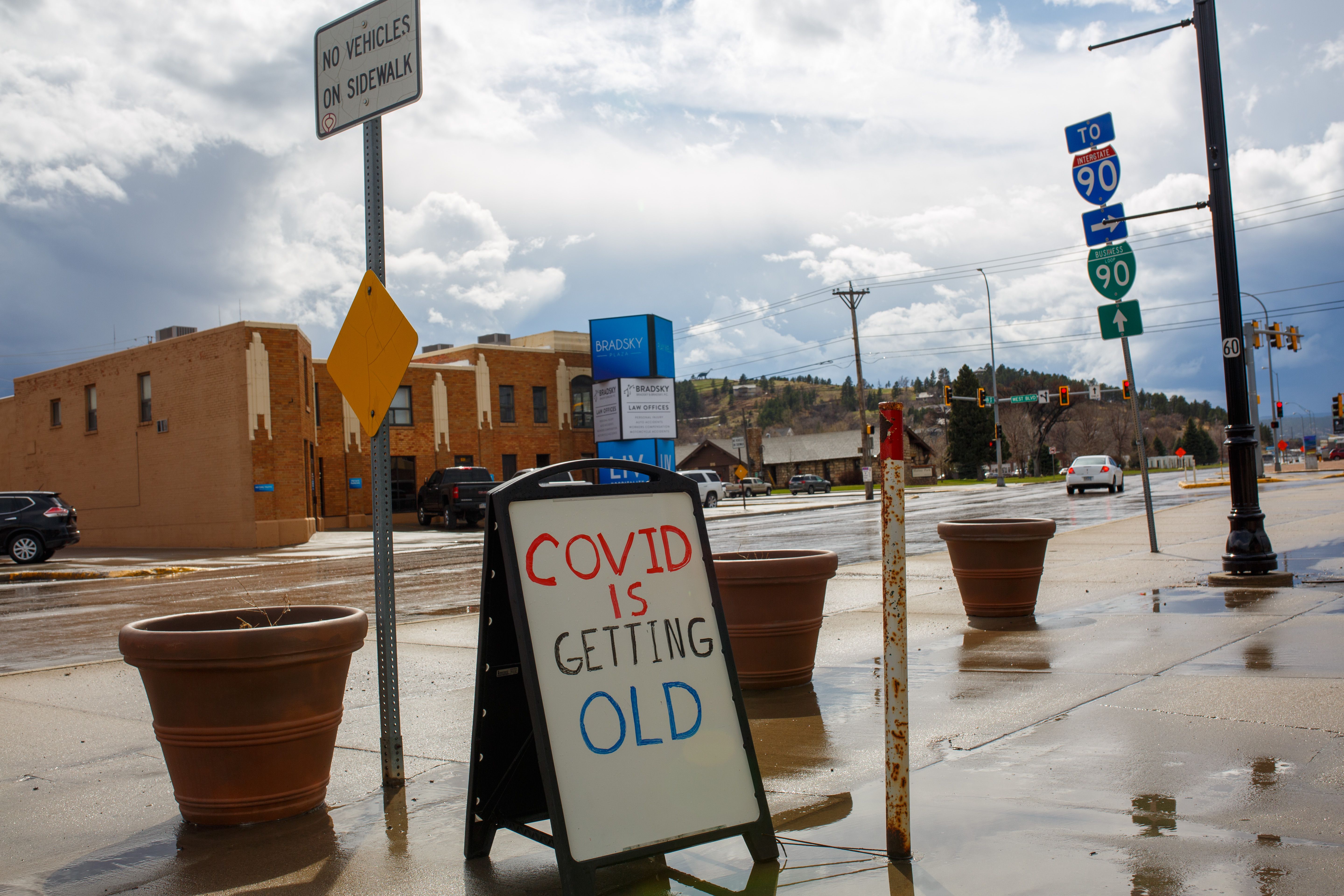 A sign reading “COVID is getting old” is seen on April 23, 2020 in Rapid City, South Dakota, amid the novel coronavirus pandemic. (Photo by KEREM YUCEL/AFP via Getty Images)

Wright, who turns 60 in July, was born and raised in Danville. He fears for the future of rural counties in Illinois, especially after what he says has been years of mismanagement by politicians.

“This may be the nail in the coffin for it and many other small counties and communities in Illinois,” Wright said. “It’s hard to see the way things are now, and not knowing if you will ever get back to work is not only psychologically devastating for many of us, it’s also demoralizing for those of us that had worked our whole lives just to make ends meet and now are staring devastation in the face.”

Wright also rejects what he believes are mischaracterizations of rural Americans as backwards or uninformed about coronavirus.

“Not everyone that comes from a small county is an ignorant hick like some would make us out to be,” he said. “Many of us stay informed and we’re not that easily fooled by what some of these so called leaders of ours are doing.”

Stephen Murray is from Karlstad, Minnesota, a town with less than 800 people. Murray is graduating from high school this year and told the Caller that he feels that one size “doesn’t fit all” when it comes to sweeping statewide restrictions and guidelines.

“Being an agriculture community, most bets are off now that spring is here,” he said. “I would say we are living proof that one size doesn’t fit all. We have a graduation class of 16 kids.”

In many states, Americans in rural areas had to observe the same restrictions as those in urban areas, meaning that “non-essential businesses” were closed and that residents had to stay at home.

Tamara McElroy, from a farming community in Montcalm County, Michigan, moved to the state from California after retiring. McElroy has become increasingly concerned with Democratic Michigan Gov. Gretchen Whitmer’s handling of the coronavirus response in Michigan. (RELATED: BEAVER: Trump Is Keeping America’s Food Supply From Disaster)

Michigan residents have organized multiple protests against Whitmer’s ongoing stay-at-home order, which was extended in early May through May 28. One protest organizer for the Michigan Conservative Coalition, Marian Sheridan, told ABC 13 that although Whitmer claims the restrictions are about public health, it appears her actions are aimed at pushing a “progressive radical agenda.” 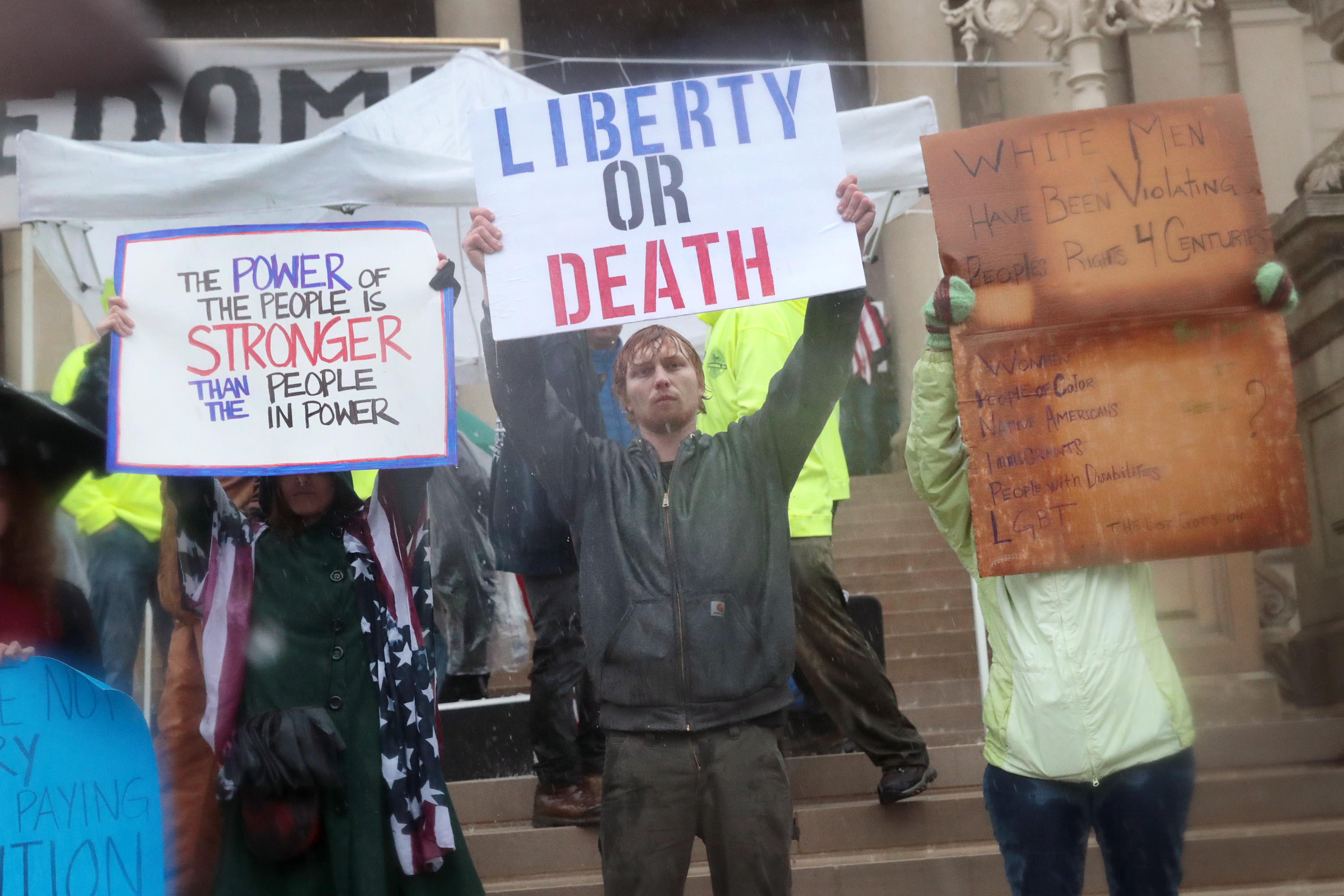 Demonstrators hold a rally in front of the Michigan state capital building to protest the governor’s stay-at-home order on May 14, 2020 in Lansing, Michigan. (Photo by Scott Olson/Getty Images)

“As time progressed, we’ve witnessed Gov. Whitmer tightening the reins in an unreasonable fashion,” McElroy told the Caller. “We were told what we could or could not purchase at Wal-Mart. We were told that we couldn’t take our boat out on our own lake and that liquor stores, marijuana sales and abortions were essential, but doctor’s appointments, gardening and fresh air were not.”

In some states, like Vermont and Michigan, “essential” shops that could remain open during the business shutdowns were ordered to forbid the purchase of “non-essential” products. In Michigan, an order required stores larger than 50,000 square feet to close areas dedicated to carpeting, flooring, furniture, and garden centers, among other departments, according to Business Insider.

Residents of rural communities are especially concerned about small businesses, which are often placed at a disadvantage during normal times when large business chains such as Wal-Mart open nearby.

The pandemic has impacted the food supply chain since many meat-packing plants have been closed and farmers aren’t able to sell thousands of animals, especially hogs. This has lead to a surplus and many farmers have few options other than euthanizing their livestock. 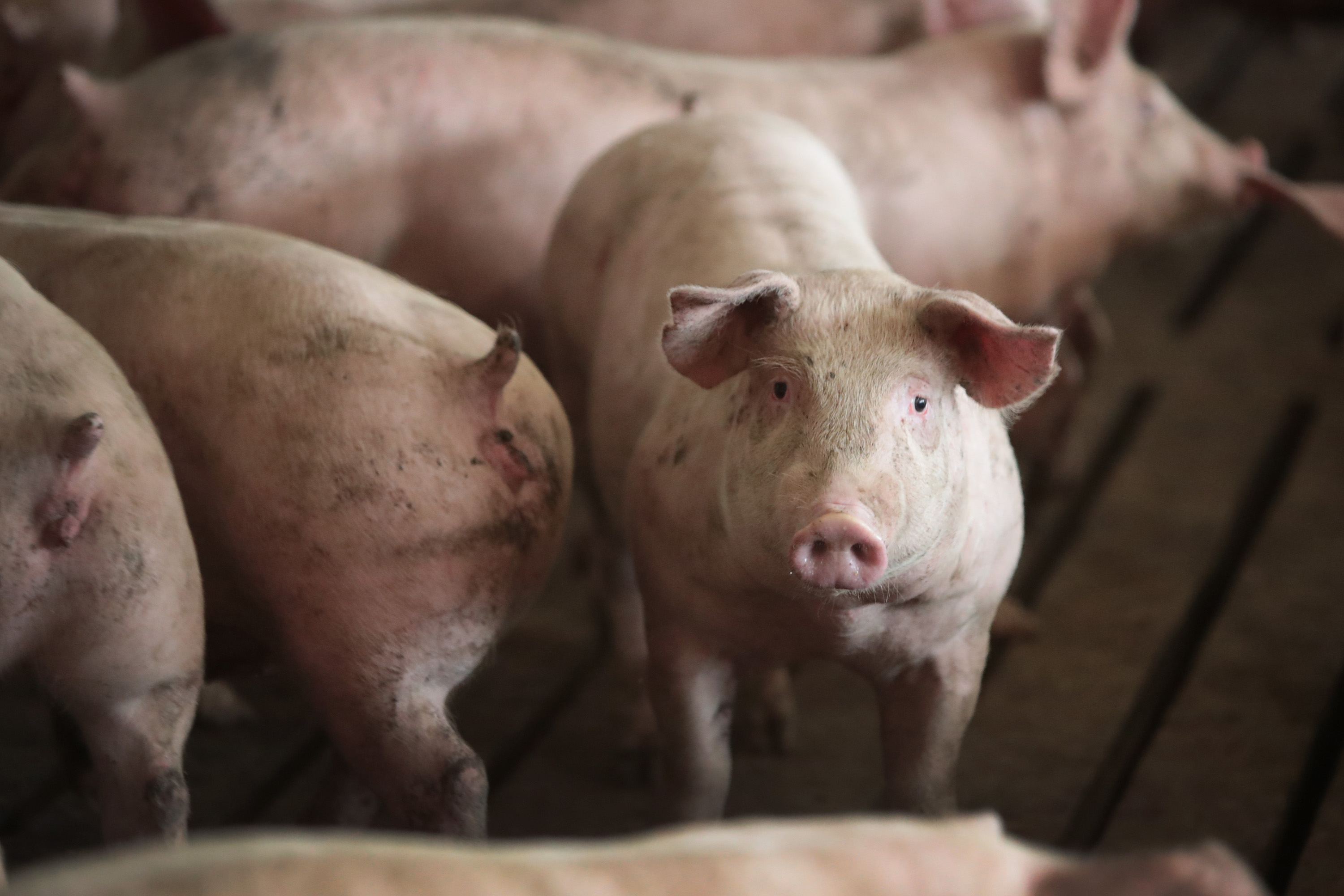 Hogs are raised at Old Elm Farms, a fifth generation family farm, on May 05, 2020 near Sycamore, Illinois. (Photo by Scott Olson/Getty Images)

Danny, a truck driver who hauls cattle and hails from Pittsburg, Kansas, described feedlots packed with cattle due to plants being shut down.

“These people out here work out butts off to get food on the table and it breaks my heart to see dairies, ranches, and farms go under while Wal-Mart is only allowing one jug of milk per family and jacking the cost of meat because they can’t figure out how to run their slaughterhouse,” he told the Caller.

Alanna, who lives in a rural New York county bordering Quebec, Canada, is also worried about local farmers and businesses like restaurants. She said she has been trying to support them alongside her community by ordering takeout.

“I think that the people hurting the most are the farmers who work with Canadian farmers to rent big equipment to till and plant,” she said. “With the shutdown, it is harder to get that work done and there’s no big equipment.”

“There are businesses that have continued because we are all neighbors and support each other. Local restaurants are takeout only, but we are all getting takeout when we can to support them,” Alanna continued. 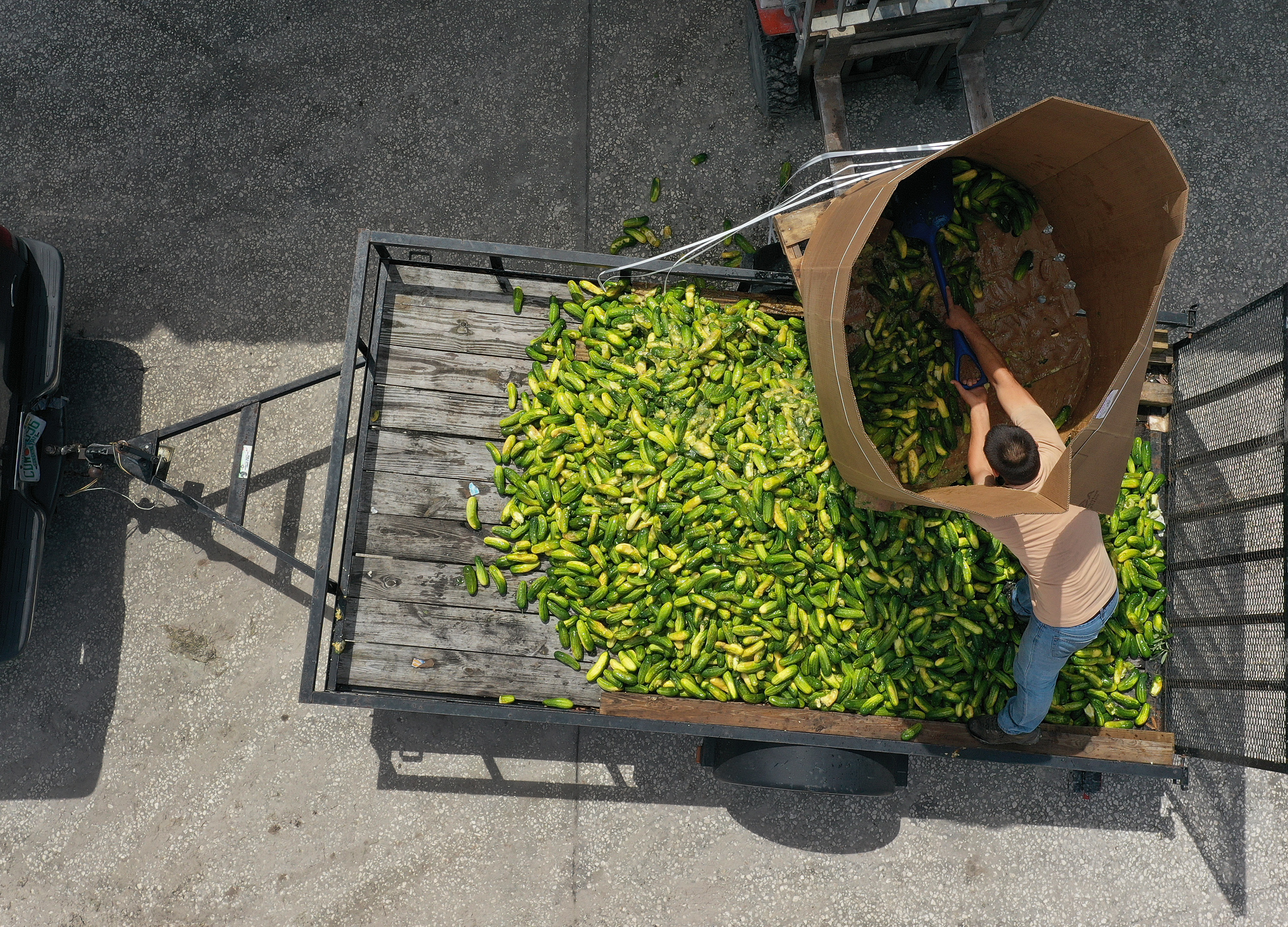 In this aerial photo from a drone, Omar Hernandez discards a container of cucumbers onto a trailer at the Long and Scott Farms on April 30, 2020 in Mount Dora, Florida. (Photo by Joe Raedle/Getty Images)

Fishermen are also having difficulties selling their catch.

“I hear that the fishermen have nowhere to sell their catch and the crabs are going to waste,” Lynn Ressler of Westmoreland County, Virginia told the Caller. She lives in a fishing and farming community where every restaurant, specialty shop and bait and tackle shop has been impacted by the state’s closings.

“Something Northern Virginia needs to understand is that we in the rural communities are survivors,” she added. “We know how to do without power, without water, without necessities.  We have lived through days and days without power or water after a major storm.”

Despite the challenges to local industry due to the pandemic shutdowns, Ressler has found a silver lining: the charitable character of her rural community.

“You know what makes rural America a great community? My neighbor just brought me a 12-pack of Angel Soft toilet paper,” Ressler said. “I am sure I’m not the only neighbor he is delivering toilet paper to tonight. That is how we do it in rural America.”