Pakistani officials arrested a U.S.-wanted terror suspected for his ties to the organization that carried out a 2008 terrorist attack on the Taj Mahal Palace hotel in Mumbai.

Hafiz Saeed is an Islamic militant and founder of Lashkar-e-Tayyiba (LeT), a Pakistani militant group connected to Al-Qaeda that focuses its efforts on targeting India. Ten Pakistani members of LeT slaughtered 166 people, including six Americans, in Mumbai between November 26 and 29, 2008, BBC reported.

“After a [10]-year search, the so-called ‘mastermind’ of the Mumbai Terror attacks has been arrested in Pakistan. Great pressure has been exerted over the last two years to find him!” President Donald Trump tweeted Wednesday morning. (RELATED: Pakistan Hasn’t Moved An Inch Since Trump’s New South Asia Strategy)

After a ten year search, the so-called “mastermind” of the Mumbai Terror attacks has been arrested in Pakistan. Great pressure has been exerted over the last two years to find him!

His tweet came just days ahead of his first official meeting with Pakistani Prime Minister Imran Khan in Washington, D.C.

In April 2012, the United States posted a $10 million bounty for Saeed’s capture imposed by the U.S. State Department’s Rewards for Justice Program, though he has been arrested, detained and released multiple times. In each instance, he was able to pay bail pending investigation and trial, the Associated Press reported Wednesday. 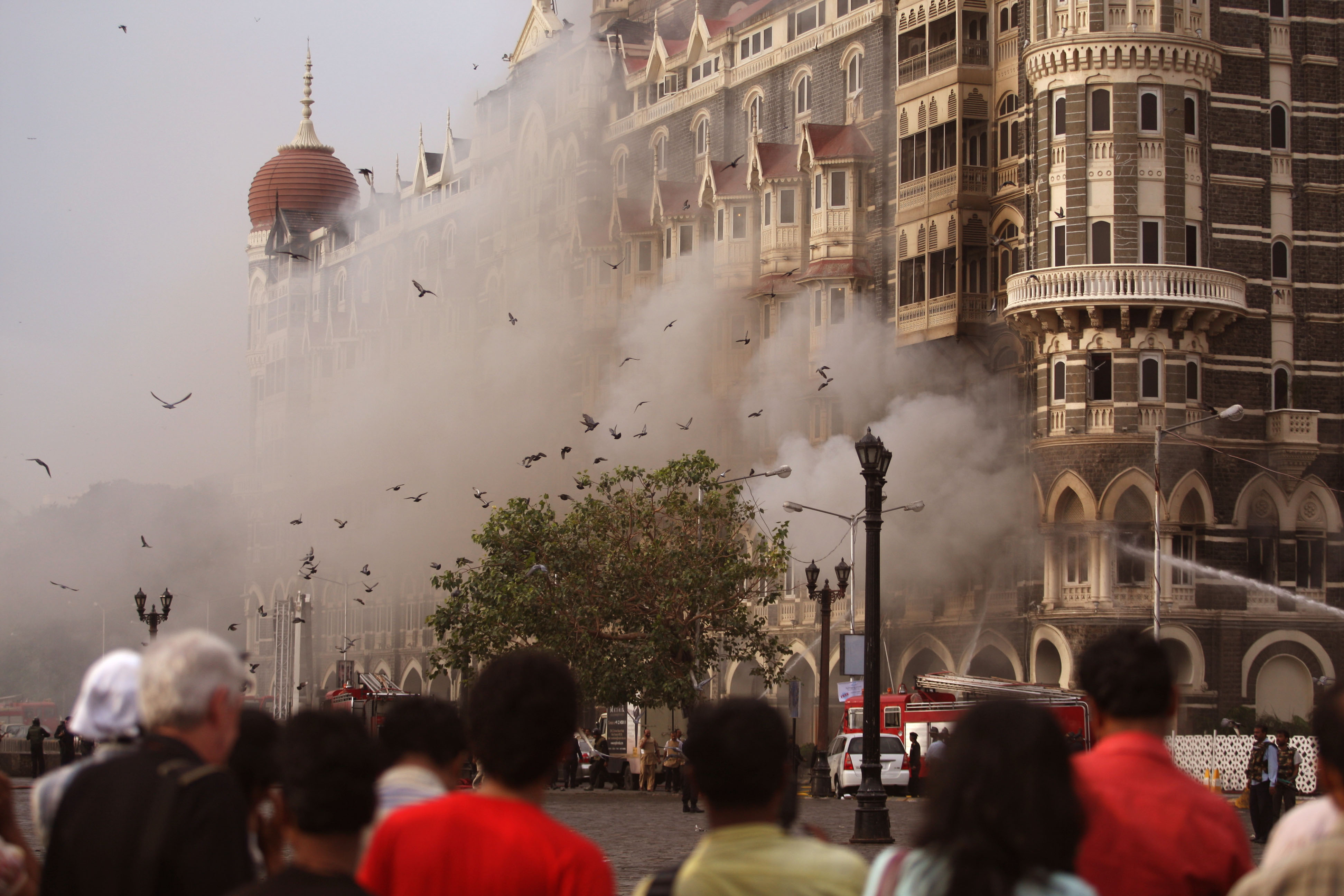 Locals look at a fire as it burns at Taj Mahal Palace and Tower Hotel following an armed siege on November 29, 2008 in Mumbai, India. (Photo by Uriel Sinai/Getty Images)

“Many times, I have been arrested on the order of America and India … [but] the Lahore high court freed me and also my organization, saying we were innocent of terrorism charges and did not participate in any terrorist activities,” Saeed told the AP after he was freed in 2016. (RELATED: Pakistan Frees Terrorist With $10 Million Bounty On His Head)

This time, the radical cleric and his associates were accused of funding militant groups through charities in about a dozen cases filed by the Pakistani government.

“In recent months, we have seen Pakistan detain some militants and seize assets belonging to front organizations raising funds for terrorist groups. While these steps are important, they are still reversible,” Alice Wells, the State Department’s acting assistant secretary for South and Central Asian affairs, said in June, according to The Wall Street Journal Wednesday.

“Pakistan must sustain these measures and expand upon them, including by prosecuting terrorist leaders,” she continued.

Some pundits have expressed skepticism with Saeed’s most recent arrest and the amount of news coverage it’s received considering his past arrests and releases, as well as his relatively well-known public presence in Pakistan.

Critics: alleged #Mumbai attacker arrest a “superficial tactic to placate US and others frustrated with #Pakistan ’s halfhearted efforts to crack down on militant groups.” @salmanmasood @gettleman https://t.co/i9UrXc2CuX https://t.co/skVBOnjCnY

What a sham Pakistan. Why even bother to arrest #HafizSaeed when he is granted pre arrest bail in vague cases. Why not arrest him for 26/11 where 166 people were massacred by Pakistani terrorists in Mumbai and prosecute Saeed based on evidence given by India, USA & FIA, Pakistan https://t.co/e9KVJ201Z9

Saeed’s spokesman, Nadim Awan, condemned the arrest and said the cleric separated himself from LeT in 2001 and currently has no ties to the organization. The group was banned by the Pakistani government in 2002, AP reported.

In recent months, the Pakistani government has also banned Saeed’s two charities, as well as schools, mosques and seminaries linked to LeT. The government froze the assets of Saeed’s charities to comply with a request from the U.N.