Pakistan is going through financial woes. The Government’s external debt sits at over 100 billion dollars [up significantly since 2017], while foreign currency reserves hovered in the range of 15 billion last July. To make matters worse, the Central Bank of Pakistan has been raising the interest rate in the last moths, from an initial rate of 6 percent up to 13.25 percent. In a recent article on Erdogan’s monetary policy ideas, I explained why spiking the interest rate isn’t wise. At the same time, private sector debt has gone up by more than a quarter since 2018. In July it started to dip a little. And for the current year, Pakistan’s industrial production has done nothing except to shrink as we see below.

Before we move on to the political and policy side of things, let’s have a look at Pakistan’s sectoral balances as percentage of GDP. Starting with 2016, the foreign sector received a larger chunk of the Government’s fiscal deficit funds, while the domestic private sector’s net share of it dropped significantly. 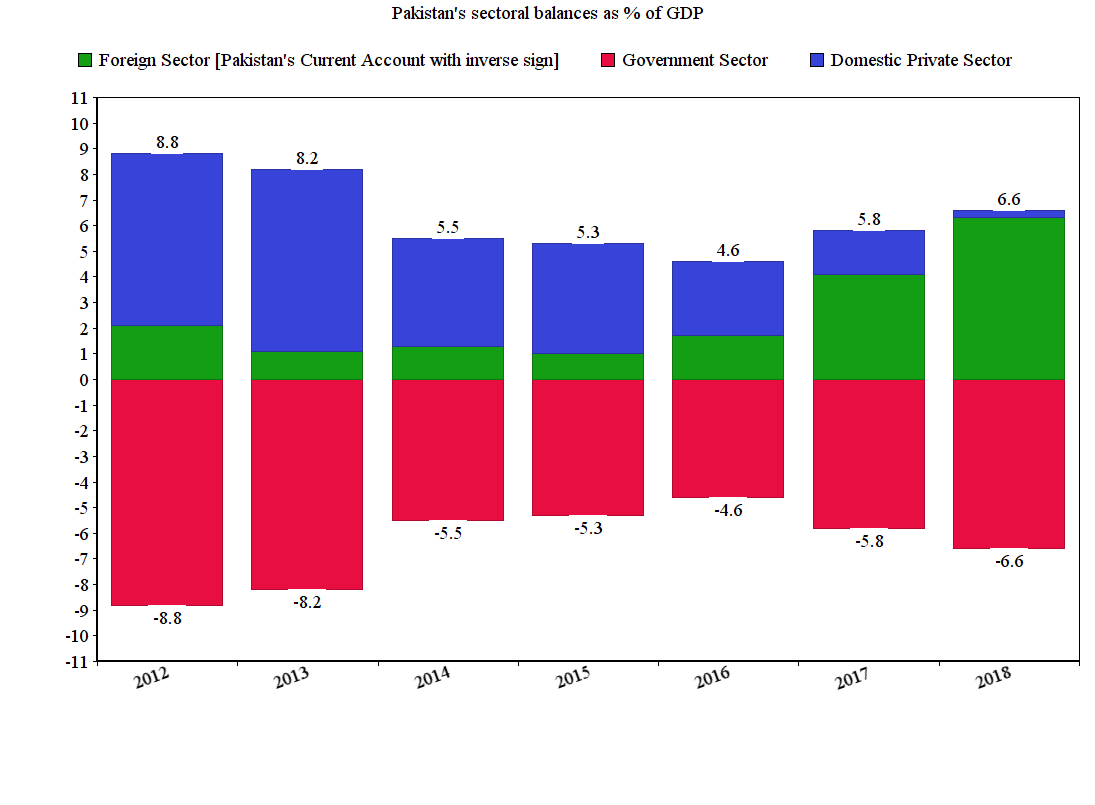 The Government of Imran Khan has only been in power for several months; and the rising inflation [reaching over 10 percent in July] during this period has been blamed on the former administration. People at grassroots aren’t blaming Khan for the problems, and they still have hope his Government will fix the economy. The IMF approved a three year 6 billion dollar loan “to support Pakistan’s economic plan, which aims to return sustainable growth to the country’s economy and improve the standards of living.” Despite pledging not to seek IMF assistance, Khan changed his mind… and earned himself the nickname of prime minister of U-turns. He also seeks foreign investment to get out of the crisis; so much so, in fact, that Khan, in an interview with Al Jazeera on the issue of Chinese reeducation camps for its Muslim minority [the Uyghurs], said he doesn’t know anything about it. Instead, Khan underlined the great business relationship between the two countries, naming China “the best friend” for Pakistan. Beijing doesn’t forget state partners who remain loyal, so I expect Chinese investment will ramp up in a timely fashion.

For the next year, the Government budget will have to be made up according to IMF conditions, which means that austerity is in order. People fear a rise in taxes and there’s talk about potential strikes due to layoffs. When we look at the tax changes in recent years, we observe three things. The personal income tax rate in Pakistan has remained, on average, 20 percent. But the corporate tax rate has gone down in 2014 [from 35 to 34], and by another percentage point in each subsequent year. It stabilized at 31 percent in 2017. While the sales tax went from 16 to 17 percent in 2014 and remains so. Now, all these taxes are regressive, and they should be abolished. As always, the fiscal advice I give is: land-value capture untaxing wealth creation [labor, buildings, sales, and enterprise] asset side rules for the banking sector in order to combat financial speculation permanent zero interest rate policy to further minimize cost pressures on output. Khan’s administration will, no doubt, levy austerity policies to comply with the IMF’s desires. If they’re prudent, they’ll be able to cut more into the fat and less into the muscles and organs of the economy.