WASHINGTON (Reuters) – A day after President Donald Trump fired his defense secretary, the White House installed a Trump loyalist in a key Pentagon post on Tuesday and promoted another one who has falsely called former President Barack Obama a terrorist. 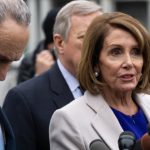