Pipeline wars are often overlooked in the scheme of things, where pipelines represent competing national interests of a purely economic sort, beyond the usual political rhetoric surrounding ideology and demagoguery.

Because a gas pipeline transports natural gas and not political ideology or dogma, the discussion about policy as driven by pipeline construction is generally considered unexciting by pundits. But maps of existing and proposed oil and gas pipelines may provide insight into geopolitical alliances and divisions, and a pipeline route may expose some underlying consideration for mysterious international events, which can only make sense when viewed from an economic point of view.

Construction of the Iran-Iraq-Syria pipeline was abandoned when the Obama regime forced new sanctions on Iran in 2010, at the behest of Israel, causing the Swiss engineering concern key to its construction, to scupper the project. Also shown above is the south Pars field pipeline from Qatar, a pipeline to compete with the Friendship Pipeline, which caused friction between Qatar and Iran for many years.

The proposed Qatar-Syria-Turkey pipeline was abandoned when Turkey sought to destabilize and remove the legitimate Syrian government from power, and failed. Erdogan wanted to remove the Syrian leadership, just as the United States and Israel hoped, when Syria favored the Iran-Iraq pipeline over the Qatari plan, which cut Turkey out of the pipeline route. A brief analysis of the Turk opinion appears in the 2012 ANSA article, Syria: new markets for Qatari gas without Al Assad .

The failed Turkish pipeline ambition here goes some way to explain Turkey’s aggression in northwest Syria (where the PKK are few) and exposes the hypocritical position of Turkey’s desire to eject refugees from Syria when Turkey is (in part) to blame for the crisis there.

The TurkStream pipeline is a partnership between Turkey and Russia to supply natural gas to Turkey and Europe. The pipeline is opposed by some EU states via so-called anti-monopoly rules, where a supplier of gas cannot own the means of delivery. (Interestingly, that should render all US-sponsored LNG illegal in Europe, but the “logic” of EU double standards will not be addressed here.) 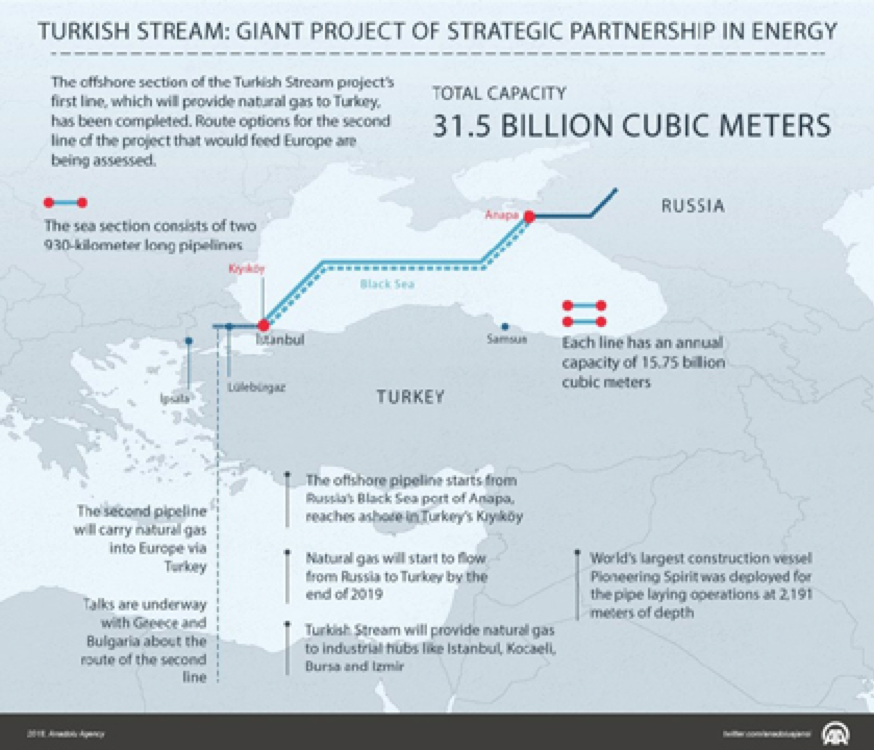 The TurkStream project provides Turkey with some important energy leverage when Turkey has no domestic oil or gas production, and must rely on Iraq and Libya for cheap oil, and is also supplied by the Russian Federation.

Russia’s Nord Stream 2 pipeline from Russia to Germany is nearly complete, however the Denmark transit permit process has yet to be approved. The United States is pressing Denmark to deny the permit, and otherwise threatening US financial sanctions and penalties vs Denmark, should Denmark approve it. 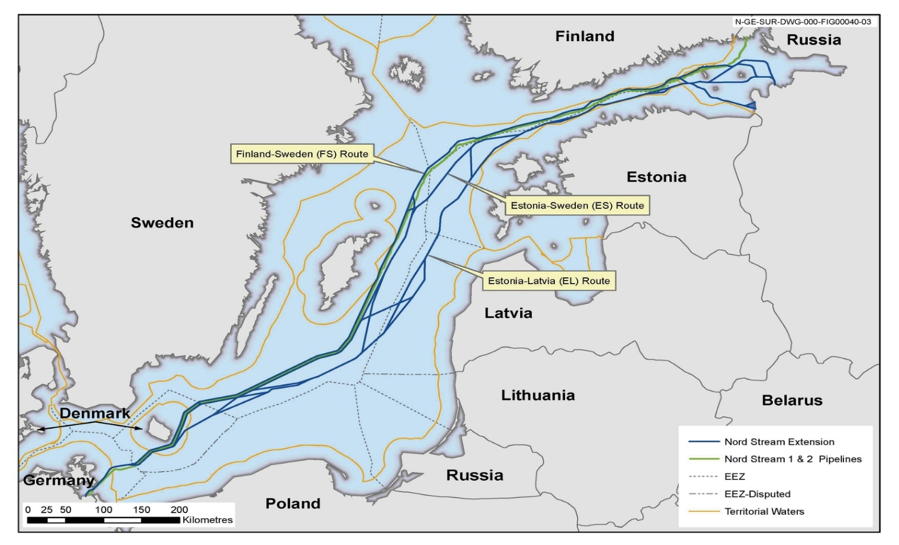 The US argument goes that European reliance on Nord Stream 2 threatens European autonomy in energy supply, thus endangering European security. But no mention is made of reliance on the US as a primary supplier of liquified natural gas, its greater expense, and requirements for more complicated and expensive LNG infrastructure. 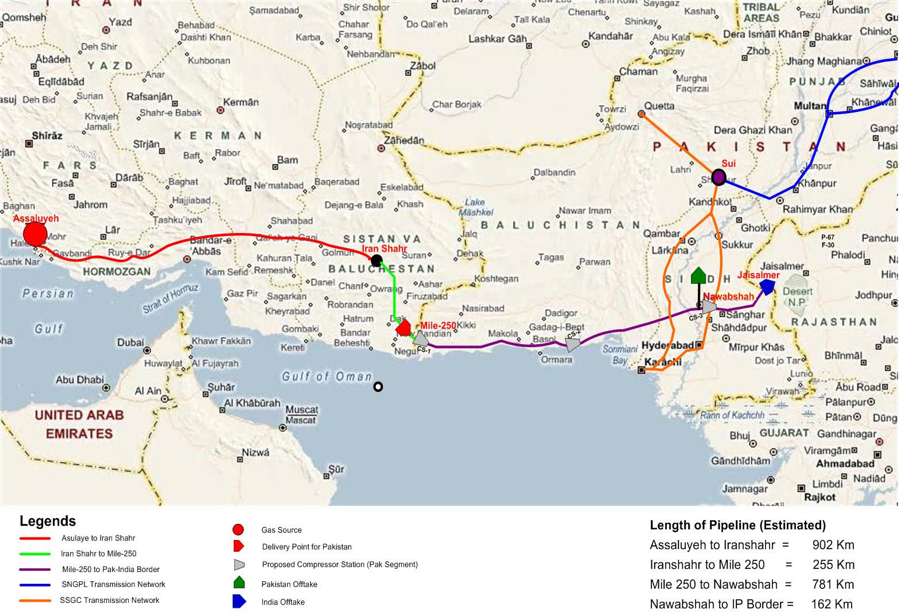 Further fall-out from US sanctions on Iran has impacted Pakistan’s contract to co-construct the Iran-Pakistan gas pipeline. A cessation of the project may result in significant financial loss for Pakistan, where the impact of secondary US sanctions on Pakistan (for partnering with Iran on the project) is still being assessed.

While it may seem quite logical for Pakistan to receive natural gas from Iran, the United States has been supplying liquified natural gas to Pakistan, with US LNG accounting for 40% of Pakistan’s electrical power generation. For the US to lose the Pakistan gas market to Iran now, would be a blow to US LNG suppliers. 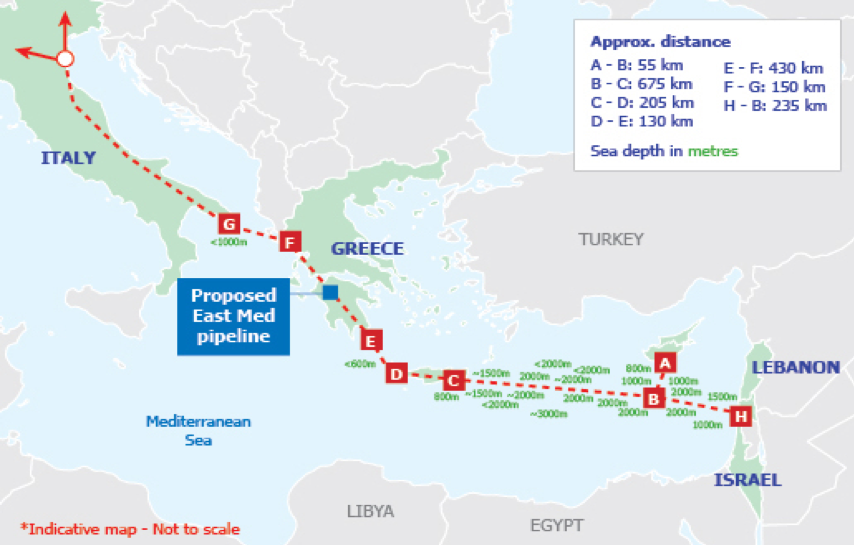 The East Med is a consortium of producers, consisting of Israel, Cyprus, and Greece, with further connection to a proposed gas terminal in Italy, which Conte has now put the kibosh on. The US supports the East Med pipeline because the US hopes to thwart Russian gas exports to Europe, a pure US energy power play, seldom reported in the west. Turkey is in the mix too, hoping to take advantage of a large new gas find off the coast of Northern Cyprus, to which Turkey is probably not entitled by international law.

Further complicating matters is the proximity of a large natural gas field to Gaza and Palestine, which Israel has refused to help develop, and of course Israel will not provide Palestinians with any means to do so on their own. Israel has refused to pay Palestinians the market price for gas produced from the Gaza field, and of course Israel’s occupation of Palestine – and brutal ten-year siege of Gaza – poses a major challenge to that end.

There are many other pipeline projects and proposals afoot, and the above is only an introduction to the complex geo-politics relating to oil and gas pipelines.  As shown, the economics of energy development is a major driver behind foreign policy and strategy, and may provoke tensions that lead to war.  A failed pipeline may not have a major consequence comparable to closure of the Strait of Hormuz for example, but the posturing and positioning of energy interests certainly plays a great role in foreign affairs, and as time goes on that role seems ever more fraught with danger.

Steve Brown is the author of “Iraq: the Road to War” (Sourcewatch) editor of “Bush Administration War Crimes in Iraq” (Sourcewatch) “Trump’s Limited Hangout” and “Federal Reserve: Out-sourcing the Monetary System to the Money Trust Oligarchs Since 1913”. Steve is an antiwar activist, a published scholar on the US monetary system, and has appeared as guest contributor to The Duran, Fort Russ News, and Strategika51.