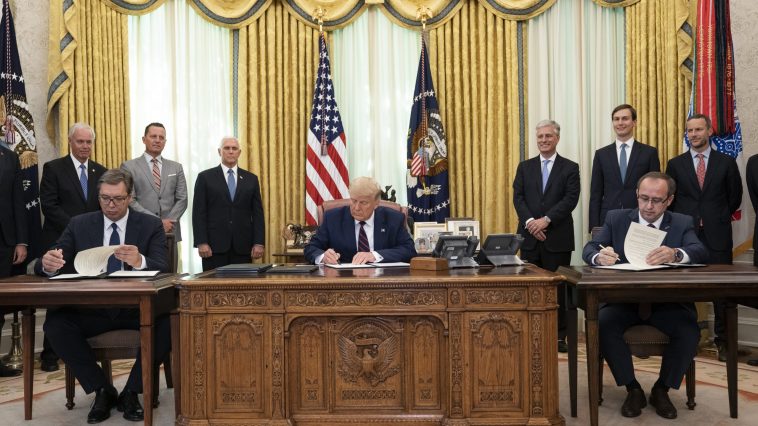 An interesting piece on an agreement brokered by President Trump between Serbia and Kosovo. This comes to our attention from our friends at www.OrthoChristian.com, and we reprint in part their piece:

At the White House on Friday, Serbian and Kosovar leadership signed an agreement on economic normalization that President Trump hailed as a “truly historic commitment.”

The talks leading up to the agreement focused on job creation and eventually establishing lines of transportation from Belgrade to Kosovo’s capital city of Pristina.

However, the agreement, signed by Serbian President Aleksandar Vučić and Kosovar Prime Minister Avdullah Hoti does not constitute recognition of Kosovo by Serbia, Vučić emphasized, reports the Albanian Daily News.

“There is no mutual recognition. People in Serbia can breathe freely,” he said.

If upheld, the agreement would be a major step forward, considering Kosovo’s history of persecution of the Serbian Orthodox Church.

“It is also important that both parties are obliged to promote the protection and free cultivation of various religions, interfaith communications, and in particular the protection of religious sites, as well as the implementation of court decisions regarding the properties of the Serbian Orthodox Church,” President Vučić commented…

Read more about this on www.orthochristian.com

This last of course is a thorn in the Orthodox Christian Patriarchate’s side, but it may be offset by the fact that the Orthodox Church can safely operate in Kosovo.