President Trump, “legal votes decide who is president, not the news media”

The mainstream media has launched a coordinated effort to proclaim Joe Biden President-Elect. President Trump and his campaign team have reminded Americans that “legal votes decide who is president, not the news media.” As Constitutional lawyer, Jenna Ellis explains: “Joe Biden is not the president-elect just because media declares him so.” 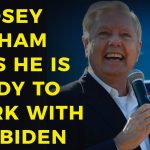