The Seattle Police Department refused to provide evidence Wednesday supporting the chief’s claim that the Capitol Hill Occupied Protest area is not a cop-free zone.

Police Chief Carmen Best claimed “there is no cop-free zone in the city of Seattle” during a press conference on Monday, Kiro 7 reported, though the apparent premise of the Capitol Hill Occupied Protest zone, formerly called the Capitol Hill Autonomous Zone, was to create an cop-free area protected by numerous armed citizens, the Daily Caller reported.

After multiple requests for information on the dates, times and locations of officers inside the Capitol Hill Occupied Protest, Truscott responded that she was “pulling numbers” but only sent a map of the protest zone of Seattle. 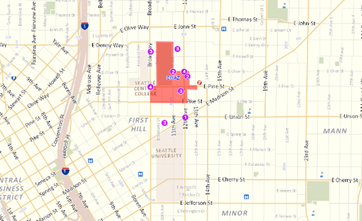 “For all other calls originating from this area, dispatchers and officers will attempt to coordinate officer contact outside of these boundaries when feasible,” Truscott added. “Officers have and will continue to document calls for service that originate within these boundaries.”

“The City of Seattle continues to meet with demonstrators to work toward long-term solutions to issues within this area,” Truscott said.

Best said officers responded to an emergency call Sunday night reporting a robbery and that instead of investigating the claim, officers on the scene watched from a distance and determined the issue was not life threatening, Kiro 7 reported.

“I can’t even get the police to show up, I can’t get the fire department to show up,” a man involved with the business told the Daily Caller. “I caught somebody in my building with my property, so I detained him, hoping the police would show up, but they didn’t show up,” he added.