Serial Killers Alive And Dead In The News 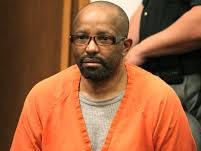 Two American serial killers were in the news this month: one for a good reason.

Anthony Sowell (pictured), the monster who murdered eleven women in Cleveland, Ohio between 2007 and 2009, died on February 8. Aged 61, he was being treated at a medical center for prison inmates. The mother of his first victim spoke to WKYC; unsurprisingly, she said she was glad he was dead.

Friday night saw what is said to be an Internet first, or if not an Internet first then certainly a YouTube first, a live call-in to a YouTube programme from a serial killer. Like Anthony Sowell, Dellmus Colvin was born in Ohio, the same month in fact. Sowell was born August 19, 1959, while Colvin was born August 3. Unlike Sowell, he is relatively unknown, possibly because he murdered only seven women, and over a much longer period. And the YouTube channel he appeared on belongs to…would you believe Shaun Attwood?

Convicted drug trafficker turned author and interviewer Attwood is best known for interviewing cranks and making unwarranted jibes at the Royal Family, but not all his guests are deadbeats or idiots. The programme that went out on Friday night is something special for true crime buffs. As for Dellmus Colvin, he has been behind bars since November 2005, sounds happy, and is clearly unrepentant. If you haven’t been in the presence of evil before, check out this dude. Sadly, like Sowell he will die of natural causes, unless he is shanked by another psychopath out to make a name for himself.