The Financial Times ran a piece on September 10th about the doctor in Sweden who charted that country’s course through the COVID-19 pandemic without shutting the country down. Many people have probably heard at least something about this, but probably not much detail. Here we present selected excerpts of the FT piece (and of course a link to the whole piece), supplemented by additional material and comment.

At the start of this year, Anders Tegnell was just a low-profile bureaucrat in a country of 10m people, heading a department that collects and analyses data on public health. Today, he has become one of the best known — and most controversial — figures of the global coronavirus crisis.

For many Swedes, their state epidemiologist has embodied a rational approach as other countries have appeared to sacrifice science to emotion. “I wish I were coming with you to see him,” one of Sweden’s leading chief executives confided to me just before I went to see Tegnell. “The way he has stood for what he believes in while the rest of the world does something else is admirable.”

Public support for Tegnell has remained high over a period in which life, while very different to before, has been more normal than in many other countries. Such is his stock in Sweden that there are stories of people having his bespectacled face tattooed on their bodies, while some on the American and British right have seized on Tegnell as a champion of freedoms they feel they have lost during lockdown.

Consider by comparison our Dr Anthony Fauci in the United States, who has also enjoyed (or been beset with) alternating fame and criticism (some of that coming from our publication), as the American “demigod” of Coronavirus response. Yet Dr. Tegnell took a far different tack, and to Richard Milnes, his non-Swedish interviewer and rather thoroughly indoctrinated in the “mask up and shut down” COVID theology, what Tegnell did amounts to some kind of crazy, deadly heresy. We continue:

But for a minority domestically, and many internationally, he is a far more problematic figure. The populist Sweden Democrats have called for him to resign after thousands of elderly in care homes died. That has given Sweden the fifth-highest death rate per capita in Europe, five times higher than neighbouring Denmark and about 10 times more than Norway and Finland.

For some local experts, Tegnell’s standing alone as the world locked down inspires none of the CEO’s veneration. “Tegnell is known for his stubbornness. You wonder what this would have looked like with a different person in charge,” says a Swedish epidemiologist who has been a critic of Tegnell’s. International media have been harsher still: The New York Times has called Sweden a “pariah state” and “the world’s cautionary tale”.

[DR. TEGNELL] “At the outset, we talked very much about sustainability, and I think that’s something we managed to keep to. And also be a bit resistant to quick fixes, to realise that this is not going to be easy, it is not going to be a short-term kind of thing, it’s not going to be fixed by one kind of measure. We see a disease that we’re going to have to handle for a long time into the future and we need to build up systems for doing that,” he says, with his arms crossed tightly to his chest as they are for nearly the entire hour-long interview.

This is indeed a very rational assessment. As COVID began its meteoric spread from China, I also early on realized that this was not a “flare-up” that would eventually die out, as many American politicians posed. That kind of thing had happened before with SARS, MERS and H1N1 “bird flu” in the past, but COVID-19 was a new creature and its appearance in all areas of the world without regard or response to climate (“It will die by summer, like the flu”), and its particular and peculiar predilection for the United States, Brazil, Western European and Russian people suggests that there is possibly something particular about these nations and their people that is more conducive to the virus and its spread – something which I have not yet seen an explanation offered for. SARS-Cov-2 was the new endemic illness as well as a pandemic. This one may eventually become a somewhat rare backgrounder, but it will always be with us. That is my assessment, based on little more that observation of the pattern of the spread and the observation of the nations in which the disease has been most active. We continue:

Our meeting comes as things appear to be going his way. As coronavirus cases rise in pretty much all other European countries, leading to fears of a second wave including in the UK, they have been sinking all summer in Sweden. On a per capita basis, they are now 90 per cent below their peak in late June and under Norway’s and Denmark’s for the first time in five months. Tegnell had told me the first time we spoke in the spring that it would be in the autumn when it became more apparent how successful each country had been. 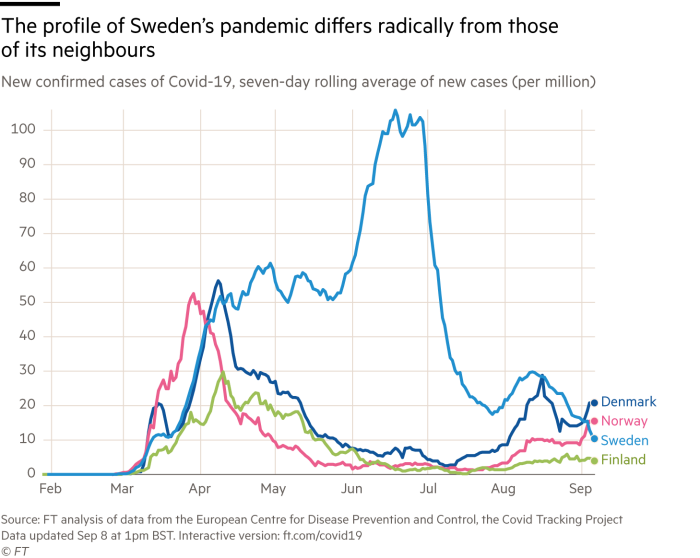