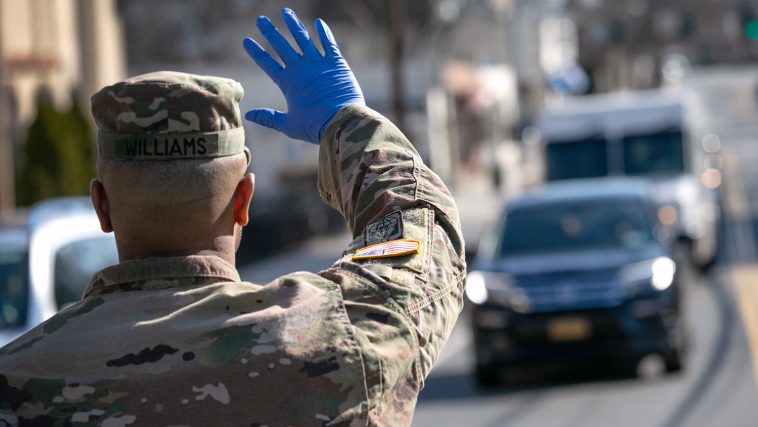 NEW ROCHELLE, NY – MARCH 18: A U.S. National Guard soldier stops traffic as fellow troops distribute food to local residents at the WestCop community center on March 18, 2020 in New Rochelle, New York. The troops have been deployed to New Rochelle, which has been a hot spot for the COVID-19 pandemic in the U.S. (Photo by John Moore/Getty Images)

Dr Steve Turley comments here on a Newsweek piece from last week noting that certain unnamed officials in the Pentagon are cooking up contingency plans to act in case President Trump should try imposing martial law to deal with the fraudulent 2020 elections. Yes. Fraudulent.

It is unclear whether or not the President actually intends to do this, but Newsweek was harping on the political line of resistance to the President. Steve Turley points out in his video how the presence of a group of military and former / ex military officials trying to find a way to defy such a declaration is paralleled with the reality that many military officers who DO support the President.

We are still at “speculation” here, of course, but, well, 2020 was crazy, wasn’t it? I cannot discount any possibilities at this point. Nevertheless, the President is very popular with many in the military (just certain officers who are globalists and ‘we hate Russia no matter what they do’ at heart are definitely chagrined by the President’s ‘America First’ domestic and foreign policy.)

It is likely something is coming. Push has to come to shove sooner or later, and it is difficult to imagine the President suddenly just caving to Biden’s win. The reason is that the fraudulent victory is too clear. In our earlier piece featuring a video presentation by Mayor Rudy Giuliani, that case is made resoundingly clear. The only way for there not to be fraud in this election at a very major level is for people to refuse to accept that it really happened.

President Trump knows this, as do most of his supporters. We also know we cannot just bend over one more time.