The Art of War in the 21st Century

Authored by Cynthia Chung via The Strategic Culture Foundation:

Sun Tzu’s The Art of War is one of the most influential books written on military strategy and philosophy. This is not confined to just Asians but Europeans and Americans alike have attempted to study The Art of War hoping its wisdom would be revealed to them.

However, it is clear with how the western intergovernmental military alliance, known as NATO, has chosen to conduct itself since its inception in 1949, that western understanding of long-term military strategy has left much to be desired.

The largest folly they continue to commit is that they think that it is through stubborn force and intimidation that one gets their way. True one may be successful to a certain extent using mainly force, one may achieve that assassination of a key figure, one may convince the people that their ally is their foe, and one may get that regime-change they were hoping for, but these have all proven themselves temporary orientations in the long-term scheme of things. One reason for this is that the truth almost always eventually comes out

It is a very tiring strategy one has to admit, to be always using stubborn force, and despite all this force that one is constantly applying to the subject they wish to bend it never quite behaves as one commands it to, at least not for very long.

Despite this strategy being the most inefficient and energy intensive, that has not deterred imperialists from mulishly using it over and over again. The world has been an unbending subject to such a strategy since Churchill’s announcement of the Iron Curtain in 1946. That is, the world has been subject to an ongoing cold war for 74 years.

However, this seemingly never ending war has been a complete failure.

Russia, China and India are much stronger in every way than they were in 1946, despite all efforts to prevent this, and have become veritable leaders in the world. The world population in 1946 was roughly 2.5 billion people. No doubt there was the thought that if war continued as it did during WWII (which caused roughly 85 million deaths), that with a few more rounds of those kind of numbers, the ‘subject lands’ would be nicely culled and obedient to their masters. Instead we have seen the world population increase to 7.8 billion people, most of this growth occurring in the so-called ‘subject lands’.

Despite all the havoc and destruction, force has most clearly shown itself not to be the most powerful tool in weakening the ‘enemy’.

So what went wrong with a military strategy that seemed impossible to lose?

You must know yourself before you can know the ‘enemy’

Despite the ridiculous amount of money that has been poured into the beast-man, otherwise known as the military industrial complex, the west is increasingly finding itself growing weaker and weaker against its said ‘enemy’.

So what are the ‘good guys’ doing wrong?

Ironically, while the west has been obsessively fantasising over all the things they relish doing to Russia and China when they have finally won this war, Russia and China have decided to actually focus on cooperation and the improvement of their nation states.

In other words, it is because Russia and China HAVE NOT been focused on war as their ultimate priority that their countries have been able to flourish and are prospering.

Here is an example.

Many in the west put anything to do with space, that is, the universe we live in, as the lowest priority on their list and I do mean lowest. There is more excitement and media coverage over a guy who broke the Guinness book of records for how many hot dogs he ate than astronauts going into space.

While the United States has been focused on tearing down its space program, Russia, China and India have been doing the very opposite. If you think the U.S. still has the best space program and will always be best, you may not be aware that American astronauts need to use Soyuz (Russian) rockets to go into space because the Americans shut down their own shuttle program in 2011.

While the U.S. State Department along with European nations, such as Britain, continue to mount a dangerous level of aggression against Russia, American and European astronauts need to fly to Russia so that they can ride in Russian Soyuz rockets to get to the International Space Station.

How boorish and ungracious is that?

That at the same time that there is hardly anything nice ever said about Russia by western politicians and press, these same countries then take for granted what Russia is doing in supporting their space programs. To showcase the grace of the Russians in all of this, Soyuz means ‘union’, and the Russians most evidently see this as a union not just for Russians but an international union.

In addition, the United States has banned any cooperation between American and Chinese astronauts and consequentially banned China from using the International Space Station, which ironically will be shut down by 2024. It was under Barack Obama’s presidency that this ban was implemented in 2011. The Chinese are planning on building a space station before the ISS is obsolete. And I think it is safe to say they will be open to American astronauts boarding their space station, in light of the fact that they have kept an open invitation to the U.S. to join the AIIB and the Belt and Road Initiative.

As a consequence to all the accomplishments Russia and China are making with their space programs, a wave of optimism for the future has swept their populace. Just ask anyone living in these countries what they think of their cosmonauts and taikonauts and they will all tell you the same, that they are heroes and a symbol for hope. When was the last time we in the west felt genuine optimism and hope?

This is a very indicative example of how the west’s priorities have caused themselves to look increasingly inconsequential on the world stage. They have viewed themselves as number one for so long that they really cannot fathom that this could ever change, despite it glaringly staring them in the face. The world is moving forward, no matter how much one beats their chest and stamps their foot, and the longer the tantrum the more time lost and the further back in the line one finds themself.

Increasingly the judge for success on the world stage in the 21st century, has not been shaped by the size of one’s military but rather on the growth of industry and science driver programs.

Warfare in the 21st Century

The majority of tyrants from the ancient times to present day, have always had a network of powerful people behind them (whether they were aware of it or not) that opened up a path for them to sit on the throne so to speak. For example, we now know that there was a very direct support of Hitler coming from the Bank of England amongst other very influential institutions. That is, Hitler did not arise to power ‘naturally’ or by his mere merit.

The desperation of that economic environment in Germany was predictably formulated as a direct consequence of the Treaty of Versailles which was essentially a death sentence to the German people. And Hitler who had started to make a small name for himself was selected and endorsed as the ‘face’ of what had already been decided would be the fate of Germany.

Wars have almost always been the result of funding and organising from powerful groups with geopolitical interests, often of empire, who create an environment of disinformation and desperation amongst the people through economic and military warfare along with color revolutions.

However, once there was the creation of nuclear bombs, geopolitical warfare was changed forever.

Though we still use much of the same old strategies today, war is ever more located on the plane of ideas, and along with this the ever increasing focus on the manipulation of information and the populace’s perspective of who is good and who is bad.

The war that needs to be fought against the present tyranny is thus increasingly a mental war. In the case of the populace, all together they hold more power than they realise. The real crisis of today’s western thinking is that the people have forgotten how to think. Attention spans have gone down drastically along with a functional vocabulary. People are becoming more and more dominated by image based messages rather than content that requires more than a 10 minute attention span. Articles in the news keep getting shorter and shorter because people seemingly cannot be bothered with too much reading. Along with the serious decline in reading in replacement for quick entertainment (more successful than any book burning in history), people no longer bother to work for a comprehensive viewpoint. Information becomes an annoying barrage of ad campaigns, each yelling louder and more frequently than the other.

The solutions to our problems such as the oncoming economic collapse (in case you haven’t noticed we are doing everything the same as pre-2008), have their solutions in what Russia and China are presenting. The initiation of war has almost always been presented as a false ‘necessity’, that is in response to the dominating geopolitical ‘balance’, which is basically meant to service the present system of empire, and the erroneous belief in zero sum game.

However, the idea that humans exist in a zero sum game, doomed to battle forever over a diminishing return of resources, was disproven time and again in modern history through the application of successful principles of national political economy. Notable examples of which include Colbert’s dirigisme of France’s 17th century (later revived during the presidency of Charles De Gaulle), the Hamiltonian system of America as exemplified by Abraham Lincoln’s Greenbacks, FDR’s New Deal, and JFK’s space program as well as its most recent expression of China’s Belt and Road Initiative.

This system understands that fast money is parasitical and acts in direct opposition to the long-term investments required for projects that will revolutionise a nation’s infrastructure, including science-driver programs.

That debt for such long-term projects is not qualitatively the same as the present debt we see accruing today, and that debt towards investing for the future will always yield a higher return than the cost over time. This is why debt towards long-term investment on infrastructure and science driver projects, such as space exploration, will always be sustainable with a massive return quantitatively and qualitatively. Whereas, the gambling of fast money will very predictably lead to a collapse as was clearly indicated by the 2008 financial crisis, and which insanely has yet to be addressed with a serious bank reform.

The higher battle ground is being fought on the plane of ideas and which proposed ‘new system’ will replace the current collapsing one we are presently in. On the one side the hegemonic rule of a one world government who thinks that they can use force and oppression to rule and on the other side a multi-polar system of cooperating nation states committed to progress that will offer a real qualitative return for the future.

The 75th celebration of Elbe Day just occurred on April 25th, this is the day American and Russian soldiers met for the first time in WWII. Their handshake at Elbe River was a symbol for the end of the war against fascism and a strong comradery formed between these men who became united as defenders of liberty. 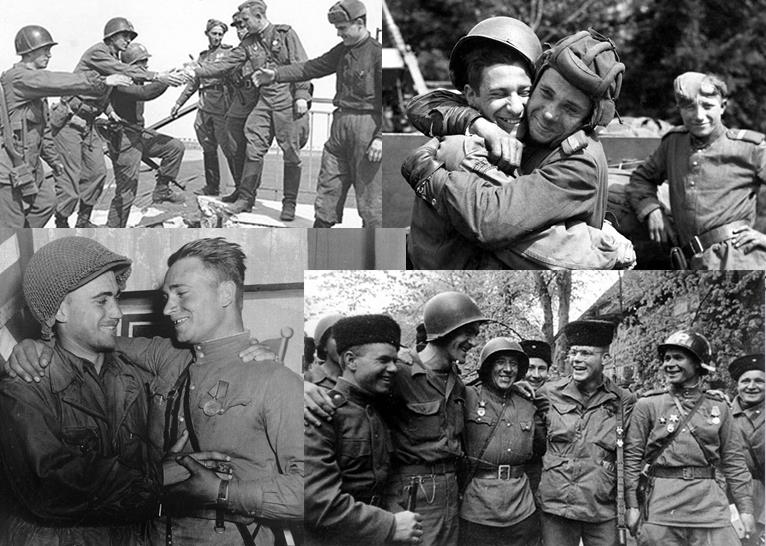