The Grey Zone of Climate Economics

Last fall, a paper came out: The Economics of 1.5°C Climate Change,

annual review of environment and resources, by Dietz, Bowen, Doda, Ghambhir, and Warren.

The economic case for limiting warming to 1.5°C is unclear, due to manifold uncertainties. However, it cannot be ruled out that the 1.5°C target passes a cost-benefit test. Costs are almost certainly high: The median global carbon price in 1.5°C scenarios implemented by various energy models is more than US$100 per metric ton of CO2 in 2020, for example. Benefits estimates range from much lower than this to much higher. Some of these uncertainties may reduce in the future, raising the question of how to hedge in the near term. Maintaining an option on limiting warming to 1.5°C means targeting it now. Setting off with higher emissions will make 1.5°C unattainable quickly without recourse to expensive large-scale carbon dioxide removal (CDR), or solar radiation management (SRM), which can be cheap but poses ambiguous risks society seems unwilling to take. Carbon pricing could reduce mitigation costs substantially compared with ramping up the current patchwork of regulatory instruments. Nonetheless, a mix of policies is justified and technology-specific approaches may be required. It is particularly important to step up mitigation finance to developing countries, where emissions abatement is relatively cheap.

The paper makes several conclusions. It admits there is no clear answer regarding the economic costs and [in particular] benefits of whether or not the 1.5°C target passes a cost-benefit analysis. It claims that the benefits of limiting warming to 1.5°C, compared with 2°C, are very significant for natural ecosystems and significant for water resources, agriculture, and human health, especially in poorer regions. Evidence suggests limiting warming to 1.5°C reduces the risk of crossing climate tipping points, like the melting of the Greenland and Antarctic ice sheets, however, the reduction in risk of these events cannot presently be quantified. The global economy would need to be de-carbonized at an unprecedented rate to stay within the 1.5°C objective, likely entailing large costs and huge reductions in energy demand across the whole economy and heavy reliance on negative emissions technologies, principally bioenergy with carbon capture & storage (CCS). Delay in pursuing an emissions path consistent with 1.5°C likely renders that objective unreachable via conventional means, instead relying on expensive large-scale carbon dioxide removal (CDR), or risky solar radiation management. Business groups have already showed interest in the latter method. The authors argue that the case for carbon taxation being central to climate change “mitigation” is stronger than ever, but say there’s room for more interventionist policies on top of that. They urge the UNFCCC [United Nations Framework Convention on Climate Change] and Paris process to find speedy ways to channel finance and technology to developing countries and take advantage of “cheap abatement.”

Now, before we dive into the implications, I want to address something. Half a degree of warming may not seem much. Ditto for one more degree added to the global average. But consider this analogy of a person running a fever. When you’re running a fever of 37°C, symptoms are minimal to non-existent. You can walk, you can do work, you have an appetite, you don’t have headaches, you don’t sweat. All that changes if your fever reaches 38°C. Now you’re tired. You’re more sensitive to light. Your appetite is smaller. You have headaches, shivers. You’re sweating. It’s more difficult to stand up and do work. You may feel like throwing up. And as the fever gets higher, these symptoms amplify, new ones develop, and once you reach 40°C, you’re a case for the hospital emergency room. The climate is an open system; and no model [to predict it] is perfect. That being said, it’s beyond question that human civilization must strive to replace antiquated technology with better systems; to become more productive, more efficient, and eco-friendly. We should strive to do more with less, not less with less.

With regard to carbon capture and storage, we need to know how much land this will require, materials necessary for these facilities and relevant equipment, the amount of labor, and electricity. Knowing this, we’re able to determine how much resources we have left for other objectives and functions. And this is the real question, to which we need a clear and definite answer. So we can know for sure what we’re sacrificing, even though it’s unclear what the benefits will be, or if we’ll even be able to identify these benefits and tally them up. The authors of the paper ask the same thing, “Can the reduction in the risk of crossing key tipping points in the global climate system, brought about by limiting warming to 1.5°C, be quantified?”

The Green New Deal touted today didn’t even have climate change in mind. Saikat Chakrabarti, chief of staff to Democratic representative Ocasio-Cortez, confessed to this. “The interesting thing about the Green New Deal is it wasn’t originally a climate thing at all. We really think of it as a how do you change the entire economy thing.”

Even though this research paper claims there’s a strong cost-benefit case for carbon taxation, alongside higher Government interventions to correct market failures, results from the Energy Information Administration’s model on CO2 taxation and emission levels are quite discouraging. A tax of up to $300 per ton dropped emissions 58 percent below 2010 levels, but not until 2050! The model crashed when the tax was hiked past that threshold. At a $300 tax per ton of carbon and associated regulations, a family of four would incur a loss of almost $8,000 per year due to higher energy costs, higher consumer prices, and foregone wages. Over a 20 year period, the total cost is $165,000. During that same time window, the tax would take out an average of 1.1 million jobs per year and diminish GDP by a total of more than $15 trillion. It’s obvious why the so-called Green New Deal gathers a lot of criticism from people of various persuasions, including those who believe in man-made climate change. Realistically speaking, just to keep the present rate of warming, a 60 to 80 percent cut in emissions worldwide would be required; and it would still take decades for the atmospheric concentration of CO2 to stabilize.

Given the impotency of CO2 reduction on climate change, I find the emphasis put on carbon taxation rather exaggerated – especially when invoked as a way to “raise revenue” for investment in renewables [see Taxes for Revenue are Obsolete by Beardsley Ruml, 1946]. Meanwhile, other elements contribute to pollution, and they hardly get enough air time. Things like chromium, industrial waste water, pesticides, sulphur dioxide, mercury, asbestos, arsenic, cadmium, lead pollution etc. These substances infiltrate our water, air, and soil; cause cancer, birth defects, asthma, emphysema, bronchitis, brain damage, and other nasty things. More so, many supporters of a carbon tax say that revenue from this tax should be distributed to the people as a social dividend. However, this creates a perverse effect/incentive, in which people hope for higher revenue [aka. more CO2 being produced] in order to receive a higher dividend. And, of course, CO2 taxation translates into higher prices, disproportionately hitting the lower income brackets – who, ironically, produce the least amount of lifestyle emissions.

Last, but not least, in spite of being a research paper on economics, land prices and the word rent aren’t mentioned at all. All of this huge investment [state and private] in buildings and infrastructure is going to be a major free lunch for money lenders and landlords, at the expense of labor and capital. To talk about “market failures” without addressing the issue of economic rent is an exercise in futility and ignorance. The classical economists understood that in order for markets to function well, they had to be free of the rentier elements. In a rentier market/finance capitalism, however, economic agents – be they state, private, or quasi – operate in a pernicious and distorted environment. And socialist policies, which leave economic rents uncaptured, deliver sub-optimal results and are destined to fail. The same goes for libertarian policies.

Things would be so, so different today had countries in the 20th century fully embraced industrial capitalism and eliminated rent-seeking, with everything it entails. Today’s prices would be derived from value, instead of value being derived from prices. Free of the rentier excess charge [in the form of rent, interest, patents, lobbying, and cartelization], the cost of production would have gone down and down, due to leaps in science and technology: lower input, faster throughput, higher output. We would have had the greatest economic growth in history [value creation] accompanied by the greatest price deflation in history, with the highest incomes in history.

At any rate, without a clear picture on costs vs benefits, without eliminating much of the surrounding mysteries of so-called climate change mitigation, without a way to quantify it… efforts are going to be sporadic and large sections of public opinion will remain unconvinced. A recent YouGov survey makes this clear. Note the phrasing “human activity is mainly responsible” for climate change. 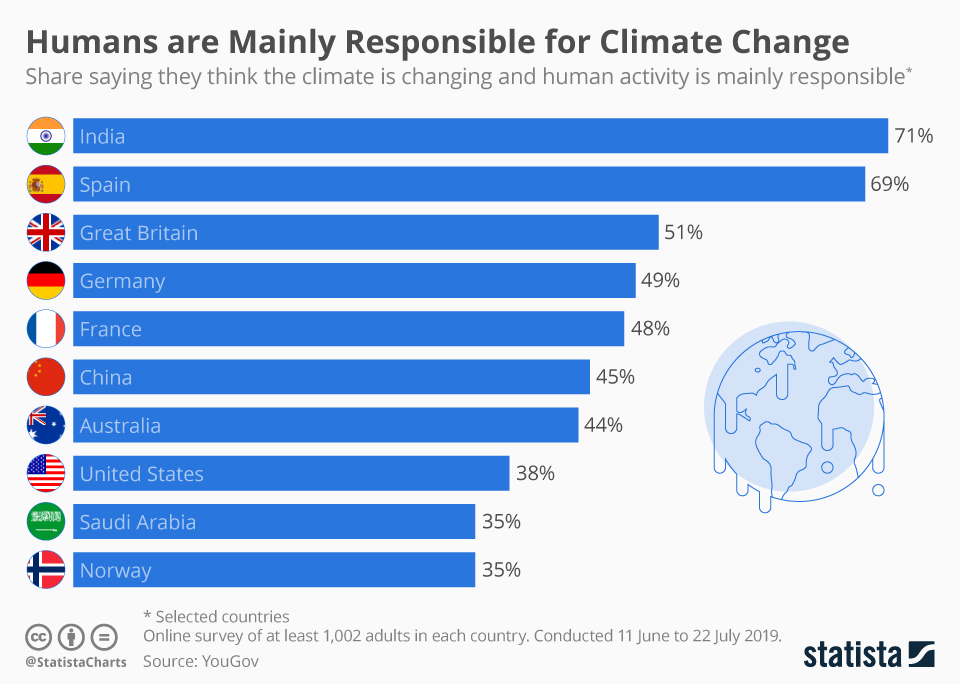