The Lockdown in the West Also Comes From China 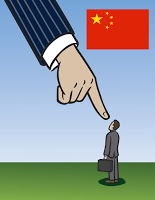 Had it started in almost any other place on Earth, the Western policies might have been milder and more respectful of fundamental human freedoms. During the 2009 Swine flu pandemic, for instance, no lockdown of society was even contemplated, although that virus contaminated almost a billion people and killed hundreds of thousands globally. But that pandemic started in the West, not in China.

Though most governments in the West have progressively over the last century gained ever more control over people’s lives, there is a Western tradition, though some would call it a pretense, of valuing individual freedom. If such an ideal still means anything at all, no natural disaster, no matter how serious, would be reason enough to make an exception and allow the State to dramatically curtail the basic freedom of millions of citizens to go about their business, as long as their respect the law. In fact, if a pandemic were so dangerous as to threaten to wipe out a substantial part of humanity, no government directives would be necessary anyway, in order for panicked individuals to restrict their movements and self-isolate, to wear masks and to practice “social distancing”, provided such measures could evidently limit contagion. Many people would then naturally take such actions by themselves, without any central State with a bullhorn telling them what to do.

But the Covid-19 is not that dangerous by far. Its harmfulness to the entire population has been wildly exaggerated, though its impact to healthcare systems is real. The Western governments’ willingness to do anything, however devastating to the economy, in order to “flatten the curve“, must then be seen as a way for politicians to belatedly cover themselves, at the expense of society as a whole; to avoid the political blowback from the mostly public healthcare systems’ incapability of handling a severe flu pandemic. Indeed, the Covid-19 mortality rate has been shown in both China and Italy to largely depend on the availability of Intensive Care Units (ICUs), making the reaction to the pandemic a political and economic question, not a health one.

An imaginary government that would be both economically responsible and constitutionally bound to respect individual liberty, would have neither the will nor the possibility of imposing confinement, Chinese-style forced isolation, or any other such harsh measures on the entire population. Yet, such a government would still have had many other measures at its disposal. It could have taken emergency actions to increase the capacity of ICUs by the time it was clear that the Coronavirus was going to spread outside of China. The elderly could have been given early advice about ways to protect themselves. Visits to state-funded retirement homes could legitimately have been regulated early on. The scandalous lack of protective masks could have addressed early on, and faulty recommendations for using them rapidly corrected. Virus testing capability could have been developed.

Of course, even if all such measures had been taken, Covid-19 would still have had a significant impact on healthcare systems in the West, and perhaps more so than in China. But Western society must rid itself of the erroneous but pervasive idea that the bloated and inefficient taxpayer-funded welfare state could and should protect against any and all ills that can befall mankind. This has never and will never be true. Hopefully, this pandemic will at least have the benefit of hammering this point home to statists and left-wing interventionists of all kinds.

But even such politically mild and obvious measures as those available to the imaginary government above were not taken by the real Western governments, largely because of incompetence. Instead, in January 2020 Western politicians, bureaucrats and mainstream media just stood by and watched with fascination as the Coronavirus spread in China and how entire cities, like Wuhan, were completely locked down, on orders from the central government, along with a host of other authoritarian policies.

These typically radical Chinese policies must have given more than a hint to Western decision-makers about the way to tackle the pandemic. Indeed, it has been clear for some time that many Western politicians and pundits have envied the Chinese State’s way of “managing” its population. How they admired China’s political system during the 2008-2010 financial crisis, when they saw the ease with which the Chinese State could implement whatever economic policy it wanted, without having to be subjected to any kind of media criticism or popular dissent.

But they forgot that China is not the West. China has no tradition or experience either of democracy, political freedom, or human rights. Though China today has implemented a kind of market economy, ironically with more success than many of the heavily taxed and heavily regulated Western nations, politically China remains a Communist dictatorship. Its success these last decades has come largely thanks to its resilient, trade-minded and hard-working population, once Beijing let go of its central planning stranglehold. The Chinese know their government; they respect it and fear it. They have fully understood that their social contract consists in being allowed to make money in a quasi-capitalist system, as long as they strictly obey the government and don’t meddle in politics.

Many in the West have forgotten that today’s China government is based on Mao Zedong’s Communist Revolutionary Army. After winning the long and brutal civil war in 1949, it imposed on the Chinese people a martial, ascetic, nationalistic and peasant culture of sacrifice for the general welfare and greatness of China, which is still called upon in national crises like the Coronavirus pandemic. The current Chinese government is the same that engineered the Great Leap Forward and sparked the Culture Revolution, both periods leading to the deaths of tens of millions and immeasurable suffering and grinding poverty for the majority of the Chinese people.

It is the same government that shot down thousands of innocent protesters in Tiananmen Square 30 years ago, and probably would not hesitate to do so again in Hong Kong today if it would work. Currently, this same government is implementing an Orwellian mass surveillance system of the entire Chinese population using cameras, drones, big data and artificial intelligence – a system that was put to good use during the recent lockdown. And it seems increasingly clear that during the early phases of the virus outbreak, the Chinese government misinformed, covered up, and lied to the public about the Coronavirus. In sum, a government with such a horrendous record of crimes against its own people naturally has no issue ordering the Chinese to do whatever it believes necessary, regardless of the consequences, whether social or economic.

The fact that the measures of the authoritarian Chinese government have been so easily emulated by Western governments, should be shocking and worrying to all lovers of freedom. It shows just how far the West has drifted away from the prevailing Classical Liberalism of the late 19th century. If Western governments cannot remember the nature of the Chinese regime and if, by this lockdown, they are now scrapping the little that still remains of the Western respect for individual freedom, then the people must reject their governments, and even resist them by force if necessary. Everyone must remember that all political power rests firstly on public consent.