The Louvre Removes, Tapes Over Name Of Opioid-Profiteering Donor Family

Prestigious Paris art museum the Louvre has removed or taped over the name of opioid-profiteering donor family the Sacklers, which has been the namesake of one of its wings since 1997.

Museum guard Sophie Aguirre said Wednesday that the plaque for the Sackler Wing of Oriental Antiquities was taken down on July 8 or 9 while the wing was closed to visitors, reported The New York Times.

The plaque acknowledged the Sacklers’ donations to the Louvre, and roughly 10 signs with the family name have been taped over or removed throughout the museum. Even references to “the Sackler Wing” on the Louvre’s website are gone, reported The NYT. (RELATED: EXCLUSIVE: New Info About Opioid-Profiteering Family Pushes Largest Museum In US To Rethink Gift Acceptance Policies)

The Louvre is the first major museum to remove the Sackler name after new information that family members headed a deceit campaign to push the highly addictive prescription opioid OxyContin.

Other museums around the world have reacted to the information as well. The largest museum in the U.S., the Metropolitan Museum of Art, announced on May 15 it will stop accepting gifts from members of the Sackler family still associated with Purdue Pharma. Other museums, like the Smithsonian Institution have not removed the Sackler name and cite legal reasons, according to The NYT.

The Louvre’s President Jean-Luc Martinez said Tuesday on French radio that the Sackler name vanished because of museum policy that naming rights last 20 years. Museum spokeswoman Nadia Refsi did not respond to The NYT’s queries about why the change did not come in 2013, since the name dates back to 1993, the paper reported. 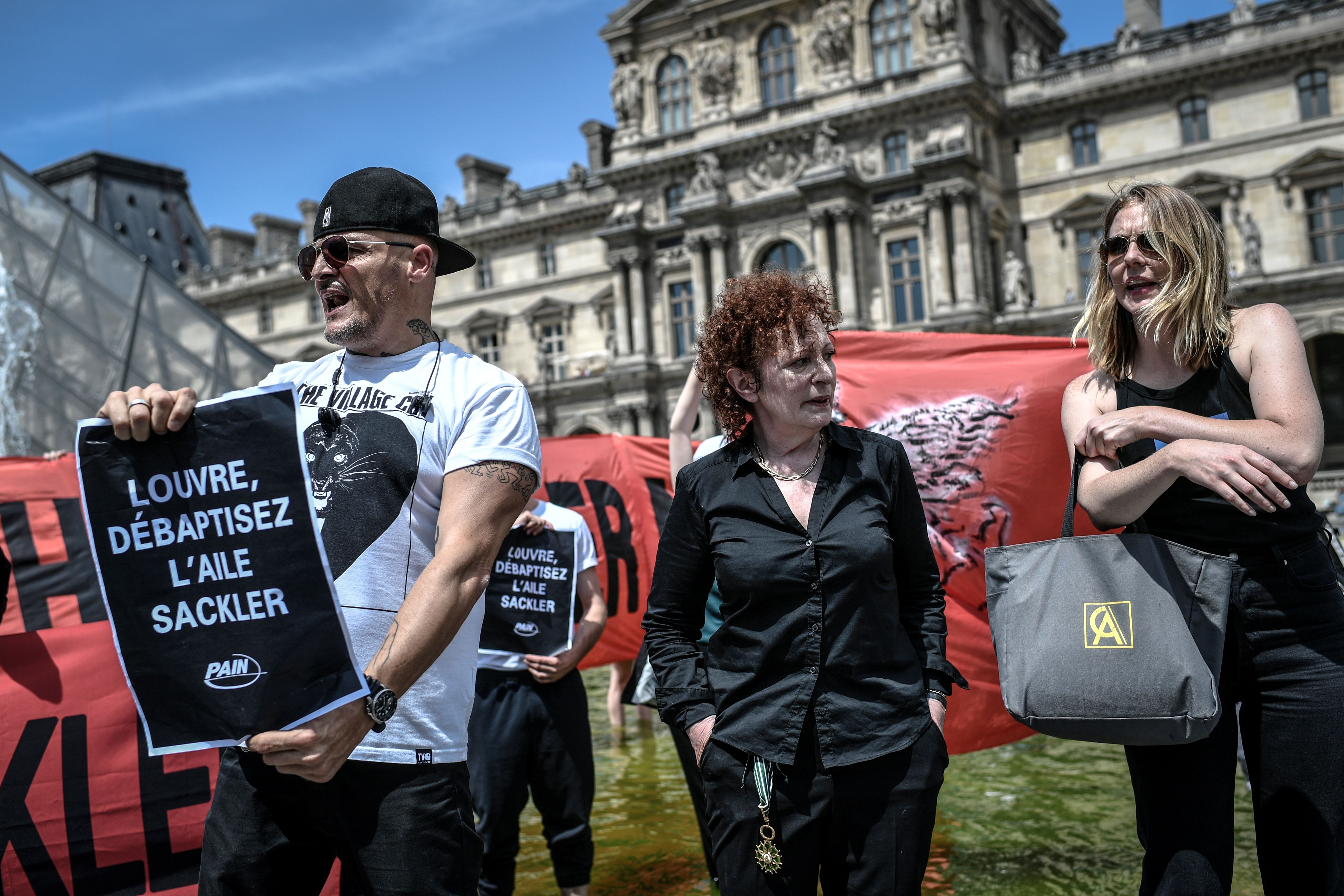 Nancy Goldin (C), photographer and founder of P.A.I.N. (Prescription Addiction Intervention Now) association – created to respond to the opioid crisis – and Fred Bladou (L), mission head of French NGO Aides, take part in a protest on July 1, 2019 in front of the Louvre museum in Paris, to condemn the museum’s ties with the Sackler family, billionaire donors accused of pushing to sell a highly addictive painkiller blamed for tens of thousands of deaths. (STEPHANE DE SAKUTIN/AFP/Getty Images)

“Museums and cultural institutions must maintain their integrity,” PAIN said in a statement Wednesday, according to The NYT. “They should not bear the name that is synonymous with the opioid crisis. Our museums belong to the artists and to the public, not to the donors.”