The Second American Civil War has a geographical dividing line rather different than the first Civil War did. The Mason-Dixon Line was a figurative reference for a long geographical border separating the Slave States from the Union States (a.k.a. “Free States” even though they were not exactly free). The boundary is show on maps and is easy to find. It is essentially a line running east-west across most of the territory now occupied by the Lower 48 US states. But the geographical divisions for this new war should be all circles, drawn around most of our large cities.

Everywhere we see dark blue, that is an American city. And most of these are run by a Democrat monopoly or strong majority. Note that this is true even in very “red” states like Alabama, Tennessee, Texas, and Kentucky. Most urban areas in the US are run by Democrat governments. Only Colorado Springs, Colorado, Cheyenne, Wyoming and Boise, Idaho seem to not be part of this pattern.

Now look at this map showing where the violence has been in the last twenty years. The red dots are “violence over police action”, of particular interest in our current situation: 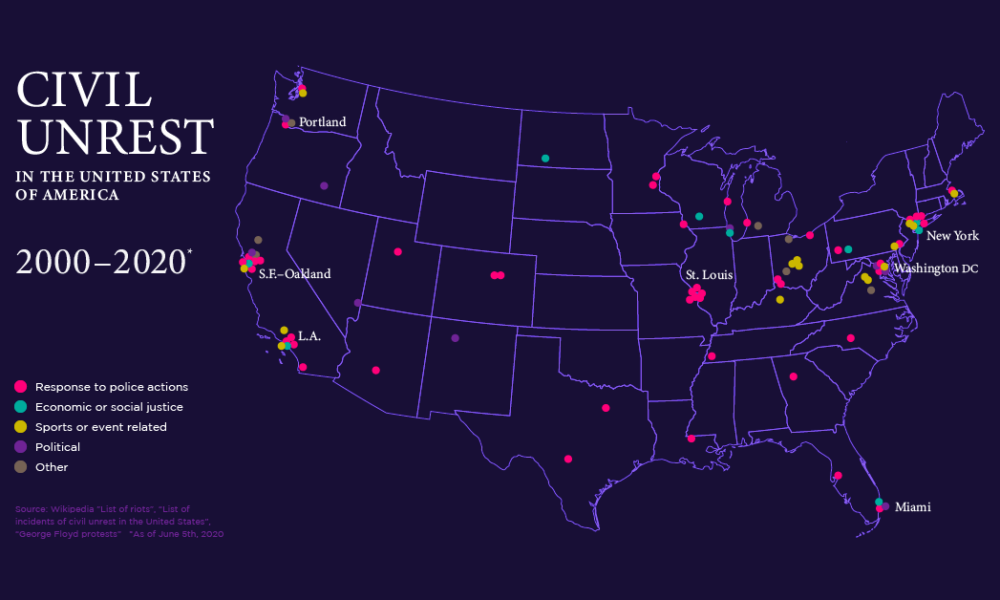 Rush Limbaugh opined that probably half of them are college-educated white women.

RUSH: Grab audio sound bite number one. I’m gonna find as much evidence as I can. I’ve been trying to tell everybody: It’s white, Millennial, college-educated women that are actually promoting, running this whole Black Lives Matter movement. Not to say that Black Lives Matter doesn’t have its own leadership; it does. But they wouldn’t be halfway down the road they’re down if it weren’t for wealthy, white, Millennial, college-educated women — and here’s an example.

This is a video — well, the audio of it — of an unidentified reporter talking to a white Millennial woman who is simply yelling at black police officers in Washington’s Black Lives Matter Plaza. This woman is insanely angry. We’ve had to bleep the F-bomb out of what she was screaming. She’s obviously in her twenties or thirties, and she’s just livid, and she’s yelling at a line of black police officers…

…It’s a testament to what you can do with a skull full of mush — an uneducated, unflaked, and unformed human brain.

And here, Mr. Limbaugh notes the same thing. An uneducated, unflaked and unformed human brain, yet the woman is of adult age. This is also a phenomenon that is become rampant across many American universities, which are also usually in large cities. We saw this begin to rise thirty years ago when the criteria for young people who wanted to enter universities were concerned with which school was the best party school. It used to be that university education was strictly for those people who wanted to study advanced topics beyond that which was needed for professional work. But now, universities are no longer trustworthy institutes of higher learning, at least this is true for liberal arts programs in a great many such schools across the US, Canada and Western Europe. Limbaugh further comments:

But look at what they’ve achieved. Look at how they have totally co-opted the American university, they’ve co-opted Millennial women.

And again millennials are almost exclusively urbanites. The young people who have a passion for agriculture and farming are far less interested in Marxist redistribution of wealth and “fair” economic and social theory. The reason is simple: in their line of work such conditions do not exist and cannot exist.

It is not possible to demand that rain fall in a fair amount across everyone’s cropland. It is not possible to wish away hailstorms or tornadoes. It is equally absurd to make demands that a cold snap does not happen during the time when your trees are in blossom. Cattle can get sick, they can drift for fifty or one hundred miles in a blizzard, get struck by lightning or disease. In nature, anything can happen, and it usually does. The life of a rural resident, especially a farmer or rancher, is based in this reality. The farmer or rancher’s intellect often exceeds city dwellers, and farmers deal with reality that cities do not. Consider Victor Davis Hansen, who worked for several years as a farmer before emerging into public life as a renowned author and historian. His work invariably ties agriculture and war together. Classically educated, his viewpoint is historically realistic and he stands apart from the socially fashionable “theories” of “revolution” that our urbanized liberals so easily ascribe to.

The outcome of this Civil War is assured… or is it?

We say “all but assured” because we simply must take into account the fact that the force behind the radical leftists is extremely great. Logically, their ideology has no chance. It could be cut off in a matter of weeks or even days, were the food suppliers to simply stop delivering food to the cities where these people are active, and if store owners were to stop selling their wares to leftist radicals. It is probably somewhat easier to identify such people presently because of the nature of the rioting taking place.

However, I found a disturbing parallel.

In my first piece in this series, I identified not two, but four groups that are the conflicting parties in the Second American Civil War. This identification was not based on sociological or historical research; it was based on simple observation of people I know across the US, and the character and nature of the news coverage in the country.

However, the Russians had an extremely destructive Civil War of their own, after the abdication of Tsar Nicholas II, and that war took between ten and thirty million lives. This was before the further loss of twenty-seven million souls in the Great Patriotic War (a.k.a. WWII).

Like the present civil war in America, there were at least four groups involved. Wikipedia gives a synopsis:

The Russian Civil War (Russian: Гражданская война в России, tr. Grazhdanskaya voyna v Rossii) was a multi-party civil war in the former Russian Empire immediately after the two Russian Revolutions of 1917, as many factions vied to determine Russia’s political future. The two largest combatant groups were the Red Army, fighting for the Bolshevik form of socialism led by Vladimir Lenin, and the loosely allied forces known as the White Army, which included diverse interests favouring political monarchism, capitalism and social democracy, each with democratic and anti-democratic variants.

We could liken the “Blues”, (as described in my piece, comprising the hard leftists / BLM / Antifa) to Lenin’s Red Army: having great power, great sympathy from the press, which is itself radical leftist in nature. We may similarly liken the White Army to our “Averages”, “USA Conservatives” and “Traditionalists”, three groups that share common aspects, but who are disorganized and who appear at present to be quite weak.

The Blues have the urban areas firmly in their grip. The other three groups do not, but they do have the rural people, the farmers, and most of the people who actually manufacture things in the US. There is a lot of power in this group; in fact, were it to be organized, the Blues could be shut down completely by the other groups in less than a day.

But will this happen? It is honestly difficult to predict. The leadership and the message are there, and so is the sentiment of these people, who above all want to be left alone and not disturbed or disrupted in their lifestyles by the radical Left. But wishing does not make it so, and this is a war.

This need to draw the sides opposing the Blues is probably why President Trump’s first Independence Day speech this year took place in extremely conservative South Dakota, at Mount Rushmore.

Will the American nation find its way to defeat the Left and get back on its feet? I hope so, but honestly, I do not know.

That is up to all of us in the rural camp. But one thing does help us. The radical left this time is far more radical than Lenin’s Red Army was. Even before there is a chance at a clear victory for them, they are already attacking their own. The video clip below shows how true this is, and since this was made we have seen much more: the killing of an innocent eight-year-old girl in Atlanta over the July 4th weekend, hundreds of other shootings and dozens of people dead in many cities, most of whom are supposed to be “the oppressed” people themselves. The Blues are tremendously self-destructive, but their power is also so great that they may still win through.

If that happens, it will be the end of the United States, and the beginning of a very dark period of history, whose ultimate outcome is unknown.