The Trendy Anti-Israel BDS Movement Has Been A Massive Failure

When Israel announced that U.S. Congresswomen Ilhan Omar and Rashida Tlaib would not be allowed to enter Israel, it cited their involvement in the BDS (“Boycott, Divestment, and Sanctions”) movement. And indeed, the fifteen-year-old BDS movement has become the primary battleground on which Palestinian-Israeli conflicts are fought today.

But here’s what nobody’s talking about: BDS has been a massive failure.

The movement, which models itself on the global anti-apartheid movement of the 1980s that helped take down South Africa’s racist government, has accomplished virtually none of its goals. 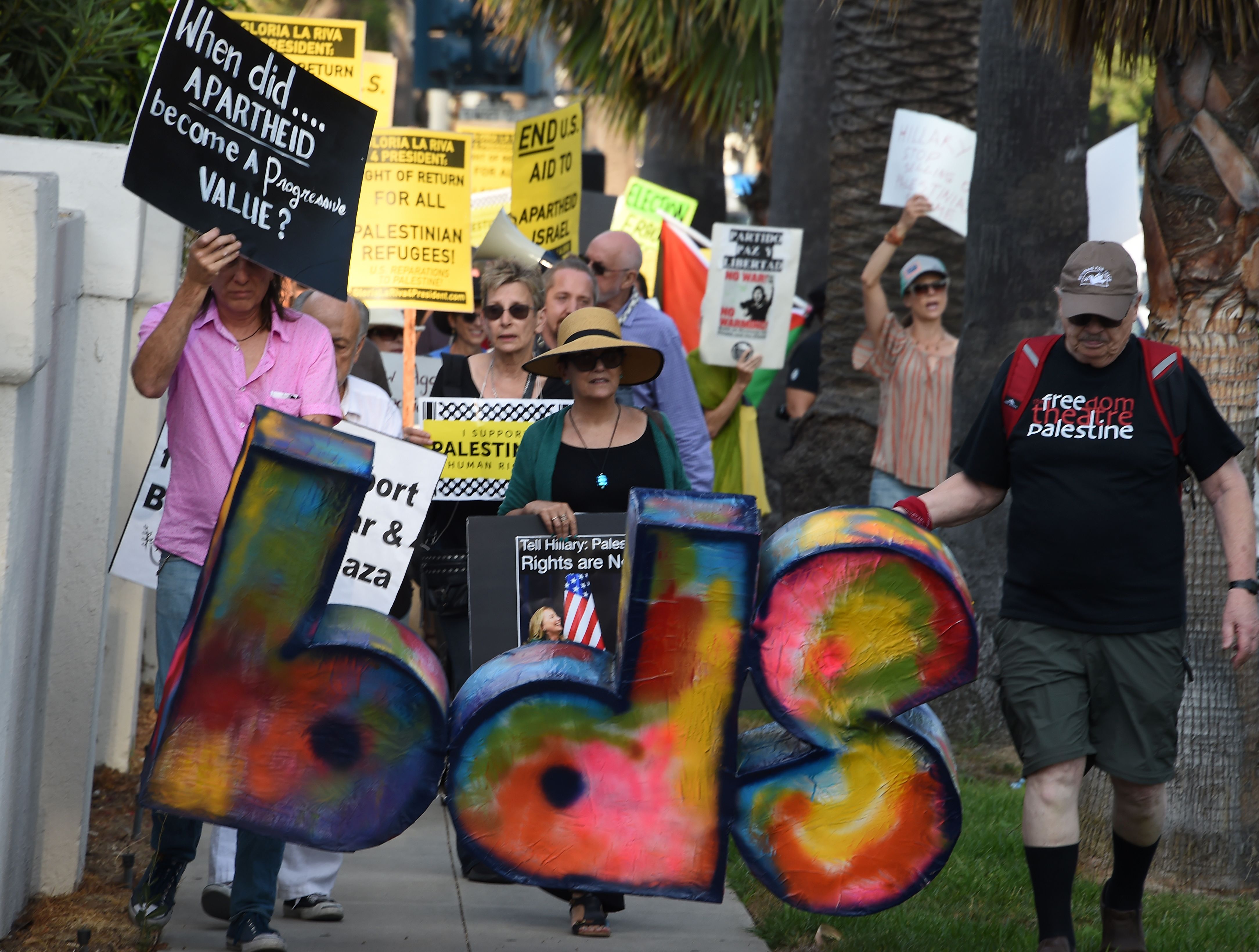 Pro-Palestinian demonstrators carrying a sign reading “DBS” (Divestment, Boycott, and Sanctions) march against US aid to Israel and Democratic presidential candidate Hillary Clinton during a nearby fundraiser for Clinton at the home of billionaire Haim Saban, August 22, 2016 in Beverly Hills, California.
Clinton is holding fundraisers in the Los Angeles and San Francisco areas through August 24th before heading to Reno, Nevada to campaign on August 25th. / AFP / Robyn Beck (Photo credit should read ROBYN BECK/AFP/Getty Images)

For example, during the anti-apartheid campaign 26 states, 90 cities, and countless universities pulled out their investments from companies doing business with South Africa. By contrast, BDS boasts of very few successes in its divestment campaign. The best example Wikipedia could find of a divestor is the Luxembourg state pension fund.

But even the few successes of divestment BDS has secured have been divestment from Israeli companies themselves – a far more modest achievement than divestment from any global company that does business in Israel. (RELATED: Tlaib Compares BDS Movement Against Israel To Americans Boycotting Nazi Germany)

And pardon the pun, but BDS without the D for Divestment is just, well, BS.

The only significant American company to participate in the boycott, Airbnb, never actually took down any of its listings in the West Bank, and quietly reversed itself five months after it tried to join the boycott.

The main businesses BDS has targeted for consumer boycotts are thriving. Sabra (a hummus brand whose moniker is what Israeli natives call themselves) has a 60 percent market share. And in just the last few years, Ahava skin products was acquired by Chinese conglomerate Fosun for $77 million and SodaStream was acquired by Pepsi for a whopping $3.2 billion.

Israel’s economy itself is booming. Between the start of BDS and today, Israel’s GDP has doubled and foreign investment has tripled. And the Israeli shekel is the only global currency to have strengthened significantly against the dollar in 2019. 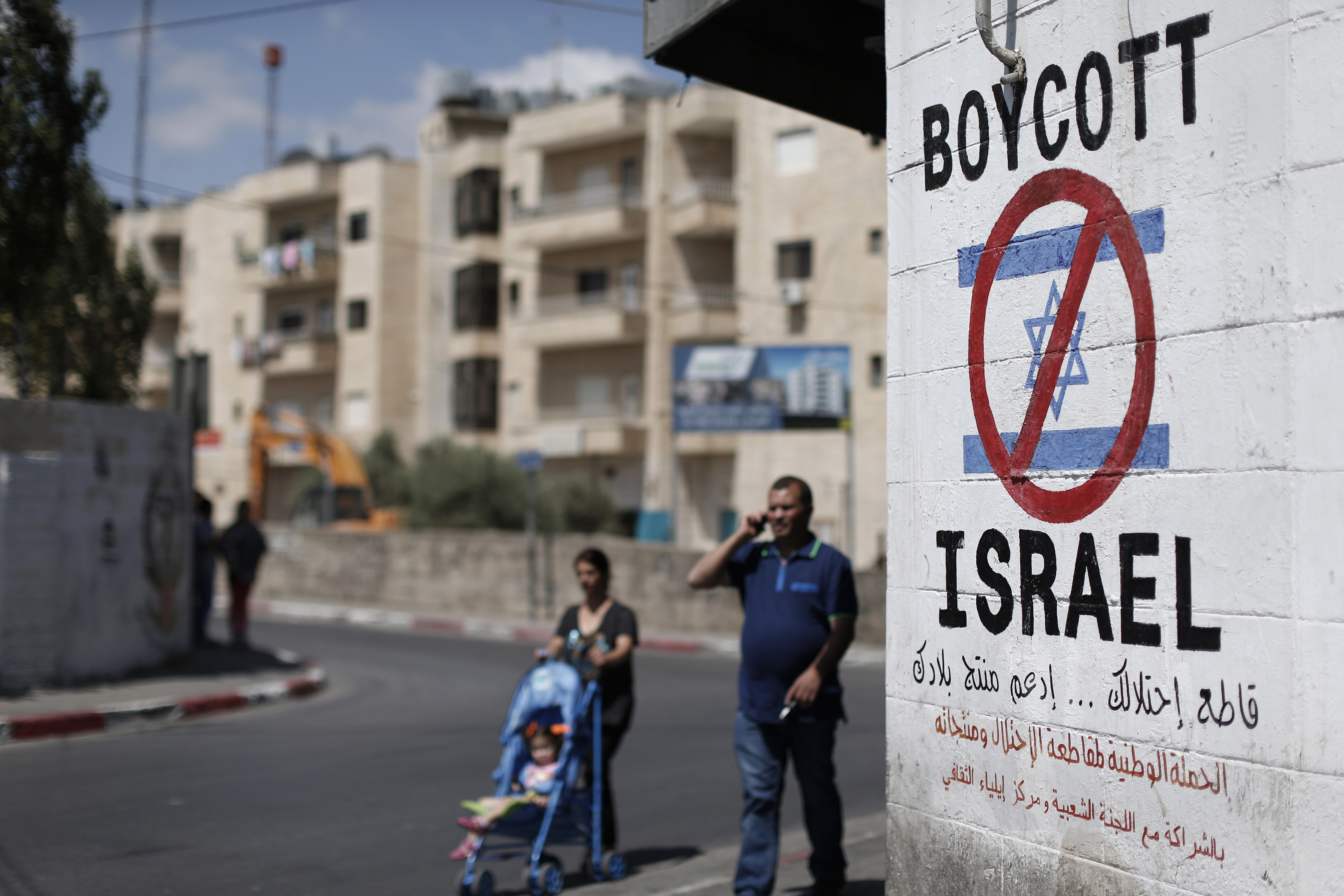 Palestinians walk past a sign painted on a wall in the West Bank biblical town of Bethlehem on June 5, 2015, calling to boycott Israeli products coming from Jewish settlements. The international BDS (boycott, divestment and sanctions) campaign, that pushes for a ban on Israeli products, aims to exert political and economic pressure over Israel’s occupation of the Palestinian territories in a bid to repeat the success of the campaign which ended apartheid in South Africa. AFP PHOTO / THOMAS COEX (Photo credit should read THOMAS COEX/AFP/Getty Images)

Meanwhile, BDS supporters like to point to boycotts by the American Studies Association, the Norwegion trade union Fagforbundet (yeah, that’s its name), and decades-long Israel detractor Roger Waters as examples of their major successes.

So why does everyone keep talking about BDS?

Well, BDS has become everyone’s tidy stalking horse in the messy Palestinian-Israeli conflict. (A “stalking horse” is something used as a decoy or distraction to disguise someone’s real intentions.)

By talking about boycotts and divestments, Palestinians and their supporters can hope nobody notices (and everyone forgets) their longstanding goal of destroying the Jewish state. It’s a lot easier for Rashida Tlaib to justify economic steps against Israel than to openly ally herself with the genocidal terrorists who are, in fact, her allies in this conflict. (RELATED: Anti-Israel Boycott Movement Exposes Schism Within The Squad, And The Democratic Party)

Rockets from Gaza raining on Israeli civilians? Don’t look over there; get your church to stop investing in Israeli companies.

But BDS has been useful for Israelis and their supporters, too.

Right-wing Zionists can deflect questions about the difficult conditions for Palestinians in the disputed territories and the Biblical expansionism of Israel’s settler population. When such topics come up, they can change the subject by claiming that BDS is anti-Semitic (which it is) and unfairly singles out Israel over other countries with far worse human rights records (which it does).

And left-wing Zionists can gloss over their often-naïve and dangerous enthusiasm for a peace process that so far has made things worse. American left-wing Israel sympathizers like J Street can insist “But we’re against BDS!” all the while supporting policies like the Iran deal that put Israel at risk. (J Street even endorsed and helped fund Rashida Tlaib’s primary campaign, only to have to withdraw their support when she reversed her support for a two-state solution and aid to Israel.)

Some of the economic ill-treatment Israel faces that BDS takes credit for existed long before the movement was founded. And while BDS has created a rallying cry on college campuses, among cultural figures, and even in the halls of Congress, that only underscores my point. A movement of “let’s dismantle the Jewish state” (which is what Palestinians and their supporters really want) would not gain the trendy cachet of a boycott movement.

For decades, the American left has been plagued by a “Phantom Selma Syndrome” in which Democrats desperately seek something to march for, even if what they find is intellectually and morally vacuous. BDS supporters can bask in the fading light of the old anti-apartheid movement by refusing to eat Israeli hummus all they want, but the rot in Palestinian society that would make a peaceful Palestinian state a dubious reality is not going away.

And Israelis and their supporters can continue to beat the drum about the unfairness of the boycott without looking at any modifications to the status quo that might relieve the distress of everyday Palestinians.

Or everyone can just admit that BDS is a grand, failed distraction and get back to figuring out a future for the region shared by both peoples that everyone can live with.