As many as 18 women and children were killed in an apparent tribal attack in Papua New Guinea Monday morning.

Assailants massacred the small village of Karida, located in Hela Province, in the latest phase of tribal violence in the region.

“It was retaliation of a previous attack … it was a very sudden attack,” Philip Undialu, the governor of Hela Province, told Reuters.

Undialu believes the murdered women and children had sheltered victims during a previous outbreak of violence and that is why they were targeted, Reuters reported. In total, 24 people have recently been killed due to tribal tensions in the region.

Two of the victims were pregnant, and the ages of the slain children range from one to 15-years-old. 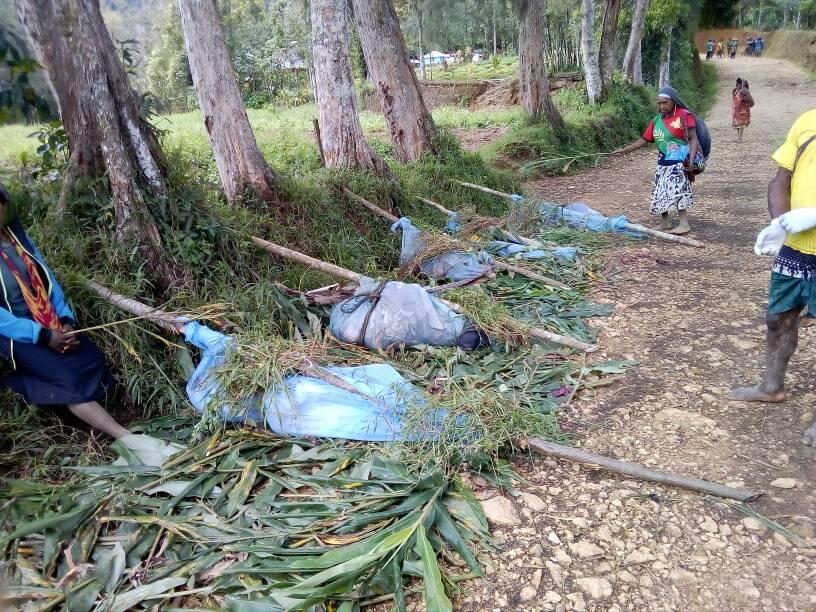 (Public Facebook photo taken by local official of bodies being prepared for transport out of the village).

The attackers used both guns and knives, hacking some of the victims beyond recognition, according to local officials.

“They were cut into pieces. Some had body parts we couldn’t recognise which one is which one, only the faces we can recognise, but legs, hands …” said Philip Pimua, an officer in Karida’s health center, according to The Guardian.

Pimua confirmed the massacre’s connection to tribal violence, revealing that the attack came from “enemies” who “have fought for a long time there.” However, the exact identity of the assailants is currently unknown. (RELATED : 66 Shot, 6 Dead After Chicago 4th of July Weekend Shooting Sprees : Police)

Acting Police Commissioner Francis Tokura described the killings as an “unbelievable, unthinkable and atrocious criminal act that must be dealt with swiftly and severely,” according to CNN.

Tokura also revealed that a team of 30 soldiers and policemen has already been created “to stop any further violence and capture the killers.”

Prime Minister James Marape bemoaned the lack of resources in the region, writing that it is impossible for “a province of 400,000 people to function with policing law and order with under 60 policemen …” in a Facebook post Tuesday.

Indeed, the tribal unrest led ExxonMobil Corp, which owns a natural gas processing plant in Hela province, to stop construction on a pipeline in 2019, Reuters reported.

Marape concluded he statement by condemning the massacre, “to all who have guns and kill and hide behind the mask of community…I am not afraid to use strongest measures in law on you … I am coming for you.”