US & Russia work together to end conflict in Syria (Video)

The Duran’s Alex Christoforou and Editor-in-Chief Alexander Mercouris examine how the Russian and US military appear to be coordinating their moves in Syria so as to prevent Turkey from moving further into Northern Syria, while using diplomacy to bring the Kurds into the framework of a united Syria.

According to AMN (), Chairman of the US Joint Chiefs of Staff (JCS) Mark Milley and Russian Chief of General Staff Valery Gerasimov held a phone conversation on Monday to discuss the situation in Syria, the JCS press service said.

“The two military leaders exchanged their views on issues of mutual concern in Syria,” the JCS said in a statement. “The two leaders have agreed to keep the specific details of their conversation secret.”

The Russian Defense Ministry issued a similar statement earlier in the day, providing no details as well.

Gerasimov’s previous telephone contact with the newly appointed US official took place on October 2, several days after Milley had taken over as the US top military officer, succeeding US Marine Corps General Joseph Dunford.

The two, according Hayley Sims, a spokeswoman for the Joint Staff, exchanged views on issues of mutual concern and agreed that regular contact were important to promote transparency and avoid mistakes.

“Washington’s in meltdown mode over Trump’s Syria withdrawal and Turkey’s invasion,” independent journalist Rania Khalek observes. This as Trump announced Wednesday that American troops are “largely out” of the area of Turkey’s incursion in northeast Syria.

Meeting with Italy’s president, Trump said  in front of reporters: “If Syria wants to fight to take back their land, that’s up to them and Turkey.” He added, “There’s a lot of sand that they can play with.”

Trump: “The Kurds know how to fight. As I said, they are not angels.” https://t.co/qKUuPxKCvA pic.twitter.com/QyQiDf0M8y

“Syria Is Protecting the Kurds, That’s Good!” the president added, but also said of the Syrian Kurds, “They are no angels, by the way.” This follows statements made earlier in the wake of his ordered troop draw down that local powers should sort it out.

“I wish them all a lot of luck,” he said while speaking of Russia and Syria, and while calling the Turkish incursion against the apparently formerly US-backed Syrian Democratic Forces (SDF) “not our problem”.

Trump: “If Russia wants to get involved with Syria, that is up to them. They have a problem with Turkey… It’s not our border. We shouldn’t be losing lives over it.” https://t.co/qKUuPxKCvA pic.twitter.com/9J7Z86rjhQ

But in a significant first, the president also said that Russia and the Syrian government “hate ISIS more than us”. He said “They can take care of ISIS” and explained.

“Our solders are out of there, they’re totally safe” — Trump added, emphasizing his rationale for his recent controversial decision-making on Syria. 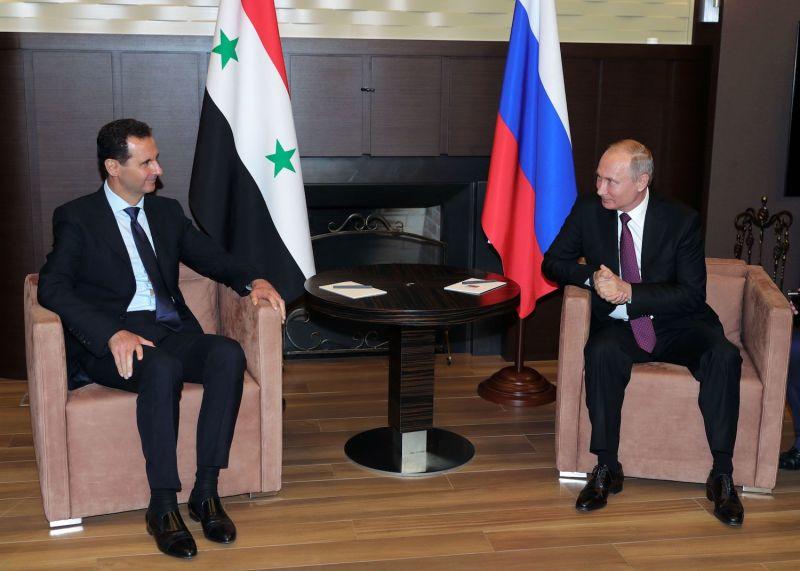 No doubt this will cause mainstream pundits and D.C. beltway think tankers’ heads to explode, given it’s long been a key talking point that without American military presence in Syria, ISIS would only grow and become resurgent.

US pundits & politicians are crying that America’s image & hegemony has taken a hit bc of Trump’s Syria withdrawal. Yes it has. But Trump isn’t the only 1 at fault. You all are.

I explain what’s happening in Syria and how we got here for @IntheNow_tweetpic.twitter.com/pAA4EENhSQ

Worse, a number of hawks have long advanced the conspiracy theory that Assad is actually to blame for the rise of ISIS, and that without regime change in Damascus, ISIS will only grow.

No doubt, Trump’s comments that Russia and Assad will deal with ISIS as they “hate ISIS more than us” will drive collective mainstream outrage. This after, as Rania Khalek aptly noted, “US pundits and politicians are crying that America’s image and hegemony has taken a hit because of Trump’s Syria withdrawal.”