The U.S. Department of State issued a travel warning Monday to Americans, asking them to reconsider visiting China and Hong Kong due to “arbitrary enforcement of local laws.”

The warning added the Chinese government detains individuals to influence Chinese authorities to “resolve civil disputes in favor of PRC citizens” and to gain bargaining power.

“U.S. citizens traveling or residing in China or Hong Kong, may be detained without access to U.S. consular services or information about their alleged crime. U.S. citizens may be subjected to prolonged interrogations and extended detention without due process of law,” the advisory warned.

The advisory also warned that many U.S. citizens only become aware of an exit ban when they try to leave, and many are left without knowing how long the ban will last or play out in court. Further, U.S. citizens may be detained without being informed of their alleged crime and can be detained for sending any private messages criticizing the Chinese government.

The warning cautions citizens to avoid Hong Kong as well, saying the Chinese government “unilaterally and arbitrarily exercises police and security power in Hong Kong” and uses this power to target acts of “collusion” with foreign governments, as well as “subversion” and “terrorism.” 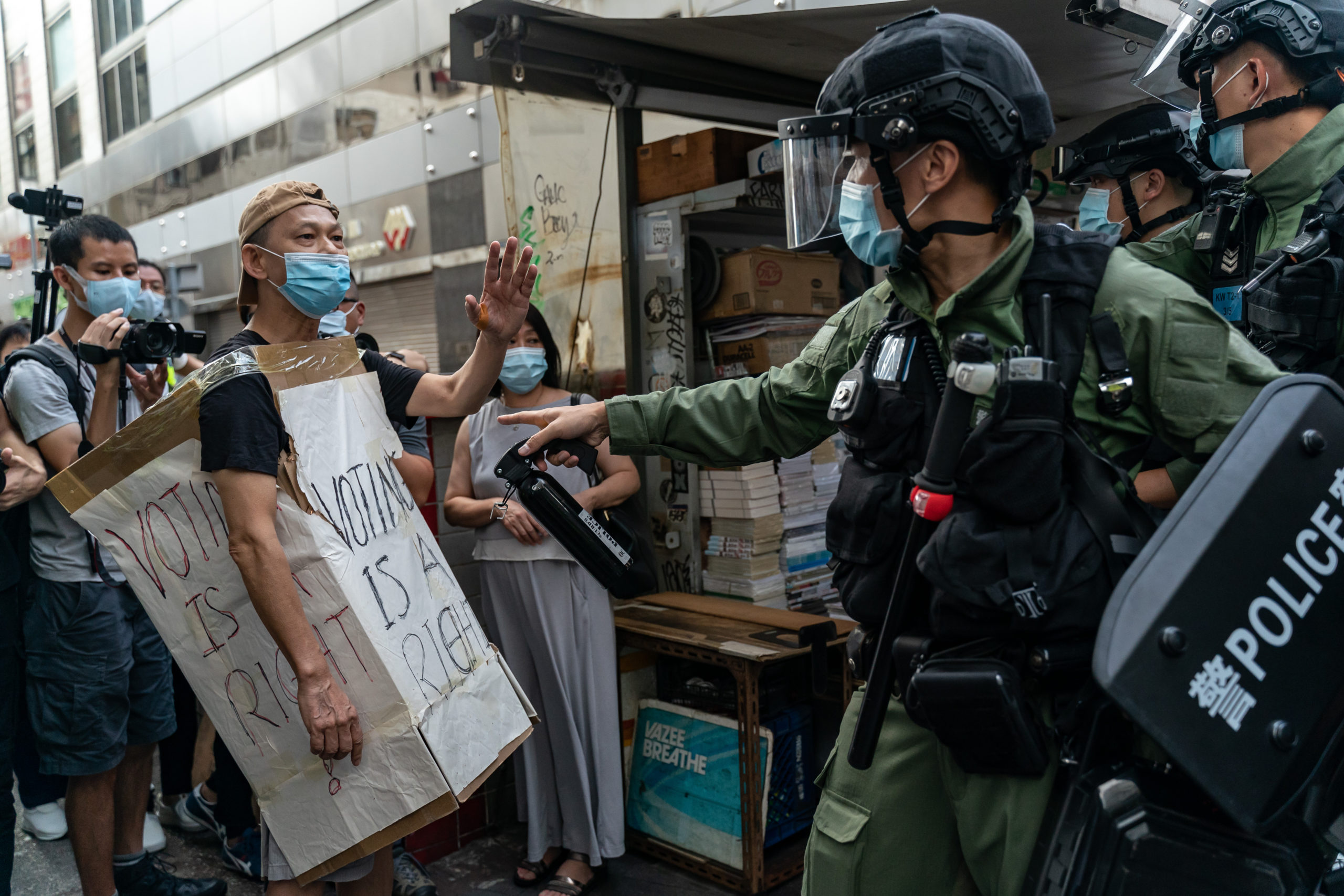 HONG KONG, CHINA – SEPTEMBER 06: A man wearing a Voting Is A Right costume stands off with riot police during an anti-government protest on September 6, 2020 in Hong Kong, China. (Photo by Anthony Kwan/Getty Images)

The Department of State also urged U.S. citizens to avoid any protests in Hong Kong, which “authorities interpret as constituting an act of secession, subversion, terrorism, or collusion with a foreign country” and could result in criminal charges.

Chinese foreign ministry spokesperson Wang Wenbin said the U.S. should “fully respect the facts and should not engage in unwarranted political manipulation,” according to the Associated Press.

“China has always protected the safety and legal rights of foreigners in China in accordance with law. China is one of the safest countries in the world,” Wang said, per the report. “Of course, foreigners in China also have an obligation to abide by Chinese laws.”

The advisory did not offer any new COVID-19 warnings, but directed travelers to previous information about the virus. (RELATED: Nearly 2/3 Of Americans View China Unfavorably As Beijing Officials Blame US For Virus: Poll)

The advisory comes as tensions between Beijing and the United States heat up, after the Trump administration ended three agreements with Hong Kong that covered extradition and tax exemption, citing China’s new national security law that ended Hong Kong’s autonomy, according to the AP.

The U.S. also blocked four companies and a manufacturing facility located in China’s Xinjiang region Monday from shipping any of their products to the U.S, citing China’s suspected use of forced labor.