OrthoChristian.com, the English-language side of the site Pravoslavie.ru, reported that Igumen Pankraty, the Abbot of the great Valaam Monastery, ordered his monks to receive the COVID-19 vaccine or be kicked out of the monastery with zero means of support. 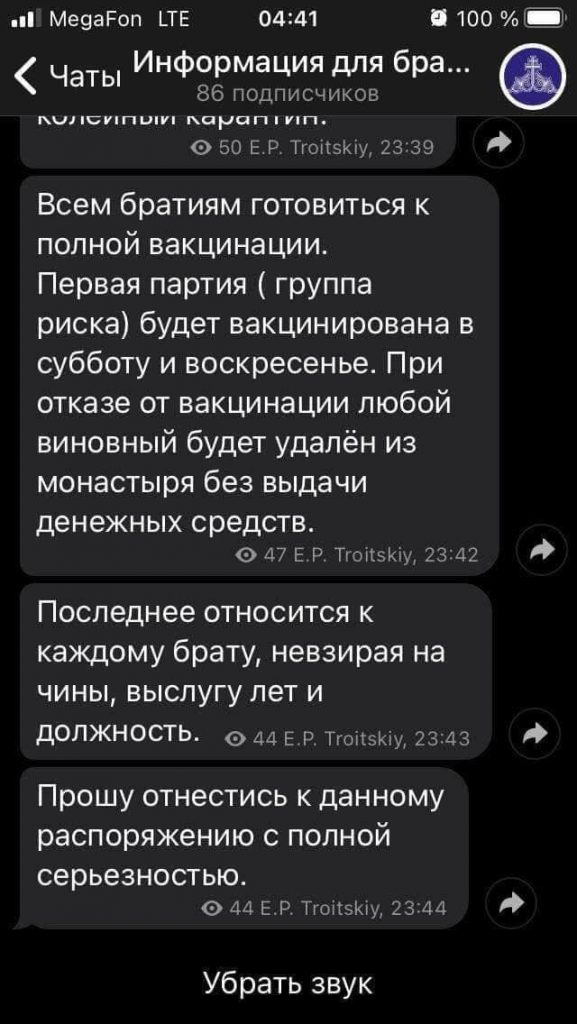 The translation in English reads as follows:

All brothers prepare for a full vaccination. The first batch (risk group) will be vaccinated on Saturday and Sunday. In case of refusal to vaccinate, any guilty person will be removed from the monastery without issuing funds.

The latter applies to every brother, regardless of rank, length of service and position.

I ask you to take this order seriously.

The source of this screen grab had his own comments that should be included for context:

The most total vaccination

This message was sent from the chat of the Valaam monastery brethren. All are instructed to be vaccinated, those who disagree will be evicted.

The viceroy, Bishop Pankraty Zherdev, himself just left the red zone and understands that without vaccination, in the event of another epidemic, the island could lose too many people.

By the way, the fraternal chat in telegram is a good element of the monastery’s infrastructure.

Admittedly, the context is important. Bishop Pankraty had been vaccinated early on back in September 2020, but his acquired protection against COVID wore off over time. This spring and early summer, the hierarch was afflicted with severe respiratory distress with the Delta or “India” strain of COVID-19, and he was in the “red zone” of the hospital, seeing people fighting for their lives and sometimes losing that battle. In his own words (though translated):

“I stand for absolutely complete, one hundred percent vaccination of the entire population of the Russian Federation. This is my position: I was just myself in the red zone, dying, I saw people waiting to die on mechanical ventilation, the question is – when will they die? who came in a grave condition. Therefore, some polemics, some opinions, they are absolutely inappropriate”, the bishop concluded.

In all fairness, one has to appreciate that the bishop used his personal experience to drive his decision. While it is presently unclear how sick Bishop Pankraty himself was, being in the red zone is a terrifying experience in of itself. This is where one sees the doctors in hazmat suits, as though dealing with the most deadly plague, ever.

But how much of a push is too much? Is it right to push for vaccination so hard as to appear to threaten the livelihood of fellow monastics for noncompliance?

In fairness (because I know Bishop Pankraty, having met and talked with him when I visited Valaam), I respect his impulse to take care of his people. Also, since Valaam is one of Russia’s largest centers of pilgrimage, with over 100,000 visitors a year under normal conditions, the monastic brotherhood is kind of the touchpoint for all those visitors. Without a way to block the spread of infection on this island, theoretically and practically, many people have become sick with this illness. A group of my own friends went to a different monastery over the past weekend, and four of them got hit with COVID in short order.

So, it would seem that vaccination would make a lot of sense.

However, there are problems, serious ones on several levels, which have not been addressed and which continue not to be addressed, and as this kind of news unfolds, the problem only deepens.

For one thing, the Sputnik vaccine, like all coronavirus “vaccines” really is not very successful as a solution to the COVID-19 problem. Its short “prevention period” of but a few months suggests that it is not a vaccine at all, but perhaps an “immediate preventative measure” that has to be repeated.

With the large numbers of injury and death resulting from the vaccines worldwide, it makes little logical sense to endanger people multiple times. At the very least, the rush to vaccinate ought to be tempered with excellent testing and development of a treatment that would result in a safe defense against the virus.

Admittedly, another piece of this story – the high likelihood that this virus is bioengineered to mutate and therefore resist any sort of vaccination regime – is also at play here and has not been discussed by anyone since March 2020 when the bioengineering connection and Dr Fauci’s gain of function research endorsement and support was first exposed on any news site.

The second factor remains that of Orthodox Christian bioethics. Sputnik V and other non-mRNA vaccines are derived or tested on HEK293 cell lines, which themselves come from an aborted fetus. Abortion, or even support for abortion, is a grave sin for the Eastern Orthodox Church as it is for the Roman Catholic Church, yet the Orthodox Church has offered no defense or opinion on this issue of any kind at a level that might be considered “official”, and there is wide disagreement among clergy and faithful on this topic. Many people who are concerned for their souls in eternity more than the virus are inclined to pause at this issue, and will rightly resist any pressure from the government and especially the Church, to get vaccinated while this question remains unanswered.

The third factor is that mRNA vaccines, while in many cases not employing HEK293 lines, nevertheless employ genetic restructuring by force, and this is reported to be causing myocardial inflammation and pericardial inflammation. This is the heart, people, whether it is the actual muscle or the structures surrounding it, and that is a big deal.

In short, there are many deaths that have come about after receiving vaccines against COVID, far more than with other commonly accepted vaccines, the vaccine itself does not truly vaccinate against anything, and we have no clear directions coming from any trustworthy sources.

For their part, OrthoChristian’s editors made the decision not to publish any further news about anyone in Church circles’ opinion about the vaccine, for or against, until or unless the Synod makes some sort of statement.

However, it must be noted that COVID-19 has been around for 18 months now, the vaccination efforts have been underway since September last year, and that controversy has grown for nine months, and in all that time, nobody has given the public a comprehensive, honest and trustworthy account of what is taking place. This might be because no one in authority really knows, but not even that much has been acknowledged. Instead, as I have written many times before, we are presented with an ever-changing retinue of propaganda and posturing, mostly from the United States’ authorities, but of recent times this has started in Russia too, and this statement by Bishop Pankraty has similar markings to the news coming from secular sources in Russia, in Moscow especially, which are trying to get around the confirmed “non-mandatory” nature of vaccination, to scare or annoy people into getting the shots.

While OrthoChristian’s decision not to publish any more news is probably wise, it would seem that an public announcement of this and an explanation of why (because we are waiting for something definitive from the Synod and do not want to further add confusion to the faithful about this issue) would be in order. Otherwise, it looks like more of the same:

“But I don’t feel right about this, there are problems, you see…”

“Shut up, you’re being disobedient!”

“You are insubordinate! Shut up and do as I say!”

How is this of God?

Maybe the Russian Church and its concept of obedience is exactly as it needs to be. In all fairness, I am coming at this issue as an American, because I am an American, and we are not people given to blindly following government or government-like authority. That is not how we were raised. Maybe Bishop Pankraty’s message is exactly what his people need.

But it sure is poorly explained, and with all the other examples of poor to nonexistent messaging about this supposedly really serious and deadly pandemic, it is hard for reasonable people to trust what appear to be emotional, or even hysterical, responses. Valaam and Moscow are the two latest examples in a long, sad, and even deadly series of events. May God help us through this to honesty and to handling this situation as He would want us to. It does not look like it is being handled that way now.

This video is in Russian, but English captioning is available.