When Will the US Lockdown Over Covid-19? How Long Will Quarantines Last? Here’s What the Patterns Show Us

Authored by Daisy Luther via The Organic Prepper blog:

Yesterday the World Health Organization officially declared Covid-19 a pandemic (like we didn’t already know this.) As well, President Trump addressed the nation, closing American borders to all flights from Europe and announcing some ways he intends to help the people of the United States financially.

Things are going to get worse – possibly much worse – before they get better. Illness completely aside, this will cause financial problems that many folks will feel for years after the pandemic is over.

The biggest question people are asking now is, “When?”

When will the US begin to see measures being taken to lockdown areas or put people into quarantine? What would that lockdown look like? How long will quarantines last?

We can look at how this has gone in other countries to get a general idea of the pattern. Of course, we’re Americans and we do things differently. Our geography is quite different as is our population density. So this isn’t an exact science. We’re looking at patterns to predict (not in a crystal ball kind of way but an analysis kind of way) what could happen here.

Here’s how things have gone in Italy and China.

We can still learn a lot from observing the patterns of the breakdowns there.

Both of these things play a role in the spread of the virus and containment efforts.

What about China? Well, I don’t trust the numbers and information coming out of China to include them in this model by very much, but note that the situation of which we’re aware has been going on for about 8 weeks. The first cases of a mystery illness were heard of when Dr. Li Wenliang, who later died of the coronavirus, blew the whistle on China on December 30, 2019.

To our knowledge, the quarantines began in Wuhan on January 22. So from the first patients to the initial lockdowns was 23 days. From the date the first noted illness became public to now has been 73 days. From the date of the first quarantines in Wuhan until now has been 51 days. Although the quarantine has been loosened, there are still serious restrictions on movement in China. The country may or may not be getting back to normal, depending on who you believe. If they are not getting back to normal, then this 7-week window is inaccurate.

Back to Europe. Italy, specifically.

On about the 20th of February, three cases of Covid-19 were confirmed in Northern Italy. Officials acted quickly to lock the area down but unfortunately, their quick actions weren’t enough. What began as a lockdown of a few villages in the Lombardy region in northern Italy on the 21st spread to a nationwide lockdown on March 9th.

From the first patients to local lockdowns was one day. From the first patients to the entire country being quarantined was 22 days. In just 22 days, the virus had spread to such a degree that an entire country has suspended mortgage payments, stopped all non-essential movement, and ceased business. Their medical system is so overwhelmed that they are forced to choose who to save and many people over 65 are not even assessed as the hospitals reserve their resources and space for those who have a higher chance of survival.

Less than a month ago, everything was normal in Italy. Tourists were making wishes at Trevi Fountain, people were enjoying sunny days having coffee with friends on a cafe patio, and businesses were thriving.

As of yesterday, Italy had 12,462 cases of Covid-19 and the death toll leapt from 196 to 827. In a day. Everything has been ordered closed except food stores and pharmacies.

This is how fast things can go.

And Italy is currently on day 25 since the first 3 cases were diagnosed. If it took China at least 50 days of quarantine, then Italy is potentially halfway through the worst of this outbreak.

Countries across Europe are slamming their borders shut in an effort to contain the virus. Whether they’ve acted soon enough remains to be seen.

Where is the United States in all this?

The first case of Covid-19 was diagnosed in the United States on January 22nd in Snohomish County, Washington. Incidentally, that was the same day the city of Wuhan went into lockdown.

We have already had some small regional lockdowns and people in quarantine after traveling, but the quarantining of large groups of people has not yet occurred in the US. YET. We are on day 50 since the initial case was diagnosed in the United States. However, the first case of community spread was on February 26, and this may be a more important marker than the first case in a country the size of ours. “Community spread” means the illness was not contracted through traceable means, like a family member with the virus or travel history to places where the illness was running rampant. So if we’re counting from the first day of community spread, the US is on day 15.

If massive lockdowns are occurring on about day 22-23 in other countries, that means we may have 7-8 days before we see major lockdowns and quarantines here. That would put us at March 19th or 20th. We may see some early lockdowns of cities or regions where the virus is rapidly spreading like Seattle and New York City. The lockdowns in other countries expanded in about a week to encompass greater geographic areas and larger numbers of people. This would put us at approximately March 26-27th.

Now keep in mind, this is not engraved in stone. I don’t trust our numbers any more than I trusted China’s because the testing protocols have been nothing short of disastrous. First, faulty tests were sent out to health departments across the country and then the criteria for being tested was so narrow that many cases were likely overlooked. It took one person who caught the virus through community spread 10 days to be tested because she didn’t fit the criteria.

The US might still manage to get a handle on this outbreak and contain it. A successful treatment regimen could be discovered. But if you’re looking for a general idea of when we may see lockdowns and quarantines, this pattern seems to be repeating itself and possibly speeding up.

This chart shows how far behind Italy other countries are in the grand scheme of this outbreak. Based on this chart we are 11.5 days behind Italy, who instituted their country-wide quarantine three days ago. If this chart is correct, we’d be looking at massive quarantines on approximately the 20th as opposed to the more gradual schedule used by China. 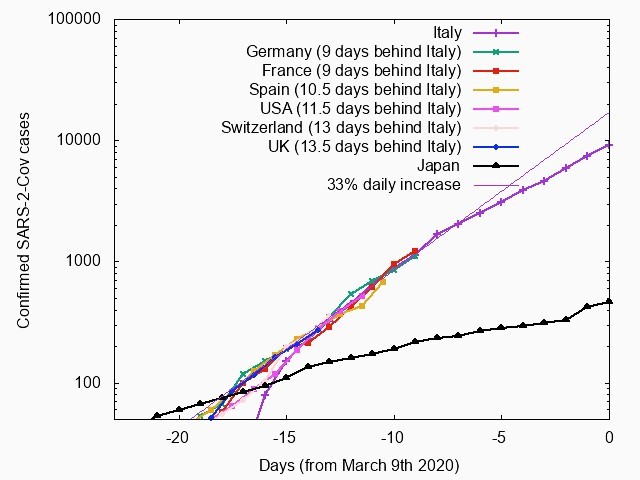 I have to stress that whether you are personally concerned about getting the coronavirus or not, a mandatory quarantine will still affect you and you’ll want to be prepared. Otherwise, those folks you made fun of for buying toilet paper will be laughing at you for using the pages of a phonebook to wipe.

So what’s going to happen?

It’s impossible to predict exactly how the coronavirus is going to affect the United States. Americans are far more independence-minded that folks in China and much less likely to cooperate with draconian containment measures. At the same time, healthcare here is outrageously expensive for those of us who are uninsured, which up until this point may have caused many people to skip medical treatment or diagnosis, potentially spreading the virus faster.

However, as of today, March 12, a number of universities across the country are shutting down classes until April. Workplaces are taking more thorough sanitation measures. Large gatherings, conferences, and conventions are being canceled. The NBA has canceled the rest of the season, the MLB has canceled spring training, and NCAA tournaments have also been canceled. (source) Last night, President Trump announced the suspension of air traffic from the EU much to the outrage of Europe, and today he said that suspension of domestic travel is also a possibility. (source)

While we aren’t in lockdown yet, anyone who is paying attention can see that we’re certainly headed in that direction.

There are some things that could change this. If we begin having a lot more positive cases in clusters, it could accelerate the timeline. On the other hand, if the growth in the number of cases slows down, it would show that containment efforts are working and it might never get as far as government-mandated quarantines.

Either way, if you aren’t prepared, I would strongly recommend you put some plans in place.

It’s time to make some decisions.

While again, I must stress, we don’t know for sure what will happen, it’s time to make some decisions just in case.

Use this guide to get prepared for the possibility of a Covid-19 lockdown.

You’re the only person who can answer these questions for yourself and your family. But you should probably answer them soon, or the decisions will most likely be made for you.

Daisy Luther writes about current events, preparedness, frugality, voluntaryism, and the pursuit of liberty on her website, The Organic Prepper. She is widely republished across alternative media and she curates all the most important news links on her aggregate site, PreppersDailyNews.com. Daisy is the best-selling author of 4 books and runs a small digital publishing company. You can find her on Facebook, Pinterest, and Twitter.