There’s a bit of news in the case of Jeffrey Epstein. He’s the convicted sex offender who somehow managed to commit suicide in a New York jail last month while he was supposed to be under close watch.

My public information request about his death –  has been formally denied.

Shortly after Epstein died in August, I filed a Freedom of Information request for public documents about his injuries and medical care for both the day he died and earlier, in July, when he reportedly attempted suicide.

Members of the public and press are entitled to review documents and communications generated and collected by federal agencies and officials because– we own them. However, federal agencies often delay, obstruct and resist the release of such documents.

Guidance from FOI court cases and the executive branch indicates that federal agencies are supposed to make every effort to release as much information as possible– and at least partial information if exemptions are at play.

In the case of the Epstein documents I requested, the federal Bureau of Prisons responded by stating that it is withholding all of the documents entirely.

The Bureau cites six exemptions, including that releasing the information “could reasonably be expected to endanger the life or physical safety of an(y) individual.”

One of the exceptions cited by the Bureau of Prisons in withholding all information related to Jeffrey Epstein.

The Bureau of Prisons invited me to keep refiling in the future to see if the status changes.

The FBI is said to be investigating how jail authorities missed Epstein committing the act of suicide in their custody while awaiting trial on new sex trafficking charges.

The letter from the Bureau of Prisons is below: 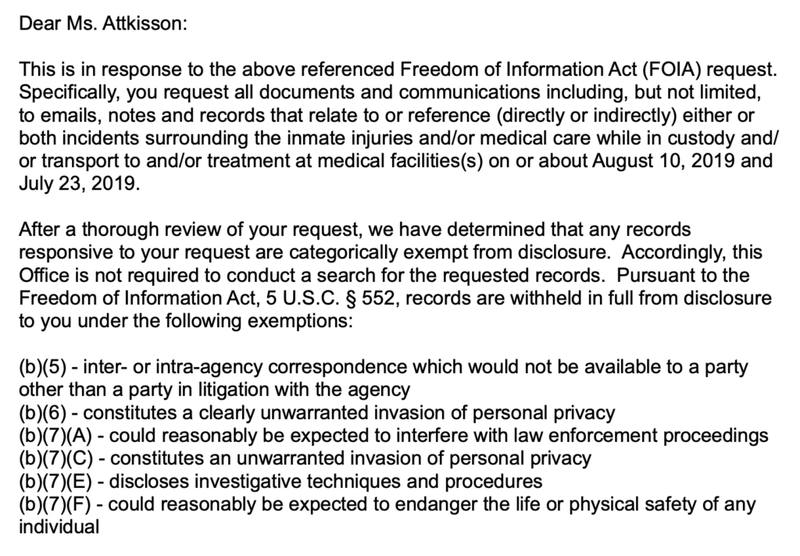