After slowly reopening the epicenter where the novel coronavirus originated, authorities in China have begun the herculean task of testing all 11 million residents in Wuhan following an uptick of new cases that have sparked fears over a second wave of infections.

Internal documents cited Monday by Reuters indicated that Wuhan officials were planning to engineer a city-wide campaign of nucleic acid testing over 10 days.

“To better make use of nucleic acid tests as a monitoring tool and in accordance of the state cabinet’s requirements to expand testing, we’ve decided after consideration to conduct testing for all residents,” according to one of the questionnaires sent to residents of the city’s Wuchang district, according to Reuters. 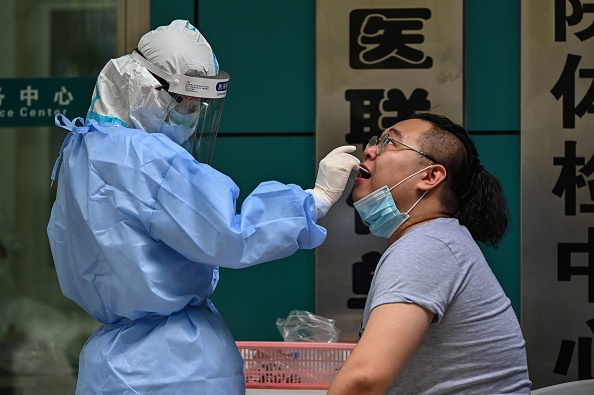 A medical worker takes a swab sample from a man to be tested for the COVID-19 novel coronavirus in Wuhan, in Chinas (Photo by Hector RETAMAL / AFP)

In at least two of Wuhan’s main districts, announcements of the ambitious campaign have been shared door-to-door and an online questionnaire seeking information about individual’s test results, and whether they should be deemed high-risk, were sent out on Wednesday, according to Reuters.

The notices sent out in the Wuchang district said the campaign is aiming to test all residents, but stressed the necessity to test anyone labeled as part of one of the 12 “key” groups, which include confirmed and asymptomatic COVID-19 cases and their close contacts, any individuals with a fever, as well as school, medical, transport, bank, supermarket, government employees and anyone returning from overseas business, or anyone planning to travel outside the city for work. (RELATED: When Will The Country Reopen, And Will There Be A Second Wave? Your Questions Answered)

The city of Wuhan was first put on lock down Jan. 23 and was relieved from their confinement on April 8. Over the weekend Wuhan reported six new cases, according to Reuters, the first reported infections since the restrictions were lifted.